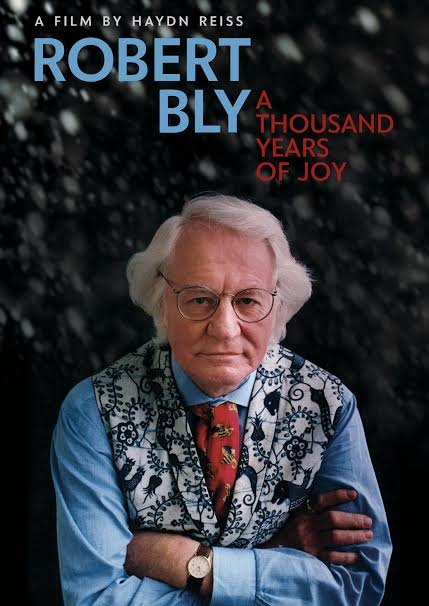 Watching the film was a trip down my memory’s lane, dating back to meeting the National Book Award-winning poet in the sixties. I was in boot camp training at Ft. Riley, Kansas, home of the Army’s First Division, the Big Red One. I intended to follow our family tradition, which gave our name to Ft. Bliss, Texas. I was on my way to the American War on Vietnam.

Bly and others in the group Writers Against War, including poet Allen Ginsberg, came to Kansas with their poetic, prophetic message. They initiated my doubts about America’s War. Bly spoke from military experience, having served in the Navy during World War II.

Robert possibly saved my life, and certainly my soul, if I had gone to war those 50 years ago.

I eventually resigned my officer’s commission, accepting the consequences, which included alienation from my family. Robert possibly saved my life, and certainly my soul, if I had gone to war those 50 years ago. I have enough of what is described as “Post Traumatic Stress” and “moral injury” from having been raised on military forts.

Bly has been a life-long radical, which this film documents. His deep roots are Norwegian, farmland, Mid-Western, Minnesotan, and Lutheran. Bly is an uncle figure to many. He provides an image of a deep, nurturing, strong masculinity, distinct from the rigid military model under which I was raised. His male model was militant yet caring; it emboldened my courage to reject war-making.

“Why don’t we lift our voices and cry over what is happening today,” Bly lamented during the first American War against Iraq. I echo this today, as the U.S. continues to widen its war-making.

Robert Bly has made a big difference in the lives of many. He brought a contentious, creative presence into his prophetic work. A big man, he has a Viking-like quality.

Bly brought the reverent, oral tradition of
taking a poem into your heart.

Bly brought the reverent, oral tradition of taking a poem into your heart and soul, memorizing it, and reciting it, to the delight of thousands. He wrote his own great poems, as well as essays, edited books, and supported peers and young poets and writers. He translated Chilean Nobel laureate Pablo Neruda, who appears in the film, and many other lesser-known poets, expanding their readerships. Many poets and writers attest to Bly’s importance in this film.

Bly helped create contexts within which people could grow, including the Great Mother Conferences and men’s gatherings in the woods. Bly did not agree with one of my Neruda translations, which I did not change to please him. My Spanish is better than his. I think that he appreciated my standing up for my translation.

Among my friends was Elissa Melamed, who wrote the book Mirror, Mirror: The Terror of Not Being Young, which is about the double standard of aging. When they were in college, Bly invited her out on a date. She accepted. That date was to go to a firing range.

The first of many of Bly’s gatherings that I attended were the Great Mother Conferences, where he honored mythology and the feminine. His co-teachers included novelist Ursula Le Guin and Gioia Timpanelli, often called the “dean of American storytelling.”

Robert was not an easy man in the decades that I had regular contact with him.

Robert was not an easy man in the decades that I had regular contact with him. He loved a good conflict. We argued, as I did with his key collaborators — the psychologist James Hillman and the drumming Irish-American storyteller Michael Meade. They engaged in spirited, friendly male banter. My arguments with them were often about gender.

Few American poets have sold many books or become famous during their lives. Bly’s best-selling book Iron John, an analysis of a Grimm Brothers story, brought him fame. Bly often taught from mythology and ancient stories. I first met the noted mythologist Joseph Campbell at a Bly forest gathering.

Bly invited me to teach with him and others at a men’s conference in the Mendocino Woodlands. I came prepared, not only with words, but with buddies — Capt. Ray Gatchalian, a green beret medic in my vets group, San Francisco artist Doug von Koss, and Larry Stefl, a musician with The Sons of Orpheus.

I anticipated that Robert would challenge me. When he did, Doug and Ray merely stood up at my side. They did not need to say anything. Much of male intimacy is side-by-side, as well as covering someone’s back. Larry played Black Orpheus on the guitar and led the room in singing (scatting) along. Strengthened by their firm masculine presence, I continued. I do not remember what the issue, the challenge, or my response to Bly were on that day. What I do remember is Ray, Doug, and Larry backing me up.

“Wake up” has been one of Bly’s essential poetic, spiritual, and political messages. “Don’t go back to sleep,” he would quote the 13th century Sufi poet Rumi, whom he translated and brought forward into American culture. Bly calls us “to disappear into the wild.” He translated the great Spanish poet Antonio Machado, who ends a poem with the words “what have you done with the garden entrusted to you?”

Hayden has made previous films including Every War Has Two Losers, about poet and conscientious objector William Stafford, and Rumi: Poet of the Heart..

Learn more about the film at robertblyfilm.com.

Read more articles by Shepherd Bliss on The Rag Blog.

[Shepherd Bliss has operated the Kokopelli Farm in Northern California since 1992, has contributed to 24 books, and recently retired from college teaching. Contact him at 3sb@comcast.net.]