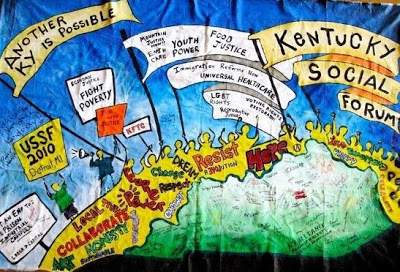 At the dawn of the new century, a new tradition, inspired by the hundreds of years of resistance, was launched… This disparate assembly shared one idea: ‘Another World is Possible.’

The history of resistance

Just as globalization today has its roots in five hundred years of trade and investment and in exploitation and capital accumulation, the global justice movements of our day also have their roots in the patterns of resistance since the beginning of capitalism.

In a recent article (“Long Before Seattle: Historical Resistance to Economic Globalization”) Zahara Heckscher points out that: “In virtually every society the Europeans invaded, people rose up to protest the cruelty of slavery, theft of land, and plunder of resources.” While many of the protests were local, provoked by singular transgressions, and were inwardly oriented (from destroying crops to committing suicide to fleeing), many were national in their mobilization or even international.

Heckscher provides examples of resistance movements against globalization that occurred well before “the Battle of Seattle” in 1999. For example, the Tupac Amaru II uprising in Peru (1780-1781) was a multi-class, multi-ethnic rebellion of 6,000 armed protestors who opposed the effort of the Spanish colonial government to impose tariff reductions to flood local markets with cheap Spanish goods, increase taxes, and in other ways force economic integration between the colony and the Spanish economy.

Heckscher also provided the example of nineteenth century cross-national campaigns to ban slavery. She described the social movements in Europe that vigorously opposed the brutal Belgium colonial administration of the Congo at the end of the nineteenth century. She reflected on the efforts of the First International Workingmen’s Association in Geneva to prohibit manufacturers from importing strikebreakers to replace striking workers. In the process workers from Europe and North America began to mobilize in solidarity against an increasingly cross-national capitalism.

Finally, in her brief survey she mentions the Anti-Imperialist Movement that opposed U.S. occupation and control of the Philippines after 1898.

Ever since the emergence of the Bretton Woods system and the establishment of the power of the International Monetary Fund and World Bank, peoples in poor countries have resisted the contracts their states entered into with global capitalism. Since the 1950s, workers and peasants have gone into the streets in countries as varied as Jamaica, the Dominican Republic, Venezuela, and India to protest the cancellation of programs providing food subsidies, low cost public transportation, free water and sanitation, and other public services.

In November 1999 in Seattle, the visibility of such protests assumed a new dimension as thousands of protestors, representing a variety of issues and groups, shut down the annual meeting of the World Trade Organization. In the North American public mind, the “anti-globalization movement” was born.

The New Internationalist, a magazine representing “the people, the ideas, the action in the fight for global justice” published a chronology of “some key moments of the global movement 1994-2001.” They symbolically identified the initiation of the current campaign for global justice with the public pronouncements of the indigenous Zapatista rebel movement in the southern Mexican province of Chiapas on January 1, 1994.

Their cry of “Ya Basta” (“Enough”) was in response to the fact that the North American Free Trade Agreement (NAFTA)went into effect on that day. A significant part of the NAFTA program was to be the privatization of communally owned land in Mexico.

Additional “key moments” included protests against the World Trade Organization, formed in 1995, an international conference against neo-liberalism held in Chiapas, Mexico, mass mobilizations against the Asian Pacific Economic Community, workers in 21 countries protesting the sacking of Liverpool dock workers, and repeated mobilizations against meetings of the International Monetary Fund, the World Economic Forum, and other public manifestations of neo-liberal globalization. 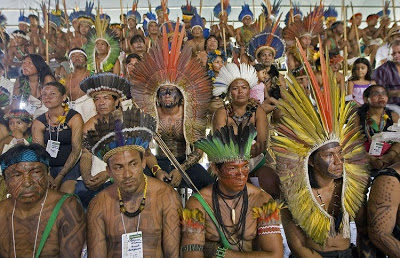 At the dawn of the new century, a new tradition, inspired by the hundreds of years of resistance, was launched. Ten thousand activists — representing 1,000 groups from 120 countries, industrial and agricultural workers, indigenous peoples, environmentalists, anti-globalization activists — met at the World Social Forum in Porto Alegre, Brazil, in January 2001. This disparate assembly shared one idea: “Another World is Possible.”

Naomi Klein reported on this first WSF highlighting its exuberant and chaotic character. Neither defining it as a strength nor a weakness, she pointed out the fact that “…what seemed to be emerging organically out of the World Social Forum (despite the best efforts of some of the organizers) was not a movement for a single global government but a vision for an increasingly connected international network of very local initiatives, each built on direct democracy.”

Subsequent to the first WSF, the organizing committee prepared a “Charter of Principles” which included the following: providing an environment for open and democratic debate; becoming a permanent process of building alternatives, particularly building a “world process”; bringing together and linking civil society groups, NGOs, and social movements from all countries; and increasing “the capacity for non-violent social resistance to the process of dehumanization” and introducing “onto the global agenda the change-inducing practices” that could create a “new world in solidarity.”

Each year after, the WSF met in Brazil or India, or Kenya, or Venezuela. In 2007, a U.S. Social Forum was held in Atlanta, Georgia. Ten thousand people, mostly young and people of color attended the hundreds of panels and plenary sessions. Over 100 local and national groups displayed their literature and dialogued with conference participants.

As their call suggested: “The US Social Forum is more than a conference, more than a networking bonanza, more than a reaction to war and repression. The USSF will provide space to build relationships, learn from each other’s experiences, share our analysis of the problems our communities face, and bring renewed insight and inspiration.”

Now activists from nearly 100 organizations are preparing for the next U.S. Social Forum which will take place from June 22-26 in Detroit. It occurs in the midst of a global economic crisis, multiple wars, the rise of neo-fascist forces around the world, and efforts of the United States to forestall the rising global resistance to neoliberalism.

The National Planning Committee has indicated that the USSF will address movement building, organizing and outreach, and improving structure and programming of the USSF movement. Of particular relevance to 2010 are the following goals:

The goals and vision of the U.S. Social Forum are truly ambitious. It is unclear how the Social Forum movement can create enough ideological commonality, organizational structure, leadership sensitivity to its grassroots base, and global solidarity to make another world possible. It is clear that the Social Forum movement is part of a long history of resistance and struggle against capitalism, and as such is as necessary now as at any time in history.