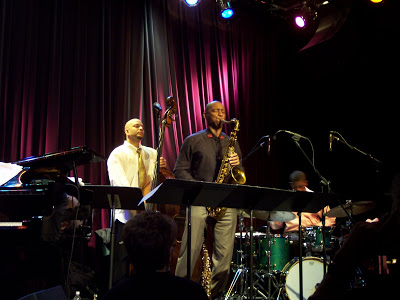 Man, can these guys swing !!! The Branford Marsalis Quartet played a four-night gig in Seattle at Jazz Alley, and I was fortunate to hear about it early enough to get a seat for Friday night. First a small disclaimer – technically, it was not the Branford Marsalis Quartet, since drummer Jeff “Tain” Watts stayed at home taking a break. The great news, though, is that the quartet and their audience suffered not one whit for this personnel change. The sub-ing drummer was 18-year-old Justin Faulkner, a Philadelphia native who rendered a couple of awesome solos in the course of the evening.

The ‘regular’ musicians in this band are among the preeminent in their field. Eric Revis is a virtuoso with his bass, and his bald head glistened with the perspiration of his effort. Very fast, very precise, and an awe-inspiring soloist.

“Jack Baker,” from the album Braggtown

Pianist Joey Calderazzo had a hard time sitting still during his first solo effort. I feared he might become one with the audience on more than one occasion he was so engrossed in his dynamic artistry with the keyboard. 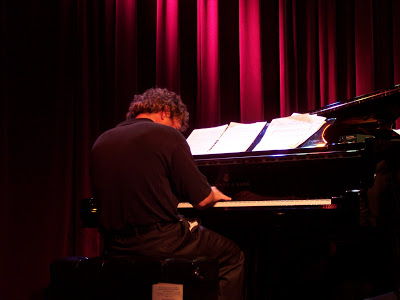 But the quiet star was the Marsalis of the mix. I have seen three of this Family play in my travels. Wynton played Benaroya Hall in Seattle with the Lincoln Center Jazz Orchestra several years ago and I had the pleasure of being there. It was pure luck that I saw Delfeayo’s quintet in 1996 at Snug Harbor on the east side of the French Quarter in New Orleans. And now I have the privilege to witness Branford weaving his musical story with Friends he has played with for 10 years (well, not Justin).

The reason I said all that about the various Marsalis Brothers is that it is virtually impossible to convey their ‘presence’ in words. It is as though I forgot how humble and sincere the Marsalis Family are. So unassuming … But in Branford’s case on Friday night, his music was brilliant. He alternated tenor and soprano sax all evening, displaying complete facility with each. Awesome musician, there is no more I can say.

If ever you hear that these guys are coming to your town, don’t even think about it – buy tickets !! You won’t regret a moment of the experience, ever …

For another review, see Hugo Kugiya’s Branford Marsalis’ quartet is at the forefront in Jazz Alley show in the Seattle Times.

This entry was posted in Rag Bloggers and tagged Jazz, Music. Bookmark the permalink.