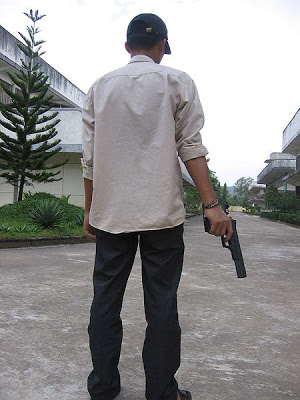 These are not baby killers, they are babies who kill.

CARTAGENA DE INDIES, Colombia — Sicarii (Latin plural of Sicarius [‘dagger’]; later used for a contract-killer) is a term applied, in the decades immediately preceding the destruction of Jerusalem in 70 CE (probably), to an extremist splinter group of the Jewish Zealots, who attempted to expel the Romans and their partisans from Judea.

The Sicarii used stealth tactics to gain their objective. Under their cloaks they concealed sicae, small daggers, from which they took their name. At popular assemblies, particularly during the pilgrimage to the Temple Mount, they stabbed their enemies (Romans, Roman sympathizers, Herodians, and wealthy Jews comfortable with Roman rule), lamenting loudly afterwards, along with the crowd, to escape detection. Literally, Sicarii meant “dagger-men.”

In the past few months I have reported on life and death in Colombia. You have caught a glimpse of the violent forces at play that ordinary Colombians experience every day.

We’ve seen the failed peace processes and the complicity of our U.S. ally, the Government of Colombia, at the highest levels in the violence, and in one of its root causes, the multi-billion dollar trade in cocaine. We’ve looked also at what we, U.S. taxpayers, are currently funding in Colombia in the way of more bases, more arms, and more potential combatants, our own troops.

I have chronicled hundreds of thousands of deaths, two million displaced citizens, torture, rapes, wars between and among the various violent factions, and chainsaw massacres. In 20 postings, you might think that I’ve covered it all. Sadly, I have not. There is one more horrifying phenomenon which requires our attention to round out our picture of one of the most violent societies on earth. These are not baby killers, they are babies who kill.

Child assassins, hired by paramilitaries, drug gangs, or just anybody with a grudge, killed 6,999 people in Colombia last year, El Tiempo, published in Bogotá, reported recently. Their age makes it easier for them to approach and kill their targets. Besides, they work cheap.

In June 2009 an eight-months-pregnant lawyer from Medellin was shot through the head. One of the two assassins involved was 15 years old. The recent murder of an unknown man in a BMW in Bogotá is suspected to have been committed by a 16-year old.

As El Tiempo reports, almost every single day someone in Colombia is assassinated by a minor. Generally speaking, these children are part of criminal gangs involved in robberies and are recruited for murder because they are less likely to be bothered by security forces and because they are inexpensive.

The less experience a sicario has and the lower profile the victim, the more attractive their use becomes, while remaining as efficient as the work of more experienced killers.

According to El Tiempo, many sicarios in Medellín are sons and nephews of the hitmen used by Pablo Escobar’s Medellín Cartel in the late 1980’s and early 1990’s. The city is famous for producing assassins, feared throughout Colombia.

One of the sicarios the newspaper talked to received 200,000 pesos (U.S. $97) for his first murder. “I was 13 the first time I did one in. A guy from the neighborhood who was on bad terms with the husband of his daughter contracted me. I approached him from behind and put the gun close to his ear,” the kid told El Tiempo.

Colombia’s second city of Medellín has been the most dangerous in the Americas ever since it became synonymous with drugs and the “kingpin” trafficker Pablo Escobar.

Last year the city of two million saw almost 4,000 violent deaths, according to a report just released by the Department of Criminal Investigations and Judicial Support.

Escobar, legendary head of the Medellín cartel, killed in a shoot-out with police in 1993, left a violent legacy which haunts the city today.

He created an army of sicarios drawn from poor neighborhoods in the outer reaches of the city.

The sicario philosophy was that it was better to live fast and die young, and Escobar lavished money on these desperate children and sent them out to do his dirty work, killing rival drug dealers, politicians, judges, policemen, or anyone who crossed his path.

He promised a bounty of $2,000 for every policeman killed, and his sicarios executed more than 300. 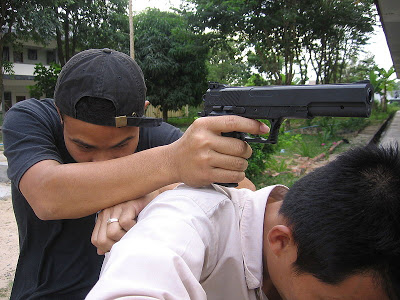 Today’s sicarios are guns for hire. One of the most notorious sicario gangs, called La Terraza, or The Terrace, after the part of Medellín in which it was born, is in a fight to the death with its former paymaster, the feared right-wing paramilitaries.

Their “enemies,” once known as the Autodefensas Unidas de Colombia (AUC; United Self-Defense Groups of Colombia) blocs Cacique Nutibarra and Bloque Metro, have been reorganized and replaced by the resurgent paramilitary groups The Urabá Bloc or Urabeños, previously led by Daniel Rendon (also known as “Don Mario“), and the Paisas, heirs of paramilitary leader “Don Berna“; they also have links with the “Office of Envigado,” a criminal organization in Medellín.

According to authorities, the child assassins are the lowest in the criminal food chain and receive only a small part of what is paid for an assassination. Criminal organizations charge up to 50 million pesos (U.S. $24,000) for a murder, but the juvenile killer only receives 1-6 % of this.

I’m ‘Sicariato’ because ‘I love you’

Sicarios do not exist by themselves. They are the product of a more complex system of criminality ready to hire assassins as young as 12 to guarantee its power through terrorism. Of course, young people ready to do so come from realities of marginalization, where opportunities of education and a good living are distant mirages. Poverty and marginalization are always the cause of violence. Mafias offer hopeless young people an opportunity in life.

Many of these youths believe that they must do something to support their families, for the same reasons that many become involved in prostitution. A society that denies entrance into the systems of education, social protection, and employment plays a great part in whether a likely boy accepts the invitation of the mafias. “El Patrón” (the boss) is the one who contracts the boy to do the job (el trabajito), and then there is a relationship of loyalty. A sicario will have the same fanatical commitment as the most professional royal bodyguard of Europe.

Asked why he kills persons for money, he will answer in almost the same way as such a retainer: to help his family, because he loves his mother and wants to give her a better life.

Underage actors in Colombia are into numerous crimes, and this is not new. Drug trafficking and insurgent organizations have recruited many young people, with dramatic impact.

However, when a 15-year old is involved in a murder, as happened with the hit on the pregnant lawyer in Medellín, surprise and indignation return. Only a month earlier, in the same city, a 17-year old entered the General Hospital to finish off a patient.

Authorities reported that in Monteria, capital of Cordoba Department, seven minors were arrested for acting as henchmen in a series of murders in 2009.

This abominable phenomenon occurs all over the country. One study found that in Cali, in 2008, one in every five homicides involved a minor. Bogotá is part of the same trend, according to police: in 2007, 11 teenagers were arrested for homicide there; in 2008 the figure rose to 18. So far in 2010, there have been 19 teenage killers, most between 15 and 17.

Since the beginning of 2009, alarm bells about the growth of the murder for hire in Colombia’s cities have sounded. The case of Medellín, the capital of Antioquia Department, and its metropolitan area is the most worrying. Over one long weekend there were about 22 violent deaths in the Aburrá Valley, while 11 murders were committed in 11 hours in Envigado and Bello. In the last seven months in Medellín 1,081 homicides were reported.

Authorities also warn of the consolidation of “collection agencies” in Cali, where gang feuding has increased homicide rates. In Cartagena, 77 of 105 violent deaths during the first half of 2009 involved hired killers.

Trained killers from Colombia are in the Mexican drug wars

Since Mexican President Felipe Calderón declared war on drug cartels in 2006, the death toll there has climbed to 18,000.

Colombia exports many world class products; recently it has been discovered that itexports trained and experienced sicarios to Mexico. The movement through Mexico of 90% of the cocaine consumed in the U.S. has increased violence in the war of cartels there. Now we learn that sicarios who made their bones in Colombia as youths have been exported to Mexico and elsewhere. The hallmarks of Colombian violence are apparent in thousands of executions that occurred in 2009, according to the U.S. Drug Enforcement Agency (DEA).

According to La Reforma, published in el D.F. (Mexico City), “A recent poll of 4,600 students in the state of Chihuahua revealed 40 percent of them aspire to be hit men… They would rather live a week like a king than have 70 years of misery.”

Borders do not stop the Colombian gunmen. Internecine struggle between organized crime gangs and drug trafficking has even led to attacks in Buenos Aires (Argentina) and in Paraguay, Brazil, Ecuador, Panama, Guatemala, and Spain by Colombian sicarios.

Murder on a motorbike

Small motorcycles are a primary means of transportation in Colombian cities for many. Cartagena has 19,000 registered and an unknown number of unregistered, or falsely registered, “moto-taxis” that will take anyone on a wild ride through traffic for 2,000 pesos (about a dollar). There must be 10 times that many motorbikes. They are everywhere.

“Motos” are the favorite mode of transportation for the sicarios also. One guy drives and the shooter rides behind, they pull up behind the victim, dispatch him or her, and quickly escape into the flood of other motos that fill the streets.

Typical is this short paragraph from yesterday’s local paper:

A 42-year old man was killed last night with four shots in the parquedero [parking lot] of a well known fast food restaurant on Street 116. The prompt reaction of the police led to the arrest of one of the gunmen, one of two men on a motorcycle.

Or this , from a few days ago:

On Sunday at 10:30 pm Jose Amador Mora was killed, one of four candidates for mayor of Viotá [Cundinamarca], a suburb of Bogotá…

This crime happened 72 hours after the elected mayor of the municipality, Rutba Jose Navarro, was killed Friday by two hitmen.

According to authorities, Amador Mora, affiliated liberal, was caught as he walked through the town market place by two hired killers on a motorcycle, who gave him six shots in different parts of the body.

One more story of thousands:

On his birthday, the 31st of December, Juan, better known as ‘Infierno‘ did not receive the customary hug and Happy Birthday greetings, instead, ‘I felt the tingling of three bullets, two in my back and one at my waist.’

Half an hour before the attack, in the populous neighborhood of Dosquebradas San Judas, Infierno left a man called ‘Diablo‘ with a knife through his neck, which shattered his vocal cords.

But Diablo and his friends are not the only problem for Juan.

His life was threatened four years ago when he began smoking marihuana and bazuco (crack made from cocaine paste), and snorting heroin because, he says, he was tormented by the murder of his brother. With his gang, Te Melenos, and the same drug that feeds the industry, he encountered the underworld, the power of guns, and the sight of death.

The… ‘Grim Reaper’ has pursued him since 2004, when for the first time with his comrades, he landed (strong-armed) a man and, not content with stealing, cut his throat.

The scene was repeated four times that week, the prize for Juan after the distribution: 20,000 pesos, [about $10 U.S.] …[He] confessed [the killings] in front of his grandmother, an obese woman with a toothless smile.

The tenderness of the old woman vanished with the chilling confession of her grandson, 17 years old. She only managed to cover her face with her hands.

Colombia has hundreds or thousands like Juan who are ready to kill. Cheap.