The Future of Agriculture : Genetics and the Limits of Oil 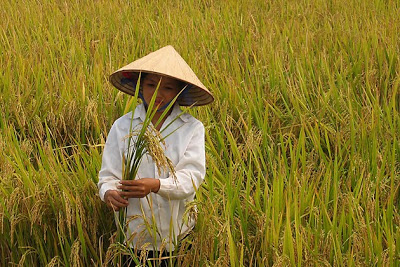 Agriculture, genetics and a sustainable future…

…the oil requirement for U.S. food production and transportation will no doubt loom as a much bigger factor, forcing a restructuring of the food industry.

An old friend, Val Liveoak, posting on a Rag-junkie list, drew my attention to this interesting article on genetic engineering and its problems.

This got me thinking along the following lines. There are certain problems that, by its nature, genetic engineering can solve in a seemingly miraculous fashion. In the case they mention, the plants seem to have been made successfully insect resistant which takes less insecticide (until the insects evolve a resistance to the plant gene). On the other hand the other gene change making a crop plant herbicide resistant, while requiring use of Roundup herbicide, was encouraging fast natural selection of weeds resistant to that herbicide.

In other words genetic engineering can sometimes give you a narrow targeted benefit for a time as an alternative to selective breeding. But the latter often offers deeper more realistic solutions. Good stable solutions to environmental problems take a long time to evolve, and take the combined orchestration of many genes, in ways we are only beginning to understand. Only recently can we read genomes and relate this information to the plants we eat and use.

For example the best attempts by even the best genetic engineers to tinker with the genes of a common potato to try to make it more resistant to a cold arid climate would no doubt be an utter and complete failure when compared to the more traditional breeding approach. We simply don’t now have much more than an initial idea of how the many genes we can now decode are somehow able to cooperate to produce a successful organism.

One had perhaps best start with an Andean Peruvian strain of potato that is well adapted to living in such harsh regions. Then a practical horticultural expert might do multiple generations of cross-breeding with other useful potato strains to come up with a good hardy suitable species, even though this may still have some troublesome quirks. In the United States a century ago, mules, while being infertile, were still widely used to solve practical agriculture power problems.

We are beginning to understand in a scientific way the details of such things as how and why plants survive harsh conditions, and the necessary trade-offs involved. It is proper to expect that the public sector should do open pro bono research, along similar lines to how the NIH was funded for decades, with wide public benefits. Intellectual “property” with wide public benefit in medicine and food production will need to be shielded from the pattern of private corporate profiteering that was somehow tolerated as normal until recently in our wildly-overextended, debt-ridden, infinitely expansionist global economy.

Here in the USA, a shortage of cheap fuel will almost certainly become apparent during the next five years. To help you understand why, here is the link to an excellent introduction to petroleum energy problems by Gail Tverberg of Energy Bulletin, together with some of her conclusions:

Oil production is reaching its limit: The basics of what this means

…There are many views of the task ahead. Some think more research is the answer, or more nuclear, or improved electric transmission plus wind turbines, or electric trains. To a significant extent, these views depend on a person’s view of the timeframe involved, their analysis of where we are now, and their view of how much or how little international trade will be affected in the years ahead.

My personal view is that the main task we should be focusing on now is how to move to a much simpler system—one that depends mostly on locally grown food and locally manufactured goods. This will likely mean a much lower standard of living. Limiting population should probably be a goal, because it will be easier to have enough for all if there are fewer mouths to feed.

I do not see climate change legislation as terribly helpful. Cap and trade will add huge overhead to the system—something we really cannot afford right now. Peak oil is likely to mean a continuing major recession, and a natural decline in fossil fuel use. To me, we would be better off spending our resources developing local agriculture and local manufacturing, and perhaps even sailing ships.

Since monoculture of crops is helping to encourage a lot of the bad habits of corporate agriculture (see Paul Roberts’ book, “The End of Food”), why not solve two problems at once? Why is our normal city school education blind to agriculture? Why not encourage residential rainwater harvesting, and building rich absorbent organic soils appropriate to localized backyard agriculture as preparation for involving a high percentage of the local population involved in food production? If we believe external circumstances will eventually prod us along in that direction, why not raise our consciousness now and get a head start?

If we are going to have a safe and sustainable future fifty years from now, we are going to have to limit population and live a harder life, involving more of our time spent on growing and obtaining food. Everyone may have the ultimate pocket gadgets to stay in touch, but I think local community organization is still going to have to come back in some sense, maybe like the old Israeli agricultural cooperatives.

I think staples, grain and legume and vegetable oil production should be socialized like the ancient Roman daily grain allotment, whereas fresh produce should be more a free enterprise small farm local economics. Trucks and highways will largely have to give way to rail, which is slow and limited in range but very energy efficient. Slow water transport is so inherently efficient it will make a comeback.

This is what I see as a relatively optimistic well managed quasi-socialist scenario for the USA. You don’t have to go far to find worse prediction, but if we are smart and remember our sense of humanity, we could muddle through the next few decades with a certain grace.

2 Responses to The Future of Agriculture : Genetics and the Limits of Oil