The Republican Taliban Are in the Cat Bird Seat 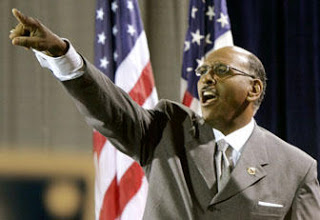 Charge!: Republican Chairman Michael Steele calls forth the forces of reaction.
‘The price of determined obstructionism will be much higher for the nation, but the Republicans clearly care only about their own political fate.’

Representative Peter Sessions of Texas, head of the National Republican Congressional Committee, bragged that Senate Republicans had learned insurgency tactics from the Taliban. Republican columnist Jonah Goldberg has already registered his opinion that “The stimulus bill has failed. Barack Obama has failed.” Maybe he thought that his colleagues had successfully gutted it, but he limited his explanation of the failure to saying Barack Obama lost his opportunity to reduce the partisan climate, which was not a good idea in the first place in Goldberg’s view.

No one was surprised when Rush Limbaugh, the Republican ayatollah and enforcer of orthodoxy, said “I hope he [Obama] fails.” Limbaugh has spent two decades making racially “insensitive” remarks, and race was doubtless one important factor in the spinmeister’s motivation. It is difficult to say how many other conservatives have serious problems with President Obama’s race.

No Honeymoons for Clinton and Obama

Republicans refused to grant Bill Clinton a honeymoon in 1993, and now they have done the same to Barack Obama. Blocking Clinton programs paid off big time, and voters in 1994 restored Republicans to control of the House after decades in the wilderness. It looks like the GOP is looking to repeat this feat and profit handsomely in 2010. Willing to sacrifice the interests of the nation, the Republicans have put themselves in the cat bird seat. Heads they win; tails we the people lose.

But this time, the price of determined obstructionism will be much higher for the nation, but the Republicans clearly care only about their own political fate. Recently, a ranking international trade official predicted that this deep depression will lead to political instability in some countries. One of British Prime Minister Brown’s chief economic advisors is saying the world could be facing the worst economic crisis in 100 years.

Even Keynesian economists supporting the stimulus plan say things are bound to get much worse and that there will not be great improvement in 2010. Through delays, talking down the stimulus, and gutting important provisions, the Republicans have guaranteed that things will get much worse. Few doubt that the GOP base will hold firm, and there is a pattern of voters supporting the opposition in off years. Add to that impatient people who will want to punish Obama and the Democrats for not working economic miracles in less than two years, and there is the formula for huge GOP gains in 2010.

The Spin War is about a very difficult paradigm shift

So far, with the help of the corporate media, Republicans have run circles around Democrats in the spin war. All they are required to do is criticize and offer vague bumper sticker slogans. Most, like Party chairman Michael Steele, subscribe to Herbert Hoover economics, and want government to do nothing. Some back the three trillion tax cut plan offered in the Senate. Others are unhappy but have nothing to offer. It seems clear that they have greatly driven down public support for the stimulus and have reconverted many to the old, failed economic paradigm of tax breaks for the rich, deregulation, and opposition to spending to help the least advantaged.

Democrats mistakenly thought that the election results and illusory polls showed that there had been a paradigm shift away from the old model and toward modern economics. They should have read Thomas Kuhn, whose work shows that these shifts come slowly. Economic pain will get worse, and that will stimulate some to question the old assumptions. But there are no simple slogans and one minute soundbites to use in helping people understand our situation and seeing the merit of Keynesian solutions. In his first press conference, President Obama offered many good explanations. However, we must find ways to simplify them still more.

How the Democrats reeducate the public on economic matters is a problem. It is so much easier to sell people on misinformation. Correcting this propaganda requires two and three step reasoning. Congressional Democrats must harp on how Republican economics brought us this looming depression and they must harp on the inconsistency of Republican arguments.

There are many who insist that only tax cuts — especially for the rich — will do the job. They note that the Kennedy and Reagan cuts had some positive impact. But they do not tell us that studies of those two events show that we got far less than a dollar’s simulative value out of each dollar of tax cuts. Simple, untargeted spending yields $1.75 in stimulus for each dollar spent. It seems that the Bush tax cut went to fuel the financial services and housing bubbles, and the 2008 cash hand-out had no effect whatever.

The fact is that the world economy is going over the cliff. Keynesians know that this package is far too small and has the wrong ration between tax cuts and stimulus spending. If this first stimulus package prevents the bottom from completely falling out, it will have been a great success. We also know that the stimulus package was badly weakened in the Senate — all to pick up three votes. The child tax credit was changed to make certain that the very poorest children would be left out in the cold. Assistance to the states was sharply cut, assuring that many in state and municipal jobs will lose their jobs and be unable to spend at old levels. Medical assistance for the unemployed was practically left out. For no sensible reason, people who now own homes will get $39 billion in assistance so they can try to flip their houses at a profit. It is hard to see how all this damage can be repaired in conference committee as the votes of so-called centrists are needed to get it through the Senate.

After the conference bill passes, President Obama needs to lower expectations by pointing out all the damage that was done to the program. It will no longer produce four million jobs.

Let The Repugs Bring Buckets to the Senate

With the certainty of more obstruction down the road, Democrats have to either abandon large parts of their program or face up to doing something about the filibuster. It is unlikely that the rules can be changed, so they are left with letting the Republicans bring their buckets into the Senate chamber and start talking around the clock. The trick will be finding the right issue. It is probably health care, provided the Democrats submit a simple and clean bill that will not open the door for all sorts of outrageous claims about not being able to pick your own doctor, etc.

If the Democrats cannot facilitate a paradigm shift, we could see gleeful NeoCons begin implementing Friedman’s Shock Doctrine in 2013, complete with a shredded safety net, all sorts of privatization, stripped away labor and environmental regulations, a return to casino capitalism, and a foreign policy designed to extend the power of Wall Street while alienating tens of millions abroad. Face it; if the American economy cannot generate great income for American investment capitalists, the Armed forces must do it abroad.

If things are bad enough, ordinary people might accept the kind of security state General Augusto Pinochet introduced to protect the Chicago School’s economic program in Chile. George W. Bush greatly improved upon the foundations laid by his father and Oliver North, and Barack Obama will not be able to dismantle all of that. Already, his administration has refused to back off Bush’s use of the state secret privilege.