Thomas McKelvey Cleaver : We Reap What We Sow in Middle East 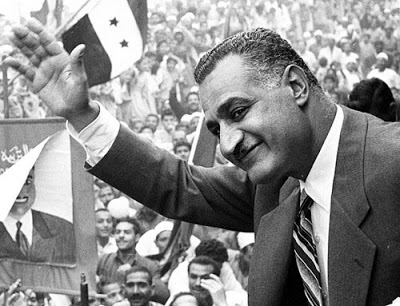 Gamal Abdel Nasser. Photo from ziomania.
Nasser, Egypt, and the Middle East:
We reap what we sow

Perhaps now might be a good time to realize that what is going on in Egypt is a whirlwind that we set in motion 60 years ago.

Back in 1951, there were two Middle Eastern leaders who wanted to modernize their countries. They wanted them to be strong enough to withstand the West, from whose colonialism they had only recently escaped. They wanted to control their own resources, establish popular majority democracies, and bring the middle east out of 500 years of subservience to everyone else.

Their names were Mohammed Mossadegh and Gamal Abdel Nasser.

Mossadegh wanted to use his country’s oil wealth to modernize it. Nasser wanted to use the revenues from the Suez Canal to modernize his country. They both ran into the declining imperialism of Britain — and America, whose primary desire after winning the Second World War was to grab Britain’s imperial scepter.

Both men politically were the Middle Eastern equivalent of members of the British Labour Party. But neither was willing to sign on to the American war against Communism, and so in 1952, both found themselves on John Foster Dulles’ shit list (he was the originator of “you are either with us or against us”).

By 1953, Mossadegh had been overthrown by the CIA and the Shah was returned with his secret police and a license to destroy Mossadegh’s political movement.

In 1954, Nasser asked for aid in building the Aswan High Dam, which would tame the Nile and allow the peasantry of Egypt a chance at living lives that were an improvement over what they had led under the Pharoahs (a life unchanged from then through today). Dulles said no, unless Nasser would join the Cold War. The Soviet Union offered aid, and from that time until 1975. Egypt was on America’s enemies list.

In both cases, had the United States stood up for what we allegedly believe in (even back when we were still a constitutional republic and not a world empire), the forces of secular modernization would have won the day in the Middle East. Instead, the only form of political protest left to the average person there was religion.

We saw the culmination of 25 years of support for the Shah in the Iranian Revolution of 1978. No wonder they think of us as the enemy.

We are seeing the culmination of 25 years of buying off the leadership of Egypt following the death of Nasser, in the streets of Cairo. I heard television commentators talking about the “$1.5 billion in aid” we give Egypt. It isn’t aid! It’s bribery for the ruling class and Imperial Mercantilism!

Eighty percent of that money goes to the Egyptian military. What do they do with it? They send it here to finance the Military-Industrial-Congressional complex, with orders for American military hardware. After the Pharoah and his supporters take their cut. If even half that money went to actual “aid,” to actually helping the Egyptian people to move out of the 7th Century BC and into even the 18th Century AD, we would be applauded!

It is beautiful to watch the news from Cairo as the Egyptians lose their fear of the black-clad scum and the Empire’s latest satrap goes down. As a couple of commentators on the Ed Show on MSNBC said (and as my Lithuanian partner who witnessed the events of 1989-90 said), this is like the overthrow of the Soviet empire in Eastern Europe 22 years ago.

Personally, I hope this revolution sweeps the Middle East, and that the Legions of the Imperial American Wehrmacht are swept away in the flood. Five percent of the planet’s population uses 25% of the planet’s resources. Cutting us off from our ill-gotten gains may be the only way left for real change to happen here, the kind we see now in Tunisia and Egypt.

4 Responses to Thomas McKelvey Cleaver : We Reap What We Sow in Middle East