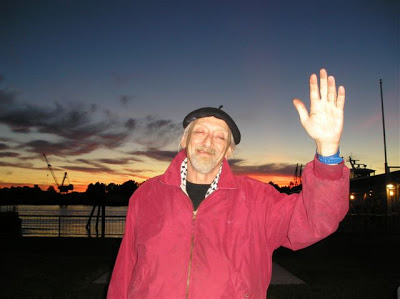 
See “Los Muertos,” a poem by John Ross, Below.

Yesterday I received an email with the following message: “John Ross passed peacefully in the arms of his good friends Arminda and Kevin in Tzipijo, near Lake Patzcuaro, Michoacan, after a two-year lucha against liver cancer.” The message was sent from John’s email address and included the above photo.

John Ross, who styled himself an “investigative poet,” was a long-time contributor to and friend of The Rag Blog. He was a singular talent whose work was always enlightening and entertaining, every post a revelation. No one ever wrote about Mexico like John Ross did… or ever will again.

Ross, whose roots were in the old left politics of New York City and the beat poetry scene of San Francisco, visited Austin last March promoting his latest book, El Monstruo: Dread and Redemption in Mexico City, and reading his poetry at MonkeyWrench and Resistencia bookstores.

Our mutual friend Mike Davis, himself a noted author and educator, wrote about John and El Monstruo: “From a window of the aging Hotel Isabel, where he has lived for almost a quarter of a century, John Ross sings a lusty corrido about a great, betrayed city and its extraordinary procession of rulers, lovers and magicians.”

Indeed, everything John Ross ever wrote was a “lusty corrido,” a vivid grito of protest and celebration.

The Rag Blog last heard from John late last year when he informed us he would be suspending his writing indefinitely due to the rigors of the latest round of chemotherapy to treat his advancing cancer of the liver, which had been in remission but had returned with a vengeance.

[Thorne Dreyer, a pioneering ’60s underground journalist, is a director of the New Journalism Project, Inc., editor of The Rag Blog, and host of Rag Radio.]

John Ross dies:
Opposing every war was his obsession

A wake is being held on the shores of Lake Patzcuaro. He will be cremated in Urapan and his ashes scattered in Mexico and in several cities in the U.S., according to his wishes.

Ross, whose last book is entitled El Monstruo: Dread and Redemption in Mexico City, arrived at Casa Santiago, on the shores of the lake, on Dec. 31 in a taxi, reports Kevin Quigley, who with his wife is owner of the guest house. Both were compadres of the New Yorker.

Two days earlier, friends of the journalist had retrieved his archives from the room he occupied in the hotel Isabel in Mexico City, where he had lived since the week following the earthquake of 1985. His files are to be temporarily stored at the Cemanahuac Educational Community in Cuernavaca.

John Ross was a man of the Left and one of his great obsessions was the struggle against wars of every type. His great labor as an independent journalist and correspondent was to participate in and cover the political and social events that happened here, to make them known in the United States. “He never quit telling the gringos what was happening in Mexico” … 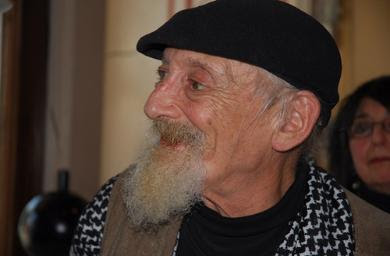 After they had waited on line

to vote for the candidate of their choice,

The Dead were finally informed

that they were no longer inscribed

upon the precinct lists of the Republic.

But we have only come to exercise

our rights as responsible citizens

for it seemed to them that the President

in the spirit of national unity

had called upon all the people

to cast their ballots

as is the democratic norm.

who was still quite alive

the exclusion of the calacas

with platitudes about Morality.

But your votes are clearly illegal

they can’t be counted in this election.

You have a point The Dead replied,

maybe they won’t be counted now

but surely you will count them later.

© John Ross
When John Ross was 18, he was a young member of the Beat Generation, reading his poetry in Greenwich Village bars with the great bass player Charles Mingus. — Beatitude Poetry