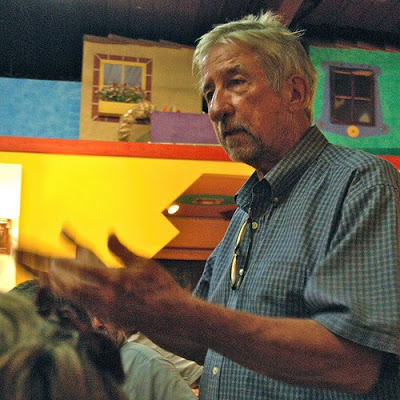 Tom Hayden speaks with members of the Austin activist community, Friday, August 24, 2012, at a South Austin Mexican restaurant. The next day he spoke before a larger group at the 5604 Manor Community Center. Photo by Carlos Lowry / The Rag Blog.
Building populist communities

We must focus on fostering ‘communities of meaning’ where alternative identities, consciousness-raising projects, and even ways of life are built…

No matter the outcome of the November election, but particularly should the federal government become crippled by Republican judges and House members, defensive Democrats, and deadheaded bureaucrats, we need to be prepared to dig our way out and press onward.

To my way of thinking, we in the movements must focus on fostering what I call “communities of meaning” — those where alternative identities, consciousness-raising projects, and even ways of life are built during the long periods between the rise and end of social movements.

Though sometimes there are surprising breakthroughs, more generally people must live their lives, raise their children and make their livings during the long spells before real victories. Richard Flacks’ great book, Making History: The American Left and the American Mind, is alone worth reading for its description of how the Left became a community of learning, self-help, and empowerment for immigrant communities a century ago.

But there is more than a cultural assertion. There is also the political. As Louis Brandeis wrote, it is about states (and cities) being “laboratories of reform.”

We are not going to radicalize Texas anytime soon, nor the diehard states of the Old Confederacy and Wild West. San Antonio, however, is promising; so, too, is Austin as I was recently reminded during my visit where I met with Javier Sicilia and his Caravan for Peace against the War on Drugs and with peace activists at the 5604 Manor Community Center in an event organized by The Rag Blog. Communities lead to cities, which lead to states, and in time you have half a nation and more.

Looking to communities, even when it comes to foreign wars, our urban mayors have been leading. Los Angeles’ Antonio Villaraigosa, chair of the U.S. Conference of Mayors, pushed through a resolution demanding an end to the wars in Iraq and Afghanistan and that their funding be transferred to our cities and domestic priorities. He followed up by lobbying Congress.

If the Congress does not preempt the states from acting, this is the ground whereon a battle for a Canadian-styled healthcare system is likely to be fought. It is where alternative energy, clean air, and fuel-efficiency programs already have and will continue to blossom from California to New York. It is where immigrant rights will be mainstreamed, and it is where same-sex marriage and reproductive rights are going to be protected and flourish.

And, if progressives get their act together, it is the ground on which a better, more accessible and affordable education system will take root. It is where the next generation of judges will start to address the role of money in politics, and where voting rights will either be protected or shredded.

The Arizonas will be the new Mississippis. If the federal government is on our side — like Obama’s Justice Department is today against Arizona — so much the better. If not, the progressive majority will have to lead, and defend against the white reactionaries, until the federal government eventually follows.

It is important that Obama wins, that Elizabeth Warren wins, and that the Congressional Progressive Caucus grows in size. But let us not federalize our minds altogether. Local control and states’ rights should not and do not belong to the Rick Perrys alone. Progressive populist movements can be the cradle of a new economy, politics, and culture.