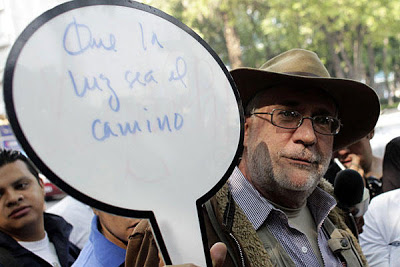 Mexican poet Javier Sicilia and members of his Caravan for Peace protest the drug war earlier this summer in Cuernavaca, Mexico. Photo by Henry Romero / Reuters.
Can the Caravan for Peace
end the War on Drugs?

“The powers that be were trying to tell us that all those who were dying were just criminals, just cockroaches. We had to change the mindset, and put names to the victims for a change.” — Mexican Poet Javier Sicilia

The Rag Blog and Rag Radio will present writer and progressive activist Tom Hayden, Saturday, August 25, 2012, at 5 p.m., at the 5604 Manor Community Center in Austin. Tom — who was a founder of SDS and primary author of the Port Huron Statement — and later a California State Senator — will speak on “The Drug War, the Peace Movement, and the Legacy of Port Huron.” There will be a suggested $5 donation to the New Journalism Project, publisher of The Rag Blog.

A new peace movement to end the U.S.-sponsored drug war begins with buses rolling and feet marching from the Tijuana–San Diego border on August 12 through 25 U.S. cities to Washington, DC, in September.

Named the Caravan for Peace, the trek is intended to put human faces and names on the estimated 60,000 dead, 10,000 disappeared, and 160,000 displaced people in Mexico since 2006, when the U.S. Drug Enforcement Agency, Pentagon, and the CIA supported the escalation of the Mexican armed forces.

[The Caravan for Peace will be in Austin, Saturday, August 25, with a public rally on the south steps of the State Capitol from 12 noon-3 p.m. Other Texas stops include El Paso, Laredo, Harlingen, Brownsville, McAllen, San Antonio (August 24), and Houston (August 26).]

The caravan, which has staged mass marches across Mexico since 2011, is led by well-known Catholic poet Javier Sicilia, 56, whose son Juan Francisco, then 24, was killed in crossfire in Cuernavaca in March 2011. After his son’s death, Sicilia, vowing not to write poetry any longer, formed a Movement for Peace with Justice and Dignity (MPJD) and penned an anguished grito, or cry, titled “Estamos Hasta La Madre!” The English equivalent might be “Fed Up!,” but the Spanish slang also means that the authorities “insulted our mother protector, they’ve committed a sacrilege,” Sicilia says.

About 70 Mexican activists, many of whom are relatives of victims, and about 30 Americans will accompany Sicilia on the caravan along the U.S.-Mexico border, north from New Orleans through Mississippi and Alabama, to Chicago, Cleveland, New York City, Baltimore and Washington, DC. The U.S.-based Global Exchange is charged with coordination and logistics.

More than 100 U.S. immigrant rights and peace groups are actively involved, including the Drug Policy Alliance, the NAACP, the Washington Office on Latin America, the Center for International Policy’s Americas Program, the Law Enforcement Against Prohibition, the National Latino Congreso, Presente.org and Veterans for Peace. Fifty grassroots groups are involved from California alone.

The caravan may force a response from President Obama, who at the Summit of the Americans this past April stated “it is entirely legitimate to have a conversation about whether the laws in place are ones that are doing more harm than good in certain places.”

At this point, the caravan has not reached a decision on whether to seek a meeting with the White House, according to caravan spokesman Daniel Robelo of the Drug Policy Alliance. But it will hold briefings on Capitol Hill and intends to reach out to administration officials, Robelo says.

After the caravan massed 100,000 in Mexico City’s Zócalo (main plaza) last spring, Sicilia took part in direct dialogue with Mexican president Felipe Calderón last June in historic Chapúltepec Castle. On a large table before the president lay photos of Mexicans slain in the conflict, often depicting them as smiling, hopeful human beings before the horror that claimed their lives.

Sicilia said, “The powers that be were trying to tell us that all those who were dying were just criminals, just cockroaches. We had to change the mindset, and put names to the victims for a change.”

The response to Sicilia’s call was spontaneous and widespread. Overnight he became a revered figure in Mexico. Soon he was one of the protesters featured in Time magazine’s 2011 “Person of the Year” issue.

Assuming favorable local and national coverage as the caravan crosses the United States, Sicilia’s voice will soon be heard by millions of Americans.

And an unusual voice it is. Authentic: the voice of a grieving father. Nonpolitical: “I had never thought of starting a movement or being a spokesman for anything.” Religious: he is a theologian trained in liberation theology, and believes “the life of the soul can be powerful too.”

Sicilia’s movement has not pleased everyone on the Mexican left. Though a man of the left, Sicilia did not support Andrés Manuel López Obrador, the presidential candidate of the Partido de la Revolución Democrática (PRD). In the view of some, his strategy of dialogue only made Calderón and conservative political parties seem more reasonable.

In a Time interview, Sicilia denounced left-wing groups in Juárez for trying to “highjack the movement” by insisting that Calderón withdraw all Mexican troops from the streets. Sicilia’s intuition was that immediate and total withdrawal of the army was an unrealistic demand that would weaken public support. “It threatened to drain the force of the movement,” he said. “It showed me that a protest can’t be overly ideological if it’s going to be successful.”

An eyewitness journalist I spoke to, however, said the Juárez dispute also concerned the centralizing of too much decision-making power in Sicilia alone. The journalist acknowledged that many differences exist about the role, if any, of troops on the streets.

Perhaps the main achievement of Sicilia’s campaign so far is a change in narrative about the drug war taking place across Mexico. For years the central narrative has been about escalating prohibition and repression through a “mano dura” (“strong hand”) policy by the state and security forces. Victims’ voices have been enlisted to promote revenge. Questioners were marginalized as soft on crime and drugs.

While many are still enraged about traffickers and assassins, the rising narrative is about the failure of the drug war itself — including Mexican institutions like corrupt courts, law enforcement, and elected bodies — and a thoroughgoing “cluelessness” that Sicilia sees among Mexico’s governing elites.

Elites in the U.S. also will be threatened by parts of the platform the MPJD is carrying north. The document was cobbled together over a mid-June weekend with input from the Center for International Policy’s Americas Program, the Drug Policy Alliance, Washington Office Online America and Witness for Peace, among others.

The platform attempts to re-balance the drug policy debate from the two poles of Prohibition and Legalization towards a dialogue about alternative policies to militarization. It calls for:

The DPA’s Daniel Robelo says the main purpose of the caravan is to “make Mexico’s national emergency tangible in the U.S.” and create a binational platform to affect public opinion.

Laura Carlsen, of the Americas Program in Mexico City, who worked on the platform’s security issues, says that the caravan

has this very sort of moral purpose more than political right now. It’s outrageous that our governments continue with a strategy that is demonstrably ineffective and costly in terms of death and destruction of families. By hearing the stories of Mexican victims alongside families of U.S. youth incarcerated for simple possession and lives lost to the violence and corruption of the illegal drug trade, citizens can get a real picture of how deeply wrong prohibition and the drug war are and begin to look at realistic and humane alternatives.

If the caravan’s call to “end the violence” diminishes public support for the militarized approach, it could force an open dialogue about alternatives like drug legalization, until very recently considered a fatal third rail.

Sicilia and the caravan have been careful not to call explicitly for legalization, because their starting point is the suffering caused by the failed drug war. In addition, they acknowledge that the alternatives are complex. They have an informal consensus, though not a demand, on somehow regulating marijuana more safely, and promoting research and analysis on approaches other drugs like cocaine and methamphetamine — humanizing, so to speak, instead of militarizing, the problem.

The caravan arrives at a turning point in the hemispheric drug policy debate. Obama’s endorsement of a new “conversation” was forced by unprecedented criticism of U.S. drug war policies by the presidents of Guatemala, Colombia, Costa Rica, Argentina, Brazil, and Ecuador at a regional summit in February. Belize has followed suit, and Uruguay’s president José Mujica on June 20 proposed that his country become the first to legalize marijuana under state management.

But the regional upheaval against the drug war paradigm is real, and Obama knows it. The U.S. government’s increasing isolation from Latin America will require more than “a conversation,” but it could usefully begin with one. The drug war status quo is collapsing. More than ever, voices of protest are backed by the power of hemispheric leaders too numerous to ignore.

[Tom Hayden is a former California state senator and leader of Sixties peace, justice, and environmental movements. He currently teaches at Pitzer College in Los Angeles. His latest book is The Long Sixties. This article was first published at The Nation. Read more of Tom Hayden’s writing on The Rag Blog.]