Tom Hayden : Obama is ‘Kicking the Can’ on Afghanistan 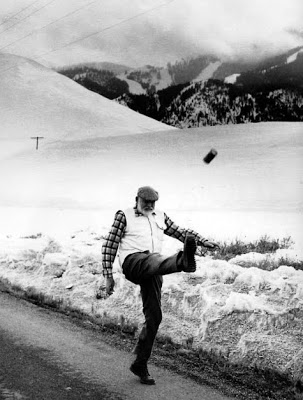 Kicking the can. Image from Oskar Rough.
Obama’s Afghanistan policy:
Playing to the imaginary center

Like President Johnson before him, President Obama is squandering any hope for his progressive domestic agenda by this tragic escalation of the war.

The president’s proposed Afghanistan policy is not a product of intelligent rethinking so much as it is a predictable Obama preference for an imaginary centrism.

On the one hand, he is sending 30,000 more American troops, who have been dying at a current rate of more than 500 per year.

On the other hand, he is attempting to placate growing anti-war sentiment by pledging to limit the duration of the war.

As with all compromises, this one will satisfy only the few. It is what President Bill Clinton called kicking the can down the street.

The antiwar movement will continue to support Rep. Barbara Lee’s bill cutting off funds for the troop escalation [see below]and Rep. Jim McGovern’s resolution calling for the administration to offer an exit strategy.

These costs in human lives and tax dollars are simply unsustainable.

As I committed myself during Vietnam, I am committing myself to do everything possible to turn our nation’s priorities around and make President Obama’s domestic agenda a possibility. Just as President Johnson could not pay for guns and butter, President Obama cannot possibly pay for Iraq, Afghanistan, Pakistan and the Pentagon’s projection of a “long war” of fifty years duration.

I am afraid to say that President Obama is even risking his presidency by this decision. From this point forward, he will lack the support of the rank and file Democratic majority and become dependent on the very Republicans whose highest priority is to defeat him in 2012. 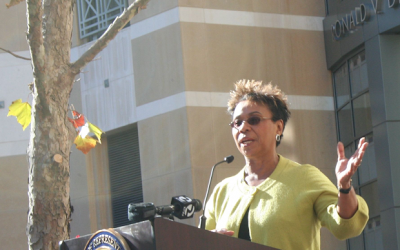 As the deadliest year of the U.S. war in Afghanistan draws to a close, Oakland’s congressional representative Barbara Lee today stepped up her calls to end U.S. involvement in the conflict.

“I stand here today to put this stage of American history — a stage characterized by open-ended war — to a close,” Lee told a crowd of more than 200 people attending a noon rally at the Ronald V. Dellums Federal Building in downtown Oakland.

So far this year, 297 American service personnel have died in Afghanistan, almost twice as many as in any other year of the war. Taliban forces have reestablished strongholds in southern Afghanistan, and deaths among NATO soldiers and Afghan civilians have also increased over figures from recent years.

After scaling down its presence in Iraq, the U.S. military has intensified its efforts against Taliban and al-Qaeda fighters in Afghanistan and, since 2008, in neighboring Pakistan. U.S. ground commander General Stanley McChrystal called in late September for more U.S. troops in Afghanistan, but President Barack Obama has not committed more troops as he awaits a full review of U.S. policy in Afghanistan.

“President Obama is right to take his time,” Lee said. “He shouldn’t be rushed into making a decision. He inherited a quagmire from George W. Bush. We know there’s no military solution in Afghanistan, and a long-term presence there is not in our interest.”

Lee, the only member of Congress to vote against the 2001 authorization of war in Afghanistan, introduced House Resolution 3699 in October, which would prevent funding for any additional troop deployments to Afghanistan. Her bill, one of several recent House initiatives to halt expansion of U.S. war efforts in Afghanistan, now has 23 co-sponsors, including former presidential candidate Dennis Kucinich (D-Ohio) and Lynn Woolsey (D-Petaluma). At the rally today, Lee said she’s not alone in opposing the war and that her votes on Capitol Hill reflect her constituents’ political views.

“My district—California’s 9th Congressional district — remains the most progressive, diverse and committed to dissent in the country,” Lee said to a round of applause. “Where we lead, others go.”

“With Barbara Lee’s resolution [HR 3699], there’s more than ideas on the table for leaving Afghanistan, there are bills on the floor of Congress. ” Hayden said. “We hope for the recovery and growing strength of the peace movement with Barbara’s leadership.”

Several speakers drew parallels between the Vietnam War and the current conflict in Afghanistan and argued that military spending in Iraq and Afghanistan has prevented the U.S. government from addressing domestic political needs.

“Our military demands ever more troops,” Cox said. “Meanwhile, our economy is in the toilet, health care costs are out of control, and we can’t afford to educate our children. But somehow, there’s always money for war.”

Lee argued that the United States needs to employ “smart power” to improve the situation in Afghanistan, citing her hopes for increased diplomacy and economic development in the region. She drew on historical parallels in her argument against the U.S. military presence in the country.

“Afghanistan is known historically as the graveyard of empires for a reason. It’s good to ask why we should follow the same course as the British and the Soviets,” she said. “We need an exit strategy to bring troops and contractors home to ensure the economic security of all Americans.”

1 Response to Tom Hayden : Obama is ‘Kicking the Can’ on Afghanistan