Tom Hayden : Will Iraq ‘Invite’ Us to Stay? 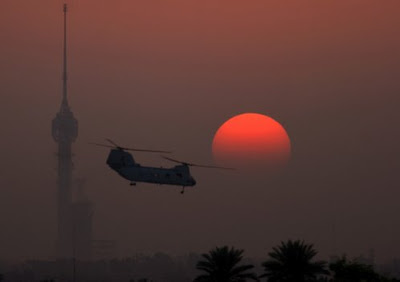 Image from Progressive America Rising.
U.S. combat ends in Iraq
But will Iraq ‘invite’ us to stay?

See ‘The myth that the combat troops are leaving Iraq’ by Col. Andrew Berdy, Below.

While the Obama administration struggles to keep its pledge to end the Iraq war, a behind-the-scenes plan is developing in which the Baghdad regime “invites” the American military to stay.

Managing the withdrawal of combat troops was a significant achievement for Obama. But while media attention focused this week on the last American combat brigade rolling out of Iraq, US diplomat Ryan Crocker was predicting that if the Iraqis “come to us later on this year requesting that we jointly relook at the post-2011 period, it is going to be in our strategic interest to be responsive.” [NYT, Aug. 19]

That means troops and bases, keeping a U.S. strategic outpost in the Middle East. Otherwise, according to some Pentagon sources, the Iraq war will have been in vain.

To prevent backsliding on the agreement to withdraw all troops and bases by the end of 2011, peace advocates and Congress will have to revisit and reinforce those agreements using hearings and budgetary powers.

To review the history: in late 2008, a secret negotiation resulted in what the Iraqis called “the withdrawal agreement” and the Americans the “status of forces agreement.” The bilateral pact was never debated or approved by the U.S. Congress. By its adoption, the Iraqis could claim a victory for sovereignty while the U.S. could declare a diplomatic end to an unpopular war.

In reality, the Iraq war never ended. U.S. casualties plummeted because fewer Iraqis wanted to shoot Americans who were leaving. Iraqi casualties declined from the feverish high of 2006-7, but continue to be several hundred per month.

Al Qaeda of Mesopotamia, which did not exist when the war began, has survived. The forces of Moktada al-Sadr, who waged two uprisings against the U.S., are a powerful factor in Iraqi politics and on the ground. The Kurdish crisis is unsolved. Overall, Iran has prevailed strategically and politically.

And the Baghdad regime originally installed by the Americans seems hopeless deadlocked, inefficient, and on the edge of imploding. The only Western winners are the oil companies headed by British Petroleum, now contracting for the Basra oil fields.

The immediate future is uncertain. U.S. soldiers currently being sent to Iraq are told their mission is “to shut it down.” But the real story is being hidden by the Obama administration’s insistence that its promise to end the war is being kept. The notion of a continued military presence, according to the Times, “has been all but banished from public discussion.” According to one official, “the administration does not want to touch this question right now.”

A war that started with dreams of bringing democracy to the Middle East is ending by keeping plans for more troops hidden from American voters during an election year. Sound familiar?

[Tom Hayden is a former California state senator and leader of Sixties peace, justice, and environmental movements. He currently teaches at Pitzer College in Los Angeles. His books include The Port Huron Statement, Street Wars and The Zapatista Reader. He is a contributor to Progressive America Rising, where this article also appears.]

The myth that the combat
Troops are leaving Iraq

Can you explain to me how, or why, the myth of “all combat troops out of Iraq” is allowed to be perpetuated by the press, much less our senior military leadership? Yes, the mission has changed. But units like my son’s Stryker Brigade (not the one that just left!) are, and always will be, combat infantry units.

This is fiction pure and simple. I just don’t get how the nation has swallowed this and why members of the media are not reporting facts the way they are rather than the political PR message the Administration wants portrayed. Does anyone not think that the likelihood of continued combat operations is a reality? When casualties are taken by these “non-combat forces” will those casualties be characterized as “non-combat” as well?

Does the public not understand that the secondary mission of our remaining forces is to be prepared to conduct combat operations either to defend themselves or to support Iraqi forces if requested? And when these train and assist “non-combat” units have to engage in, dare I say, combat operations, what will the Administration say then?

I can tell you, as a former brigade commander responsible for securing and helping to rebuild Port-au-Prince, Haiti, while we went in prepared for battle, and quickly transitioned to peacekeeping/nation building, there was never a moment that my infantry brigade was not prepared to conduct combat operations (which did occur late in the deployment) and there was never a moment when we were anything but a combat force.

I suspect if you ask those troopers on the ground now they would agree with me and take incredible umbrage with what is being trumpeted on TV and in the press.

Thanks to Carl Davidson and Steve Russell / The Rag Blog

9 Responses to Tom Hayden : Will Iraq ‘Invite’ Us to Stay?