Underground in H-Town : A Rich History of Alternative Media 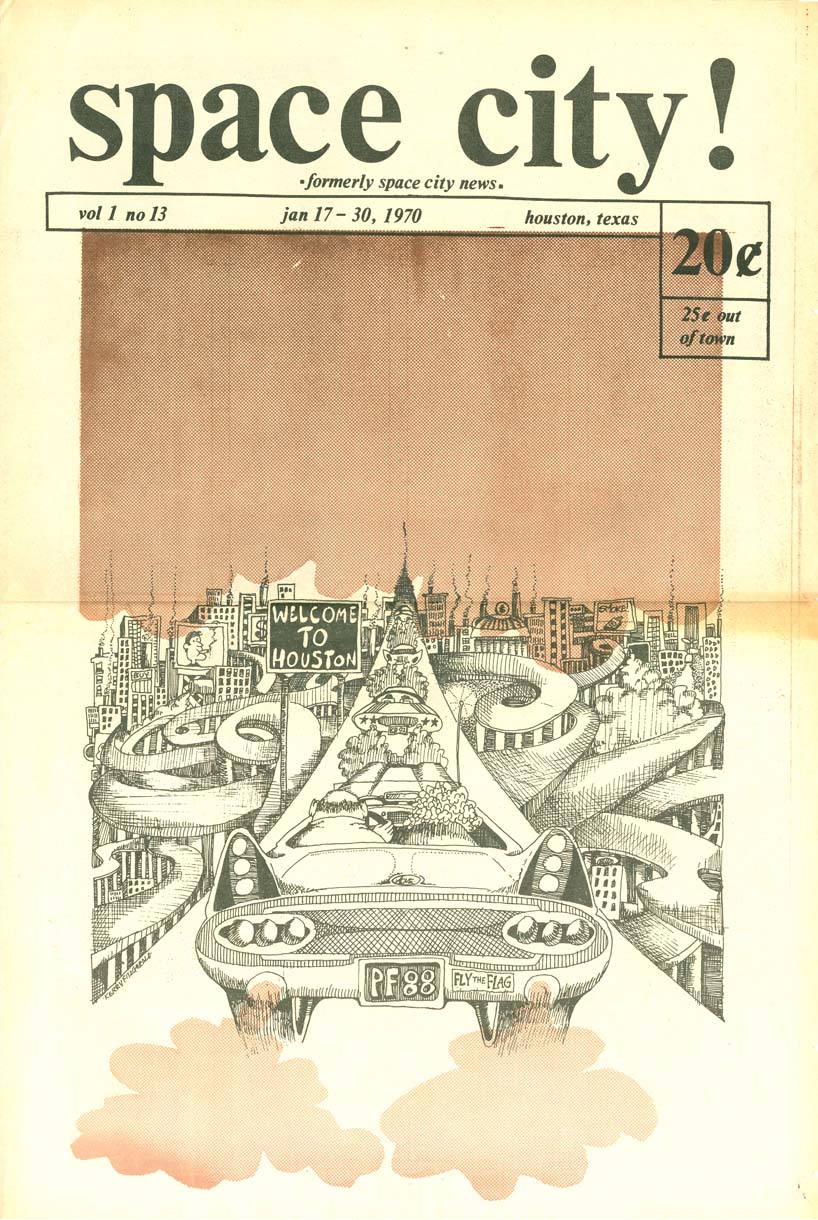 HOUSTON — Houston has a problem, a memory problem. This is particularly true when it comes to the history of the city’s underground and alternative culture. Underground in H-Town, an exhibit at Houston’s Museum of Printing History, attempts to address this problem.

The exhibit, curated by the Museum of Printing History’s Amanda Stevenson and Jo Collier of the Houston Public Library’s Houston Metropolitan Research Center, explores the history of minority and alternative publications in Houston.

The Museum of Printing History, founded in 1979, is a lively Houston museum whose mission, in part, is “to promote, preserve, and share the knowledge of printed communication and art…” with, in the words of Texas Highways, a “collection of objects and artifacts devoted to the history, science, and art of printing.”

The show includes sections on Jewish, Asian, Latino, African American, LGBTQ, and feminist media as well as a display which showcases Space City!, a radical newspaper of the late 60s and early 70s (and it’s spin-offs) and another which focuses on Public News, a popular alternative paper of the 80s and 90s, and a centerpiece comparing alternative and mainstream coverage rounds out the exhibit.

Anyone who thinks there is no alternative media in Houston may be surprised to learn that over 40 titles are represented and these are only scratching the surface of what is actually a rich and diverse history.

The longest running title included in the exhibit is the Jewish Herald Voice which was founded in 1908 and is still published today. The oldest issue displayed in the exhibit is a February 18, 1939, copy of the Houston Defender which is also believed to be the oldest physical copy in existence of the African-American newspaper founded nine years earlier.

OutSmart (founded in 1994) is the youngest title represented while the most recent item in the exhibit is a 1997 issue of Public News.

One newspaper that is not from Houston is also included. The May 14, 1978, issue of Corpus Christi-based Tejas News finds a place in the exhibit for its extensive coverage of the Moody Park Riots of May 5 that year and is paired with other papers, including La Prensa which covered this story.

The ’60s and ’70s are the emphasis of the exhibit and a large part of this focus is Space City! (originally called Space City News). The collective-run paper was edited by a group including Thorne Dreyer, who previously was a founder of The Rag in Austin, which also had a substantial Houston presence. (Dreyer continues to publish The Rag Blog, an online reincarnation of The Rag.) Several issues are included as well as some internal pages including an editorial that recounts the paper’s first year, including the name change and the bombing of their offices by the Ku Klux Klan.

Mockingbird, which split off from Space City!, is also included. An editorial from the first issue (April 1972) discusses what they perceived as failures in the collective process and their reasons for forming a separate paper. Ironically, there was also a split from Mockingbird, leading to the creation of a publication called Abraxas, which is also included in the exhibit.

An audio presentation of an oral history interview with Thorne Dreyer, which can be heard in the adjacent theater, compliments this section. The interview was originally recorded in 1976 by Dr. Louis Marchiafava of the Houston Metropolitan Research Center.

The opening reception was attended by a large contingent from Space City! and other veterans of the ’60s-’70’s Houston counterculture. 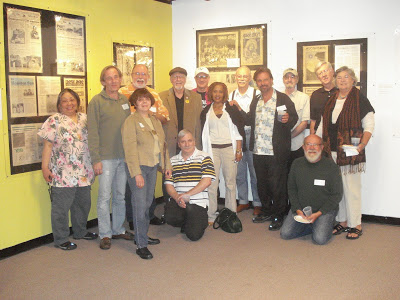 The section on gay and LGBTQ media presents pictures of the protests over a Houston visit by singer Anita Bryant who led the campaign against the gay rights ordinance in Florida and became a national symbol of anti-gay hysteria. Publications in this section date back to the mid ’60s.

Albatross, the oldest known gay publication in Houston, began as a newsletter in 1965. But if some of the LGBTQ publications of yesterday look unfamiliar, some of the faces might look very familar including activist and radio personality Ray Hill on the cover of Montrose Voice, and Annise Parker (now mayor of Houston) on the cover of The Wand from 1990.

Several issues of Houston Breakthrough, a free feminist publication edited by Janice Blue and Gabrielle Cosgriff (now on the editorial board of the Houston Chronicle) which ran from 1976 to 1981, are also included in the exhibit. Unfortunately they are in what seems to be a catch-all section with the Houston Peace News and some labor publications. This may be a question of space or it may be that few examples of local feminist and labor publications have been archived.

Public News, the alternative news weekly of the ’80s and ’90s which began as a two-sided photocopy (not displayed), closes out the exhibit. Not only are several issues presented, but the sign from the paper’s last offices on West Alabama is also included. A 1997 issue looks back at Houston in the ’60s. 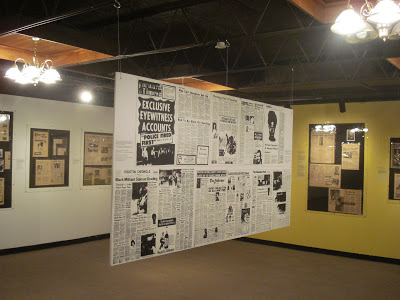 The centerpiece of the exhibition features coverage of the shooting of black activist Carl Hampton, as it was handled by mainstream and alternative media outlets.

The highlight of the exhibition is the centerpiece which illustrates the need for alternative media to provide a counterpoint to the mainstream press. It shows how the same story was covered by alternative and mainstream media outlets. The display shows how the murder of Carl Hampton 40 years ago this July, was covered by the Houston Chronicle, The Houston Post, Space City!, the Voice of Hope, and the Forward Times. Hampton was a charismatic black activist who was shot by Houston police.

The most disappointing part of the exhibit, and this may be just a question of space, is that it stops with the ’90s rather than presenting the history of alternative press as a phenomenon that continues today, and is also very thin on any examples after 1980.

Fortunately, there is some sense of a continuum established with the show’s poster which is illustrated by Shelby Hohl of Free Press Houston, one of Houston’s most popular alternative papers established in the past decade.

Also, several newsracks at the end of the exhibit offer a look at current publications. To be sure, some of the publications in these racks are not actually alternative. One of those is the Houston Press, the corporate owned weekly that bought Public News, a purchase believed by many as designed to suppress it, is represented here. 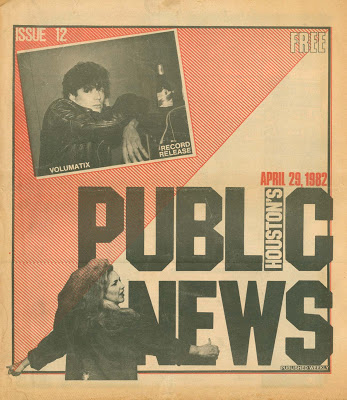 Underground in H-Town runs through July 24 at the Museum of Printing History, 1324 W. Clay.

In conjunction with the exhibit, the Museum is presenting a Roundtable Discussion on Alternative Media in Houston on Thursday, May 20, from 6:30-8:30 p.m. The panel will be moderated by Michael Berryhill, a professor of journalism at the University of Houston and award-winning investigative journalist. Panelists include Gabrielle Cosgriff, Tom Curtis, and Space City!‘s Dreyer, veterans of the alternative and mainstream media. (See details below.)

[shane Patrick boyle is the founder of Zine Fest Houston. Last year he had the privilege of working with Jo Collier to bring Thorne Dreyer and Sherwood Bishop to the Zine Fest for a Space City! 40-year reunion. The title “Underground in H-Town” came from a zine he was working on during that time which has not been released.] 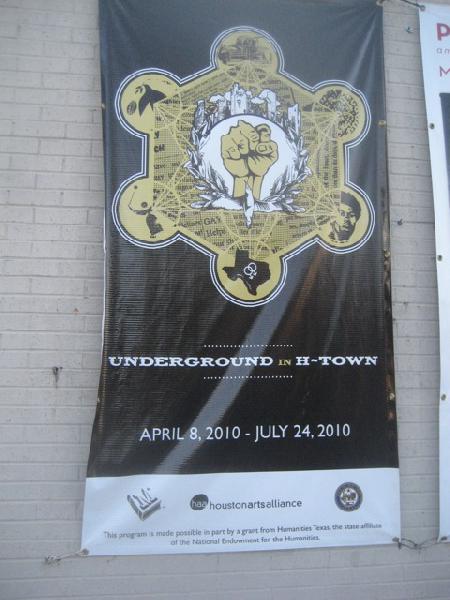 The Museum of Printing History is pleased to host a Roundtable Discussion on Alternative Media in Houston. The panel will be moderated by Michael Berryhill, a professor of journalism at the University of Houston and award-winning investigative journalist. Panelists include Gabrielle Cosgriff, Tom Curtis, and Thorne Dreyer, three freelance journalists with an intimate knowledge of print media in Houston from the 1970s to the present, including the alternative and mainstream press. Topics that will be explored include the history of alternative media in Houston, as well as current and future trends.

This event is held in conjunction with Underground in H-Town, an exhibition that highlights the importance of minority and alternative publications in the construct of local history. Organized in partnership with the Houston Metropolitan Research Center, Underground in H-Town presents original documents and images from community papers and the alternative press from the second half of the twentieth century, with a special focus on the 1960s, 1970s, and 1980s. Publications represent the many diverse communities of Houston. Papers presented in the exhibition include historic issues of Forward Times, Voice of Hope, Space City!, The Jewish Herald Voice, El Papel Chicano, El Sol De Houston, Houston Breakthrough, among others.

Gabrielle Cosgriff was the editor for Houston Breakthrough, a free monthly feminist publication that was recognized locally and nationally in its 5-year existence, 1976 through 1981. Cosgriff moved on to editorial work with local Houston magazines and People Magazine. She currently serves on the editorial board of the Houston Chronicle.

Tom Curtis is an award-winning investigative reporter, who has written since the 1970s for, among many others, the Houston Chronicle, Space City!, Fort Worth Press, The New York Times, the Washington Post, Dallas Times Herald, Texas Monthly, and Rolling Stone. Curtis co-founded Houston City Magazine in April 1978, and was a senior editor at Texas Monthly 1987-1990. A freelancer throughout most of the 1990s, Curtis now freelances from Galveston.

Thorne Dreyer was a pioneering underground journalist in the 1960s and 1970s, as founding editor of two of the nation’s most important underground papers, The Rag in Austin and Space City! (originally Space City News) in Houston, and was a member of the editorial collective at Liberation News Service in New York. Dreyer now lives in Austin where he is a director of the New Journalism Project, edits The Rag Blog, an internet news magazine, and hosts a weekly radio show on KOOP-FM. 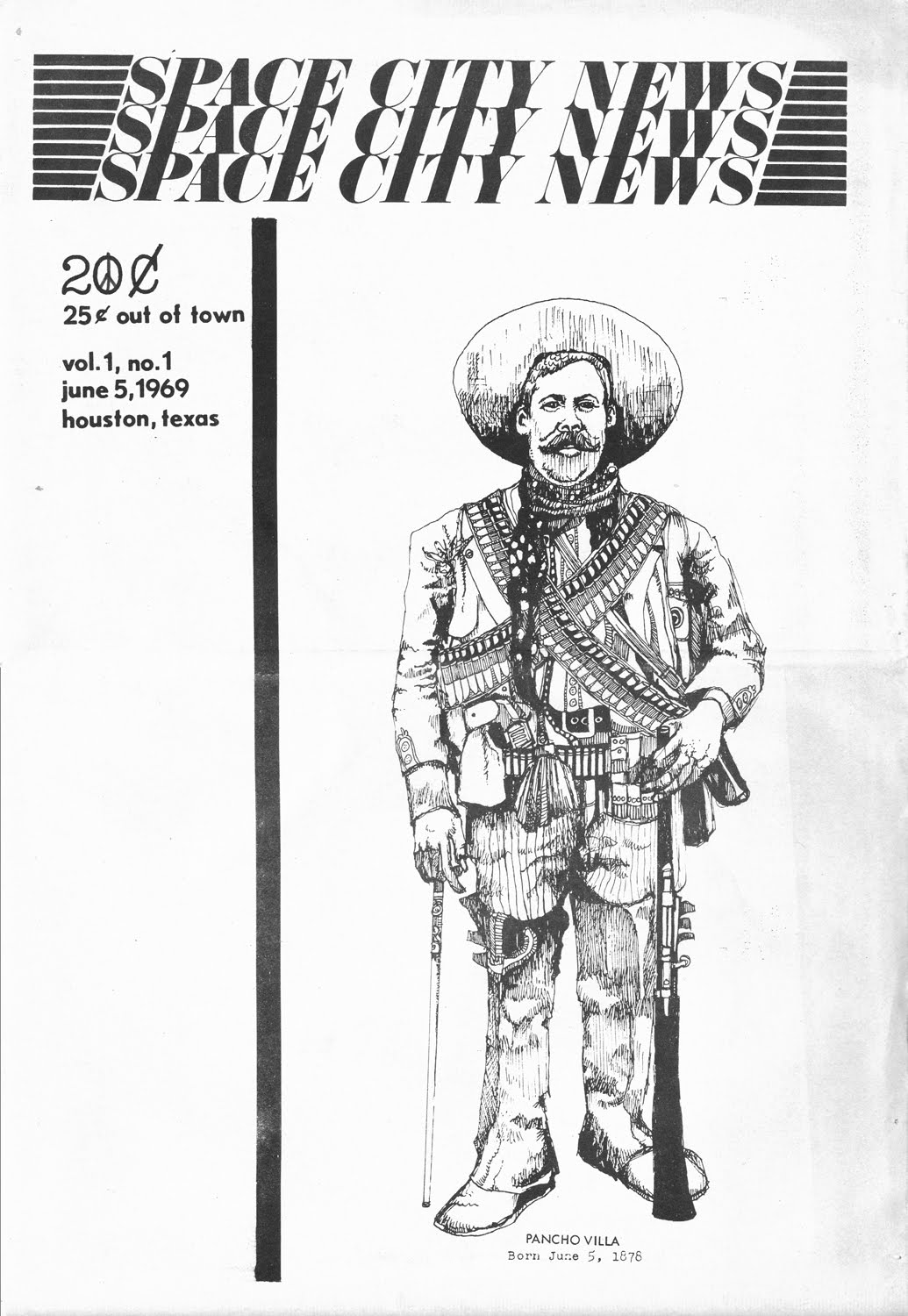 3 Responses to Underground in H-Town : A Rich History of Alternative Media