Wanted in Rio : ‘Prophets of Ecology’ 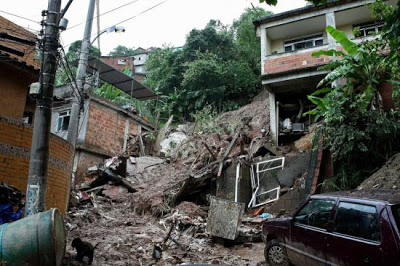 Landslide in Mangueira shantytown in Rio de Janeiro, Brazil, after a 17 hour downpour that ended on April 6, 2010, resulting in death and devastation. Photo by Marcelo Sayao / EPA.
High water in Rio:
‘Prophets of ecology’ would save lives

RIO DE JANEIRO — Between April 5th and 8th the State of Rio de Janeiro (the city and other neighboring cities, especially Niteroi) experienced the worst flood in 48 years. There were high waters in main streets, landslides in the hillsides, and the Rodrigo de Freitas Lagoon rose one and a half meters, caused in part by the high tide that blocked the rain water from draining. Worst of all were the deaths of hundreds of people, who were buried alive by tons of earth, trees, rocks, and garbage.

There seem to be three principal causes for this tragedy, that from time to time envelops this city that is so enchanting for her scenery — combining sea, mountains, and jungle — and for her happy and welcoming population.

The first is the flood itself, which is typical of these subtropical areas. But with that is the added burden of global warming. The tragedy of Rio must be seen in the context of tragedies that have occurred in other parts of the country, with hurricanes and prolonged rains causing enormous landslides and hundreds of victims, and the city of Sao Paulo, that has been flooded for more than a month at a time, leaving whole neighborhoods constantly under water.

Some analysts talk of changes in the hydrologic cycles caused by the warming of the waters of the Atlantic Ocean, as is already happening in the Pacific. This scene will tend to repeat itself ever more frequently, and with ever greater intensity, as global warming worsens.

The climatic tragedy brought to light the social tragedy endured by the most needy populations. This is the second cause. There are more than 500 favelas (slums), dangling from the sides of the mountains that twist and turn around the city. They are not the cause of the landslides, as the governor said. The people live in these dangerous zones simply because they have nowhere else to go.

There is a noticeable general insensibility toward the poor, resulting from the elitism of our colonial and slavery tradition. The State is not organized to care for the whole population, but primarily for the well-to-do classes. There has never been a consistent public policy that included the favelas as part of the city and, consequently, developed them, guaranteeing them safe living spaces, drainage infrastructure, water and electricity, and, least of all, transportation.

There have always been poor policies towards the poor, who are the great majority of the population, and good policies for the rich. The consequence of this lack of attention is seen in the disasters that end up taking the lives of hundreds of people.

The third cause is what I would call the lack of “prophets of ecology.” Observing the flooded streets and avenues, all forms of garbage, bags filled with refuse, plastic bottles, wooden boxes, and even couches and wardrobes, could be seen floating in the water. This is to say, the population has not developed a minimum of ecological sensitivity, to take care of the garbage produced. That garbage blocked the sewers and other rainwater drains, which caused the sudden rise of the torrential waters and the slowness with which they receded.

Porto Alegre, in the State of Rio Grande del Sur, offers a good model. Under the guidance of Antonio Cecchin, a Marist Brother, who has been working for years in the poor areas that surround the city, hundreds of places to collect garbage were organized and created. He built some 20 large sheds near the center of the city, in the point of the Big Island of the Marineros, where the garbage is sorted, cleaned, and sold to different factories that reuse it.

That makes the garbage men and women conscious that their work helps keep the city clean, so that it can be a place where everyone can live happily. With pride the garbage people wrote in big letters, behind each of their little cars, their title of dignity: “Prophets of Ecology.”

They assumed as an ideal the words of Joshep Lutzenberger, one of our main ecologists: “One single garbage person does more for the environment in Brazil than the Secretary of the Environment himself.”

If there were such “prophets of the ecology” in the State of Río de Janeiro, the floods would not be as devastating and hundreds of lives would be saved. 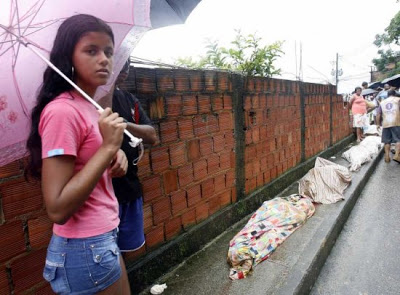 Street scene in Rio: Hundreds may have died in the flooding caused by torrential rains. Photo by Antonio Lacerda / EPA.
The Rag Blog