Who Needs Dubya? Texas Still Has John Cornyn to Embarass Us 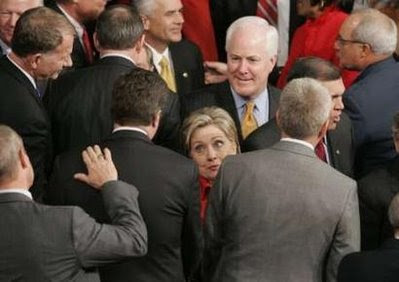 Where’s Waldo? Hillary Clinton, center, being crushed on the House floor, with Texas Sen. John Cornyn directly behind her. Photo by Reuters.
‘His petty little snit in holding up the appointment of Hillary Clinton to State for an extra day just offers a sniff of dumbness to come.’

See ‘John Cornyn’s True Nature Comes Out of the Closet,’ Below.

Dubya may be gone (though certainly not forgotten), but his erstwhile lapdog continues to howl. How in the world did Texans reelect Sen. John “Corn Dog” Cornyn, our sad sack of a Republican embarassment? His petty little snit in holding up the appointment of Hillary Clinton to State for an extra day just offers a sniff of dumbness to come.

Sarito Neiman wrote from New York: “Can’t you guys get rid of this turkey?”

The following comes from boadicea at Texas Kaos.

As the Republican Party leaders do their damndest to reduce their relevance and constituency by being institutional assholes, John Cornyn’s ambition and true nature assert themselves.
By voting against confirmation for Hillary Clinton on the day of President Barack Obama’s inauguration he proved that the only thing Big about “Big John” is his pettiness.

Oh, and his ego. With John McCain back to his “I’m not any Republican, I’m a MAVERICK” schtick, and Sarah Palin back in Alaska, John figures he’s the next up for a national profile, and he used his vote in the Foreign Relations committee to get him some face time with reporters.

As the GOP’s new point man on Senate elections, Cornyn faces a daunting task. His party lost eight seats in November and is currently down to 41 out of 100 – a 28-year low.

But he offered a relatively upbeat assessment in his first roundtable with reporters since colleagues picked him to lead the National Republican Senatorial Committee in November.

Foremost, he said, Democrats badly mishandled the Illinois seat left open by Obama. Roland Burris – chosen by Gov. Rod Blagojevich, who has been impeached for allegedly trying to sell the job – will be sworn in today.

Cornyn called the situation “a national embarrassment” that could open a GOP opportunity in a state Republicans would ordinarily have written off next year.

Really, a Texas Republican is going to try to make the case for a “national embarrassment”? The party of Tom Delay, Tom Craddick, George W. Bush, Alan Keyes, Sarah Palin, Larry “Wide Stance” Craig, and Ted Stevens is gonna make the case the the Republicans are the sane, non-embarrassing party?
That should be amusing.

The only thing Cornyn’s going to confirm is that he can be counted on-whether from Terri Schiavo, Box Turtle Love, or bipartisan leadership at a critical time for the American people-to be the biggest asshole in the room.

Let’s give him hell.

I know we are stuck with him for the next six years but this does not mean Cornyn should be able to do whatever he wants whenever. He represents all Texans, not just his base of fat cats and right wingers.

Every time Cornyn does something stupid and embarrassing, which will be most of the time, let’s blast him with messages of protest. I posted the info below yesterday in comments on BOR on Daily Kos after reading about Cornyn’s embarrassing stunt.

We pay his salary – that dude works for us and we should remind him of that on a daily basis.

This entry was posted in Rag Bloggers and tagged Hillary, John Cornyn, Texas. Bookmark the permalink.

1 Response to Who Needs Dubya? Texas Still Has John Cornyn to Embarass Us