Winter Soldier : GI’s Against the War Tell Their Stories 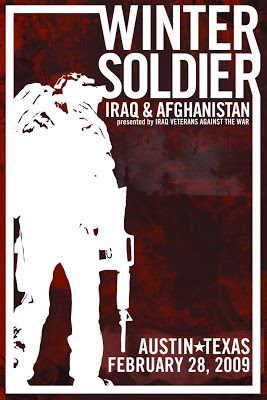 Unlike the Vietnam war, the wars in Iraq and Afghanistan take place behind a curtain of national indifference. By and large, the media has relegated these wars to a remote soundtrack. The nation has turned its attention to an election and a failing economy.

In the 60s, the draft made Vietnam personal. The current wars are personal only to those serving in them, their families, and the people of Iraq and Afghanistan. That is why you should try to attend the Winter Soldier testimony this weekend in Austin, Texas. Modeled after the February 1971 testimony organized by Vietnam Veterans Against the War (VVAW), this testimony will come from those soldiers and marines for whom these occupations are intensely personal.

The Iraq Veterans Against the War (IVAW) invites the public to a Regional Winter Soldier event, 1-5 p.m., Saturday, February 28, 2009, at the Central Presbyterian Church, 200 East 8th Street (Brazos and 8th).

For more information on Winter Soldier, please go to the Austin Iraq Veterans Against the War website.

This regional Winter Soldier event will feature testimony from U.S. veterans from Texas and surrounding states. They have served in the occupations. They will give their accounts of what has really happened on the ground and of their transformations to antiwar activists. Brandon Neely of Houston, a former Guantanamo camp guard, will be among the veterans giving testimony. Neely was recently interviewed on the Rachel Maddow Show on MSNBC. [See Rag Blog story on Brandon Neely.] 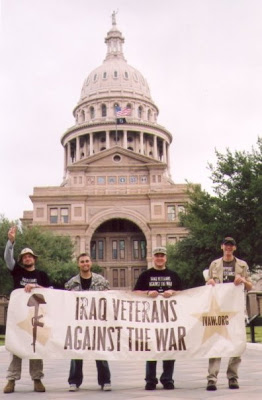 Austin Iraq Veterans Against the War at the Texas State Capitol in Austin, on Veterans Day, 2008.
Despite the election of a new president with a promise to end the war in Iraq, we are ramping up deployments to yet another arena where military occupation is likely to be prolonged and bloody with no clear end in sight.

The neo-con architects of these wars promised they would cost little and be over quickly. Those neo-cons learned a couple of lessons from the Vietnam era. One is to keep the consequences off television. Another is to avoid a draft. They know, particularly now, that they can rely on an economic draft. That is why military recruiters aggressively target working class schools and neighborhoods with their lures of bonuses and opportunities.

This Saturday, Feb. 28, honor the courage of those GI’s who resist. Come to Winter Soldier. Work with IVAW to end the wars in Iraq and Afghanistan and secure just treatment for military personnel.

The day following Austin’s Winter Soldier event, there will be a grand opening of a new GI coffeehouse in Killeen, Texas, near Fort Hood, called Under the Hood. In the tradition of the Oleo Strut of the 1960s, Under the Hood will provide a place for soldiers, military families and their friends to relax, find resources on GI rights and talk freely.

In the words of Ann Wright, U.S. Army Colonel (retired) and former U.S. State Department official, “The Under the Hood café offers an oasis for members of the military to gather and talk of issues of importance.”

For more information on the Sunday, March 1 opening, please visit the Under the Hood website .