A Landmark Worth Saving: The School That Ended Segregated Schools 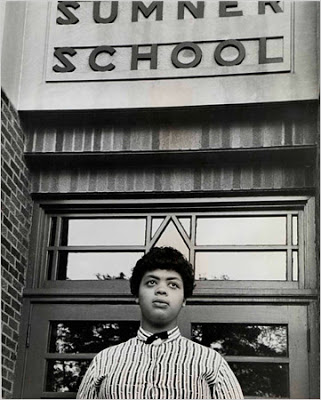 TURNED AWAY Linda Brown was rejected when her father tried to enroll her at Sumner. Photo: Bob Pearman/Kansas City Star.
In Purchase of School, Hopes of Saving a Neglected Monument
By Susan Saulny / July 19, 2009

TOPEKA, Kan. — The classrooms are haunting in their dusty silence.

It has been more than a half-century since Sumner Elementary School, now an abandoned shell of a building, had a brief and ignoble moment in the spotlight for what it would not do: allow a black father from the surrounding neighborhood, Oliver L. Brown, to enroll his daughter Linda in the third grade.

Mr. Brown, along with a group of similarly rejected black parents, brought a lawsuit against the school board here that went on to become one of the landmarks of this country’s legal history: Brown v. Board of Education, the outcome of which banned segregation in public schools across the country and set off an era of civil rights progress.

Sumner’s own future was less auspicious, however. Closed in 1996, used as storage space, neglected and vandalized, it barely escaped the wrecking ball. But now, a new owner hopes to bring the spotlight back again, and this time the result would be more flattering: plans call for Sumner to be opened to the public as a community center and human rights memorial after renovation next year.

“I believe we can make this place a catalyst for inspiration and hope for people,” said the new owner, the Rev. W. R. Portee, minister of a nondenominational Christian church based in Los Angeles who bought Sumner at a city auction in April for $89,000. “I want to involve the whole community and people beyond Topeka.”

Mr. Portee, 70, said he was shocked to learn that Sumner was available for bidding. The Rev. Zaire Thomas, a local minister overseeing a branch of Mr. Portee’s church, found the building while driving around Topeka looking for vacant sites that might be rehabilitated for a community center. Mr. Thomas forwarded the Sumner information to Mr. Portee, unaware of its past.

“I said, ‘Get it!’ ” Mr. Portee, a former civil rights activist, recalled. “ Bid on it!’ I knew instantly we had to save that building.”

It was in dire condition.

Last year, the National Trust for Historic Preservation put Sumner Elementary on its list of most endangered sites, concerned about how close a monument of American history was coming to slipping away altogether. 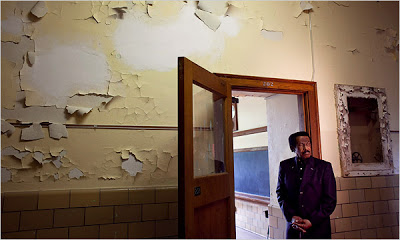 HISTORY IN DISREPAIR When the Rev. W. R. Portee learned that Sumner Elementary was for sale, he said, “I knew instantly we had to save that building.” Photo: Steve Hebert/New York Times.

The school was named a National Historic Landmark in 1987, along with the formerly all-black school that Mr. Brown’s daughter attended, Monroe Elementary. But, according to the National Trust, because Sumner was still in use at the time for classes and Monroe was not, Monroe was selected to house the Brown v. Board of Education National Historic Site, the official commemorative location operated for the public by the National Park Service.

Sumner, on the other hand, was largely forgotten.

Enrollment dwindled over the years. Then, in another twist having to do with race, Sumner was one of eight schools closed as part of a local desegregation plan that was an effort to satisfy the original Brown case, which was re-opened in the 1980s and not closed until 1999. The school’s age and cost of upkeep also worked against it, a spokesman for the school system said.

For a while, Sumner was used as storage for the Topeka and Shawnee County Public Library, which bought the building after it closed as a school. In 2002, the city bought the building from the library, with a hope of rehabilitating it. But because the city grew increasingly short on money over the years, the building languished, according to the deputy city manager, Randy Speaker.

The city tried unsuccessfully to sell Sumner several times, and even considered demolishing it at one point.

“It was a situation where the city did not have the resources to renovate it,” Mr. Speaker said, “and thought it would be in better hands in the private sector.”

In January, the city put the school up for auction. Mr. Portee’s umbrella group, True Foundation World Outreach Ministries, outbid one other potential buyer and the sale was finalized in the spring, Mr. Speaker said.

When Mr. Portee and Mr. Thomas hired a landscaper to start cleaning up the grounds this month, the man said he found himself literally in over his head.

“I’m 5-11, and the grass was taller than that,” Donald Dunbar, the landscaper, said. “I never thought much about the building. But I get cold chills thinking about it now that I know what happened here.”

Built in 1936 by the Federal Emergency Administration of Public Works, a New Deal government agency, as stated on a plaque in the school’s foyer, Sumner has an unusual amount of stone detailing in the Art Deco style. Because of the high quality of the original construction, it retains many of its original features, including light and bathroom fixtures, clocks, carved woodwork and even a marble-rimmed fireplace in the kindergarten.

There is no restriction on how the building may be used. Mr. Portee said he envisioned a combination educational site and community center that would be open to the public but run by the church. He is obligated to protect the structure’s basic features.

“It’s a great building, and I have high hopes for the new owners that they can restore it to its former glory,” said Amy Cole, a senior program officer at the National Trust for Historic Preservation. “It is certainly deserving both in its historic and architectural significance.”

While Mr. Portee said he recognized that significance, he also knows that he is facing an uphill battle in these economic times as he begins to apply for grants to begin renovation, starting with very little money in the bank for the job. Eight years ago, the repair bill was estimated to be about $3 million. Now, with extensive rain damage, some vandalism and the increased costs of construction, Sumner’s restoration could cost $7 million.

Still beaming with purchaser’s pride despite the work ahead while touring the grounds recently, Mr. Portee said, “I think it’s a bargain.”

This entry was posted in RagBlog and tagged Civil Rights Movement, Race. Bookmark the permalink.