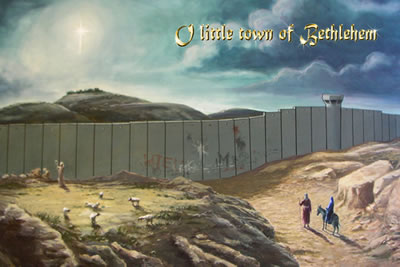 In two days, a third of humanity will gather to celebrate the birth pains of a Palestinian refugee in Bethlehem – but two millennia later, another mother in another glorified stable in this rubble-strewn, locked-down town is trying not to howl.

Fadia Jemal is a gap-toothed 27-year-old with a weary, watery smile. `What would happen if the Virgin Mary came to Bethlehem today? She would endure what I have endured,` she says.

Fadia clutches a set of keys tightly, digging hard into her skin as she describes in broken, jagged sentences what happened. `It was 5pm when I started to feel the contractions coming on,` she says. She was already nervous about the birth – her first, and twins – so she told her husband to grab her hospital bag and get her straight into the car.

They stopped to collect her sister and mother and set out for the Hussein Hospital, 20 minutes away. But the road had been blocked by Israeli soldiers, who said nobody was allowed to pass until morning. `Obviously, we told them we couldn`t wait until the morning. I was bleeding very heavily on the back seat. One of the soldiers looked down at the blood and laughed. I still wake up in the night hearing that laugh. It was such a shock to me. I couldn`t understand.`

Her family begged the soldiers to let them through, but they would not relent. So at 1am, on the back seat next to a chilly checkpoint with no doctors and no nurses, Fadia delivered a tiny boy called Mahmoud and a tiny girl called Mariam. `I don`t remember anything else until I woke up in the hospital,` she says now. For two days, her family hid it from her that Mahmoud had died, and doctors said they could `certainly` have saved his life by getting him to an incubator.

`Now Mariam is at an age when she asks me where her brother is,` Fadia says. `She wants to know what happened to him. But how do I explain it?` She looks down. `Sometimes at night I scream and scream.` In the years since, she has been pregnant four times, but she keeps miscarrying. `I couldn`t bear to make another baby. I was convinced the same thing would happen to me again,` she explains. `When I see the [Israeli] soldiers I keep thinking – what did my baby do to Israel?`

Read the rest of this heart-wrenching story here.