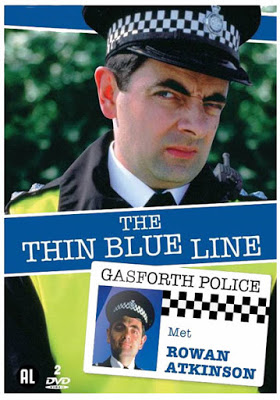 One of the cleverest, funniest-ever British sitcoms, The Thin Blue Line, available on YouTube, really should not be missed.

England’s Rowan Atkinson, best-known for the silent physical comedy of Mr. Bean, is actually a wonderful verbal comic actor — as is evident in his two classic British TV comedy series, Blackadder and The Thin Blue Line. Both were written (or co-written) by Britain’s funniest TV writer, Ben Elton. The Thin Blue Line ran for 14 exquisite episodes, from November 13, 1995 to December 23, 1996. It is set in a police station in the fictional town of Gasforth.

Atkinson plays goofy Inspector Raymond Fowler, head of the uniformed team, who annoys his live-in girlfriend and subordinate, Sergeant Patricia Dawkins, with his lack of interest in sex. His rival at the station, CID detective Derek Grim (brilliantly and hysterically performed by David Haig), is constantly mangling English phraseology. I was delighted at Elton’s ability to create weekly variations on the same joke, with Grim declaring: “It’s my arse on the line, and I’m in it up to my neck” or “…so you’d better pull your finger out” or “…so I don’t want a big cock-up.”

One of the most mind-bogglingly funny and adorable characters anywhere is Constable Goody (James Dreyfus), who is very dim. But the joke is greatly enhanced by the fact that his speech and mannerisms are extremely gay, but he thinks he is macho and is constantly trying to seduce Pakistani-British Constable Habib (Mina Anwar). The expressions of shock and surprise on his face are amazing. The rest of the cast is also quite funny.

The Thin Blue Line won the British Comedy Awards’ 1996 “Top TV Comedy Sitcom” honor, and Atkinson was nominated for the 1997 UK National Television Awards’ “Most Popular Comedy Performer.” More than 93.1% of the 2,052 viewers who rated it at Internet Movie Database gave it thumbs-up, and 24.1% consider it a perfect 10.

It is available on Netflix and Netflix Instant streaming, as well as on YouTube, where you can see this riotous Christmas episode in two parts.