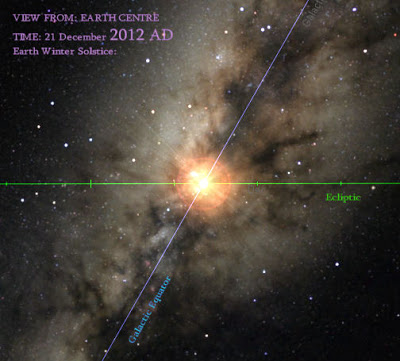 The sun at the intersection of the galactic equator and the ecliptic. Image from Philosophy for Real Life.
Is the end near?
The Mayan Calendar

On December 21 the 13th baktun will come to an end. Rather than starting a 14th baktun, the grand cycle will start over again. It’s like your car odometer rolling over from all nines to all zeroes.

In about 500 BC astronomers in the Yucatan Peninsula predicted that a remarkable event would happen some 2,500 years in their future. They thought it so significant that they constructed a complex calendar full of cycles within cycles such that all the cycles would come to an end (and thus a new beginning) at once on that day.

That day is December 21, 2012, the solstice, and it is almost upon us. If we have not done so already, it is time to make preparations. But not in the way many new-age pundits, with their penchant for sensationalism, would have us believe.

I am speaking, of course, of the Mayan calendar, and the fears that the world will end in some kind of apocalypse on the December 2012 solstice. In fact, experts agree, the Maya had no conception of such an apocalypse, which is a newer and European idea. Says one researcher, “We keep looking for endings… The Maya were looking for a guarantee that nothing would change. It’s an entirely different mindset.”(1)

But if it is not the end of the world, then what will happen on the upcoming December solstice? And why were the Maya so interested in it that they constructed a calendar around it? To answer these questions we will have to delve into the Mayan calendar and astronomy. The details are complex, so here is a brief summary.

The Maya concocted a complicated calendar capable of identifying specific dates within a 5,125-year cycle composed of 13 394-year “baktuns,” which themselves are composed of cycles within cycles. On December 21 the 13th baktun will come to an end. Rather than starting a 14th baktun, the grand cycle will start over again. It’s like your car odometer rolling over from all nines to all zeroes.

The Mayan astronomers were quite proficient. They predicted that on the upcoming December solstice an unusual astronomical event would occur: the alignment (as seen from the earth) of the sun with the intersection of the galactic equator and the ecliptic. Such an alignment happens every year, but usually not on a solstice. Because of the earth’s axial precession, it happens on a solstice only once every 12,900 years.(2)

The Maya predicted the timing of this unusual event and constructed their calendar so that it would end at this occasion. Their calendar does not so much begin at an arbitrary date in the past but end at one in the future. They worked backwards from the astronomical event they believed would happen on the upcoming December solstice.

That’s the story in a nutshell; for those interested in the details I give a more comprehensive explanation here. But what does it mean? Will the arrangement of the stars on a certain day actually have any unusual effect on us?

In terms of physical effects, the answer is No, for two reasons. The first is that there is no physical evidence that any arrangement of stars and planets has anything other than physical effects. The rotation of the earth determines day and night; its progress through its yearly orbit and the inclination of its axis determine the seasons; the positions of the sun and moon determine the tides; and the gravitational forces among the various heavenly bodies determine their orbits and hence their position in the sky from our point of view.

But there is no objective, third-party evidence that their positions and movements have any nonphysical influence on human affairs. (They might, as astrologers maintain; but the objective evidence for that influence is at best sketchy.)

The second reason is that the Maya got it wrong, by about 14 years. There was indeed such a conjunction of the sun and the intersection of the galactic equator and the ecliptic at a solstice, but it happened in 1998.(3) So even if the conjunction could cause an unusual effect, it would have already happened. Apart from the Mayan calendar, there is nothing special about the upcoming solstice.

And yet we have the Mayan calendar and it does have an effect on us. You might call that effect socially constructed, but it is real nonetheless. Had the Maya not made something of the December solstice of 2012, we would not be having this conversation. But they did, and millions of people worldwide, not just you and I, have heard of the upcoming event even if they don’t know precisely what it entails.

We can, if we choose, make use of the psychic force of all that attention.

The image is striking: cycles within cycles within cycles, all ponderously but inexorably coming to an alignment, a zero point, after 50 centuries. I imagine a great wheel slowly turning once every 5,125 years and within it a smaller wheel turning once every 394 years and within that yet smaller ones, the least of which turns every 20 days, a spinning whirligig of clockwork that drives an immense and awesome epoch.

And the beginning of a new epoch is almost upon us.

To mark it, to make something useful of it, I suggest the following practice:

We are very close to the axle of an immense wheel, an axle that has great gravitational attraction. Imagine that you are in the plane of that wheel and you launch something toward the axle. Your payload comes close to the axle and whips around it with tremendous speed and then flies off into the future.

For a more complete and detailed explanation of the Mayan Calendar based on Bill’s research on the subject, go to Bill Meacham’s Philosophy for Real Life.