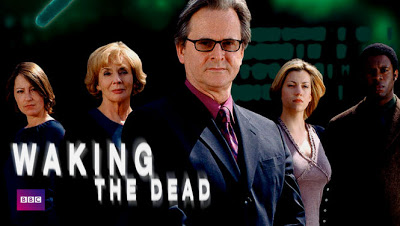 It aired 46 two-part episodes between 2000 and 2011 over nine seasons — five of which are currently on Netflix. It starred Trevor Eve as the head of a fictional cold case unit, Sue Johnston as its profiler, and Wil Johnson as a police officer.

In seasons 1-5 they were teamed with Holly Aird as a forensic scientist, and in seasons 1-4 Claire Goose was a police partner on the team. Others replaced the latter pair in subsequent series, including Tara Fitzgerald (Brassed Off, Sirens), who briefly headed the six-episode spinoff series The Body Farm, after Eve left the show.

The cold-case team uses new evidence, including DNA, to re-open and solve old cases. Here is an episode.

Series producer Colin Wratten said about the research and grisly special effects on Waking the Dead: “With the amount of gruesome script research I’ve done on my BBC computer, I’m probably on every government watch list.”

This is a compelling, dramatic cop series, and it had a nice long run.