Demonstrators mark the anniversary of Archbishop Romero’s assassination with calls for an end
to refugee detention. 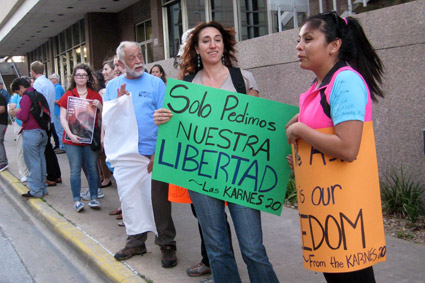 AUSTIN — On March 24, the anniversary of Archbishop Oscar Romero’s assassination in El Salvador in 1980, immigration rights activists commemorated his life with a National Day of Action. In cities across the country, demonstrators called for freedom for refugee families at immigration detention centers at Karnes City and Dilley, Texas.

Romero, a liberation theologian who spoke out against poverty and social injustice, was the fourth Archbishop of San Salvador. On February 3 of this year, Pope Francis declared him a martyr.

These simultaneous actions carried the same demands of the Obama Administration:

Rev. Jim Rigby of St. Andrew’s Presbyterian Church in Austin, recalled the memory of Archbishop Oscar Romero, shot while delivering mass in San Salvador. The United States, he said, bears responsibility for destabilizing Central America, yet refuses to embrace refugees from the violence we’ve perpetuated. Remembering the U.S. role in the Central American civil wars, Rev. Rigby said, “We call ourselves Moses, but act like Pharaoh.”

Esther Portillo from El Salvador read a letter from 20 of the women being held at Karnes. The letter described the poor conditions in the for-profit prisons, the dietary problems that families face, the number of children who are ill, and the prolonged detentions. 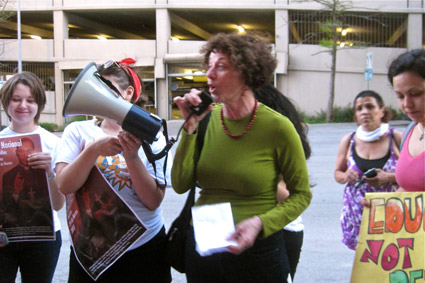 Immigration attorney Barbara Hines reminded the crowd that it was both legal action and a mobilized community that ended family detention at the T. Don Hutto unit outside Taylor, Texas. “We will win this fight as well,” she told the crowd.

[Rag Blog contributing editor Alice Embree is co-chair of the Friends of New Journalism and a veteran of SDS, the original Rag, and the Women’s Liberation Movement. Alice is a long-time Austin activist, organizer, and member of the Texas State Employees Union.]