Alice Embree : War is Trauma but GIs Have the Right to Heal 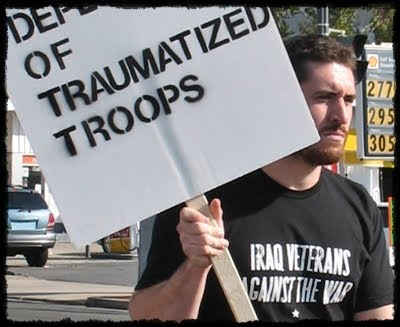 For more than a decade, two declared wars have raged in Iraq and Afghanistan. War has traumatized civilian populations there and sent thousands of service members home suffering from trauma. With no end in sight to the wars, these servicemen and women face redeployment despite diagnoses of Post Traumatic Stress Disorder (PTSD), Traumatic Brain Injury (TBI), and Military Sexual Trauma (MST).

Iraq Veterans Against the War (IVAW) and their civilian allies have embarked on a campaign that has a simple message: the right to heal. IVAW’s Operation Recovery advocates that service members who experience PTSD, TBI, MST, and combat stress have the right to exit the traumatic situation and receive immediate support and compensation. IVAW organizers talk to soldiers about their right to receive medical care and advice from medical professionals, advice that should trump a commander’s orders.

In Killeen, the G.I. coffeehouse Under the Hood, is the forward operating base for Operation Recovery. Aaron Hughes, an IVAW organizer, was pulled out of the University of Illinois in 2003 and sent into active duty in Iraq with his Illinois Army National Guard unit. Tall and serious, Aaron and other IVAW members have spent many weeks in the brutal summer heat of Killeen, Texas, talking to soldiers at Fort Hood, the largest Army base in the world.

Here, they can find plenty of soldiers who have returned from deployment, been diagnosed with trauma, have not been treated, and have simply been readied for deployment again. There are also many soldiers who have never been appropriately diagnosed. Unfortunately, at Fort Hood, these situations often translate into the worst possible result — suicide.

Aaron Hughes and other IVAW organizers have an easier time explaining Fort Hood’s record-breaking stat. The Army is first and foremost committed to keeping troops available for wars that are far from over. They direct inadequate resources to the diagnosis and treatment of traumatized soldiers. Service members often struggle in isolation with the invisible wounds of trauma — wounds that fester in secrecy, wounds that affect spouses and children, families and friends.

Service members return to a country where the wars are invisible to a majority of their fellow citizens — where media attention is lavished on the stupidity of stars and the cacophony of what passes for political debate. War coverage just doesn’t attract advertisers like “Dancing With the Stars.”

In the midst of this, IVAW has a powerful message: “You are not alone.” “You have the right to heal.” If there is one lifeline that can work for soldiers in trauma, it is to tell their story to peers who have walked in their boots.

Since it opened in February 2009, Under the Hood Café and Outreach Center has offered a space for active duty soldiers, military families, veterans, and concerned citizens to socialize, organize, and heal. You can support this space by coming to a benefit from 6-9 p.m., Sunday, October 2, at Jovita’s in Austin. Hear the Austin Lounge Lizards and other musicians and support a great cause

For more on Operation Recovery,
listen to the Rag Radio interview with IVAW soldiers:

[Alice Embree is a long-time Austin activist, organizer, and member of the Texas State Employees Union. A former staff member of The Rag in Austin and RAT in New York, and a veteran of SDS and the women’s liberation movement, she is now active with CodePink Austin and Under the Hood Café. Embree is a contributing editor to The Rag Blog and is treasurer of the New Journalism Project. Read more articles by Alice Embree on The Rag Blog.] 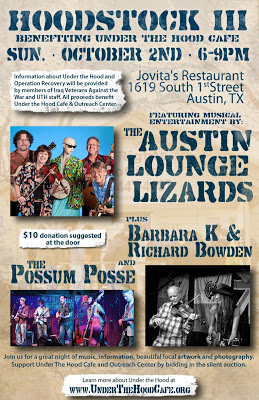 1 Response to Alice Embree : War is Trauma but GIs Have the Right to Heal