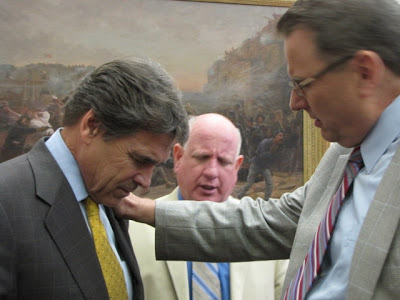 Two years ago, two NAR ministers explained to Perry that Texas had been anointed by God to bring America to Godly rule.

[This is the third in a series on Dominionism by Don Swift.]

A former professor at Fuller Theological Seminary, Wagner is famous for helping develop the “growth model” that was to produce the huge megachurches that now dot the land. He and his followers aim for a post-denominational Christianity shaped by them. Their leaders are God’s new apostles and prophets who have greater power than the original apostles and prophets.

Spiritual warriors must convert adherents of other churches and seek political power. They think the end times will see the perfection of Christianity and they will have a perfected religion to turn over to Christ, when he returns. They will be given great power and crush evil with a “rod of iron.”

These NAR Dominionists look to the day when they and, above all, their clergy take over society. Dr. Wagner advocates a pragmatic theology which justifies acting in a way whereby the ends justify the means. His followers tend to be Charismatics and Pentecostals, and they are post-millennialists rather than pre-millennialists. That is, they believe that Christ must return to earth before they can complete the work of establishing his Kingdom. Of course, not all Charismatics or Pentecostals are Dominionists.

The New Apostolics are busy in worldly affairs because they believe they are destined to rule. In addition they want to expel demons, witches, and sorcerers, and they claim the power to physically heal others and raise people from the dead.

They believe they have the world’s only valid religious belief system. They want a post-denominational church, but it will not be warm and fuzzy as some think. People can be forced to join the new non-denominational Christianity for their own good, and other churches can be forced to stop teaching false doctrines. One official of Morningstar Ministries admits that life under their theocratic rule “may seem totalitarian at first.”

They target youth to be members of Joel’s Army (a distortion of an illusion in Book Joel 2) to seize political power and force non-believers to accept their version of Christianity. In addition to Joel’s Army, they have used other names like Shepherding, Latter Rain, and Manifest Sons of God.

These churches engage in “spiritual warfare” as was depicted in the movie Jesus Camp. In the film, young people were trained to “take dominion” over the world. They will also purge the Christian church of elements that strongly disagree with them.

These sincere Christians believe that the world is inhabited by all sorts of demons and that the powers of demons even get passed down in families, just as curses are passed down. Some demons run territories; others inhabit some of their enemies, and still other very powerful demons run churches they dislike. The reverse side of believing in evil demons is the teaching that the New Apostolics have the power to heal, raise the dead, and successfully combat the forces of darkness.

NAR Dominionists seriously think some people are sorcerers or demons and must be fought. They think sorcery runs in families. They see themselves as being involved in continual spiritual warfare. NAR people see themselves as spiritual warriors and “prayer warriors” who constitute the “Army of God.” It seems we heard that name in some other context of late.

They are out to destroy the demons and evil spirits that cause problems in a territory so that the truly saved can take over and rule. Congress has helped the movement by giving it millions in grants for abstinence sex education and anti-AIDS projects.

They see secularists as members of satanic armies and demonic enemies of religion and freedom. Bill Bright, founder of the Campus Crusade for Christ, believed that demons were active agents that could take over institutions and political entities. Many Dominionists share this belief. Lou Engle, of the Family Research Council, who has also prayed with Michele Bachmann, frequently said that the people supporting health care reform were guided by demons.

Rick Perry, a Pentecostal, also has strong ties to Dominionism, but he does not seem to go as far as Rep. Bachmann. He is particularly attractive to a group of Pentecostal Dominionists who are members of the New Apostolic Reformation movement. Rev. Tom Schlueter, a New Apostolic Reformation pastor, is close to Perry. Schlueter has said that God called the NAR to infiltrate government: “We’re going to infiltrate [the government], not run from it. I know why God’s doing what he’s doing … He’s just simply saying, ‘Tom I’ve given you authority in a governmental authority, and I need you to infiltrate the governmental mountain.”

NAR pastors call the Lone Star State the “Prophet State,” meaning it was foretold that it was to be a template for the rest of America. Two years ago, two NAR ministers explained to Perry that Texas had been anointed by God to bring America to Godly rule. They had been instructed to visit Perry by one of their prophets, Chuck Pierce of Denton, Texas.

Eight NAR leaders were deeply involved in Perry’s recent prayer rally, called “The Response.” Not everyone who attended that event was a Dominionist or even knew what that term meant.

Few note that Governor Perry sent invitations on official stationery and promoted it on a state government web site. Dominionist Mike Bickle of the International House of Prayer also played an important role at the event. He claims that demons have repeatedly attacked him and is known for his address “Authority of the Believer, Exercising Our Dominion in Christ.”