Amanda Marcotte : Does Weinergate Mark an End to Sexual Privacy? 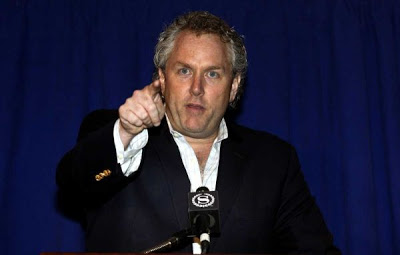 Prior to this scandal, the media and political operatives had to at least pretend that a politician’s sex life had some bearing on the public interest before they picked up the pitchforks.

Like most political junkies who tuned in to Anthony Weiner’s press conference confession of online flirtations, I went through a series of emotions: irritation at Weiner’s stupidity, anger at Andrew Breitbart’s sleaziness, frustration that this story gets coverage during an economic crisis, and embarrassment for the reporters who thought it appropriate to ask if he’s getting professional help or demand that Weiner’s wife stand around so that everyone can gawk at her.

But one concern rose above all others. This scandal may represent the end of the presumption of sexual privacy for politicians, and possibly even for journalists, activists, and bureaucrats — anyone whose public humiliation could benefit the ideologues wed to the politics of personal destruction.

Prior to this scandal, the media and political operatives had to at least pretend that a politician’s sex life had some bearing on the public interest before they picked up the pitchforks. Being an adulterer wasn’t, in and of itself, a matter of public interest. There had to be a hook.

If you were a social conservative who advocated for using the government to control the sexual behavior of consenting adults, for instance, then you were held to your own standard and your adulteries were considered public business. If you opposed gay rights, your own history of same-sex relations was fair game. If you broke an anti-prostitution law you vigorously enforced on others, like Eliot Spitzer, you had no reasonable expectation of privacy.

Arnold Schwarzenegger had a long past of being accused of sexual harassment, so the state of the marriage he used as a shield matters. Even at the height of the national panic over Bill Clinton and Monica Lewinsky, Clinton’s detractors claimed that it wasn’t the sex that was the issue, but the perjury. No one believed them, of course, but the claim at least paid tribute to the idea that the private sexual choices of those who support sexual privacy are not the public’s business.

But with this Weiner scandal, there’s not even the veneer of an excuse in play. Weiner has an outstanding record supporting sexual rights of others, with 100% ratings from NARAL and Planned Parenthood, and has a strong record of support for gay rights. No laws seem to have been broken, no public trust compromised, no campaign irregularities indicated, and there’s been no suggestion that his flirtations interfered with his ability to do his job.

The entire rationale for the scandal is that Weiner isn’t living in accordance with strict social mores regarding monogamy, and that’s it. Even the whining about how he lied when initially confronted is hollow. In the past, lying when someone asks nosy questions that are none of their business was considered a socially acceptable white lie. (And really, who among us would be a paragon of transparency with Wolf Blitzer waving a penis picture in our face and saying, “Is this yours?”)

The pretense that it has to matter to the public in order for the public to get involved has been dropped.

This loss of privacy should worry people more than whether or not Weiner was right to lie or even how rude it was of Andrew Breitbart to hijack the press conference. The presumption of sexual privacy may have been stretched at times past the point of recognition, but this represents the first time it’s really snapped, at least in my memory.

If this Weiner scandal is more than a blip, and instead the beginning of a free-for-all of rooting through politicians’ trashcans to make sure their private sex lives adhere to someone else’s standards, where will it all end?

There are two main concerns when personal choices — or even failings — become a matter of public interest, even if it doesn’t affect the public. One is that it opens the door to real witch hunts where no one is truly safe, and the other is that it will degrade the quality of the actual work people are doing that actually does affect the public.

The problem with opening the door to conducting sex scandals where simply violating some sexual standard is all that’s needed is that the question arises: Who gets to set the standards? The answer is probably closer to “the religious right” than “Dan Savage,” if only because the more sexually liberal out there don’t bother with feigning outrage at the private behavior of consenting adults.

You saw this problem erupting with the Weiner press conference, where reporters asked questions that implied that a standard of monogamy be applied across the board, regardless of the preferences of the people actually in the marriage, and that failure to comply with monogamy standards constitutes a grievous personality flaw that requires professional intervention. (One shouted question specifically asked if Weiner was seeking professional help.)

Once the standard for a sex scandal moves from “public interest” to “arbitrarily deciding this person’s behavior is gross/immature/offends Jesus,” it’s open season. Today the crime is not following the standards of monogamy set by those outside your marriage (since we don’t know the details of Weiner’s relationship with his wife, these are the only standards really in play).

Tomorrow, it could be that your personal behavior offends people who don’t approve of premarital sex or who think it’s gross or silly for adults to play little private games with each other. Already, half the reason this is a scandal is that Weiner said things while flirting that sound silly in a more public context. Can any of us really say that 100 percent of our flirtations in life would pass the scrutiny of a hostile audience out to maximize our humiliation?

If these new standards come in to play, it will mean a drastic reduction in the number of people willing to risk running for office — or be activists or writers or anyone that Andrew Breitbart deems interesting enough to start a harassment campaign against. Sensible people, realizing their sex lives will be an open book, will choose careers that don’t attract the attention of witch hunters.

Unfortunately, those sensible people are exactly the kind of people we need more of in politics, having already ceded so much ground to the Bible-thumpers and people who believe that Obama is starting secret campaigns to confiscate guns and kill old people. Weiner, for instance, was targeted because he’s willing to fight the good fight on major issues of interest to liberals.

Of course, running sensible people out of politics would suit the ends of Andrew Breitbart and his faux outrage machine just fine, which is all the more reason that he should be resisted.

[Amanda Marcotte co-writes the blog Pandagon. She is the author of It’s a Jungle Out There: The Feminist Survival Guide to Politically Inhospitable Environments. This story was published at and distributed by AlterNet.]

1 Response to Amanda Marcotte : Does Weinergate Mark an End to Sexual Privacy?