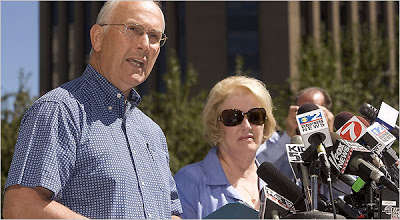 1. Skip the press conference, especially when your husband is copping to call girls, gay pickups in airport bathrooms or “tragic” and “forbidden” telenovela-style love stories. Stoicism at the skunk’s side is overrated and, as Larry Craig’s wife learned, sunglasses don’t help.

2. When there’s an Associated Press bulletin quoting your husband saying that he has found his soul mate but he’s going to try to fall back in love with you, change the locks. (At your second home, too.)

3. If you can’t maintain a dignified Silda Spitzer silence; if you can’t find a girlfriend, a shrink, a personal trainer, a hairdresser or a yoga teacher to confide in; if you must unburden yourself of your fury about your loser husband, go to Jesse Jackson, Al Sharpton or even Deepak Chopra before crying to The A.P. A news wire is not a spiritual adviser.

4. When your husband turns into a Harlequin romance, babbling to The A.P. — yes, even The A.P. thought it was T.M.I. — about a magical encounter on an open-air dance floor in Uruguay, “a soul that touches yours in a way that no one’s ever has,” and the “left brain and right brain” compartmentalization of “the world of ideas that impact this country and state” and “the pursuit of happiness, whatever that is,” just beat it.

5. If you think the worst is over, it’s probably only beginning. On Tuesday, after you thought Mark Sanford had already emoted and burbled more than any man in history, he volunteered to The A.P. (again!) that he had “crossed lines” with a handful of women on trips out of the country, but only “crossed the ultimate line” with his enchanting Maria. And just when you thought John Edwards could not sink any lower, there is news of a sex tape, in which Rielle Hunter shows off her skills not only in videography but pornography.

6. No matter how revolting your husband’s behavior is, don’t be passive-aggressive in public. Refrain from making any remarks that have a veneer of dignity but derogatory subtexts that sound like: “We’re trying to reconcile but it’s going to be tough because he has irreparably damaged my children” or “He has no integrity and I want my kids to have integrity” and “Sure, I’d like to give him a chance if he weren’t such a sleazeball.”

7. Don’t bring the children into it. They suffer enough being the kids of politicians. In the era of Facebook, texting, Google and iPhones, calling him out as a bad father will just go viral in the kids’ circles. Don’t trot out the family on “Oprah,” as Elizabeth Edwards did, or weepily show The A.P. the report cards of your two oldest sons from their elite private school in Columbia, S.C., as Jenny Sanford did.

8. Even if you’re a clever, competent woman, you risk sounding like a stereotypical harridan if you use the kids as a bludgeon and tell the press, as Jenny did: “You would think that a father who didn’t have contact with his children, if he wanted those children, he would toe the line a little bit.” When kids are involved, it’s best to chill when dishing out revenge.

9. Don’t slam his girlfriend for lying when you know she’s telling the truth. Don’t refer to the baby your rival had with your husband as “it.” Don’t trash a mistress, as Hillary and Elizabeth did, as a wacky stalker. No one — except the wife — blames the girlfriend as much as they blame the husband. Besides, you invite The Other Woman’s retaliation, as when Rielle decided — after watching Elizabeth spill to Oprah — that she might want that DNA test after all.

10. High-powered women like Hillary, Elizabeth and Jenny who give up their careers to focus on their husbands’ ambitions feel doubly betrayed. But it’s not your husband’s fault if you sacrifice more for the relationship than he does. Like an investor in a down market, you took a risk without a guarantee it would pay off. If you make your husband your career and you lose your husband, you lose your career, too.

11. Cut your losses and keep going. Don’t let yourself get dragged into his drama or your reputation may follow his down the well. Hillary refused to let that happen. She salvaged her long investment in Bill Clinton and turned a profit when she became a senator.

12. As you stay out of the spotlight that singes your husband, listen to whatever messages he is sending you through the press. When your husband says that is a world-class love story, ask him what this is. Just don’t do it through The A.P.

This entry was posted in RagBlog and tagged Politics, Sexuality. Bookmark the permalink.