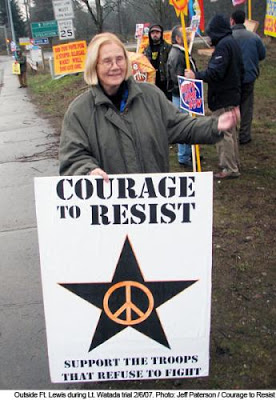 Retired Col. Ann Wright was one of three U.S. diplomats to resign in protest over the American invasion of Iraq in 2003.
Retired soldier now in fight against war in Iraq
By Bill Sizemore / September 24, 2008

NORFOLK – For Ann Wright, it’s a badge of honor that Fox News host Bill O’Reilly once cut off her microphone midinterview.

“He was questioning my patriotism,” Wright said in an interview this week. “All I had said was that the United States needed to follow the Geneva Conventions in its treatment of prisoners. I said, ‘Bill, I was in the military 29 years and I was a diplomat for 16 years. What have you done for the country?’ “

Presumably Wright, 61, won’t have to worry about being cut off when she speaks tonight at the Naro Expanded Cinema about her unlikely odyssey from soldier to diplomat to full-time anti-war activist.

By her own description, hers was a “squeaky clean” life story. She grew up in Bentonville, Ark., where she was a Girl Scout and her father was a banker who gave Sam Walton a loan that helped launch the Wal-Mart empire.

After retiring from the Army as a colonel, she joined the State Department and served in a variety of overseas posts, including reopening the U.S. Embassy in Kabul, Afghanistan, after the 2001 terrorist attacks.

Over the decades, she said, she had often disagreed privately with U.S. policy but kept her mouth shut, believing she could serve best within the system.

“But it all changed when President Bush decided that he would invade and occupy an oil-rich Arab Muslim country that had not attacked the United States,” she said. “It was such a dangerous move for the United States that I felt I could not be a part of it.”

Wright was one of three U.S. diplomats to resign in protest over the American invasion of Iraq in 2003.

Since then she has been arrested 15 times for raising her voice in a public and indelicate manner. Once, after lecturing the Senate Foreign Relations Committee from the gallery, she was sentenced to three days in jail.

Wright has co-written a book, “Dissent: Voices of Conscience,” a collection of profiles of men and women in government who have publicly criticized the Bush administration’s foreign policy.

Appearing with Wright tonight will be Jonathan Hutto, a sailor and co-founder of Appeal for Redress, an organization that encourages active-duty personnel who are against the war in Iraq to speak out.

This entry was posted in RagBlog and tagged Peace Activists, Peace Movement. Bookmark the permalink.