ASYLUM, TERROR, and the FUTURE #2 Happy 18th Birthday from Anne Lewis on Vimeo.

Saturday morning at the greyhound bus station in Harlingen — yard sale a block down the street — a homeless woman paces back and forth in front of the station; bird calls and Bank of America building in the background. We are told that we cannot film inside.

This is one of the places where families are left after detention in hieleras — if they have relatives who will sponsor them. Volunteers pick them up at the bus stations along the border, assess their medical needs, take care of them in shelters, provide them with information about help along the way, and return them to the station for their trip north and east and west. 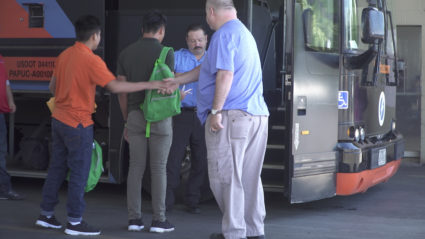 This morning Michael, a high school teacher and volunteer with La Posada, brings two young men from Guatemala to the station. They have been held at a Southwest Keys youth detention facility in Brownsville along with 1,400 other young people since crossing the border — one since October, the other since December. Joyce Hamilton, one of the Angry Tias and Abuelas of the Rio Grande Valley, sees their black bags and greets them “Feliz cumpleaños.”