Anne Lewis :
STORY & VIDEO PODCAST | Asylum, terror, and the future #6: Nazis among us

Asylum, Terror, and the Future #6 Nazis among us based on case stories of Jennifer Harbury from Anne Lewis on Vimeo.

I remember the slogan during Vietnam anti-war protests, “Fascism is imperialism turned inwards.” We took that to mean that once we had forced an end to the war (along with the North Vietnamese), the ruling class would turn on U.S. workers for exploitation and profit instead of relatively privileging them.

We now know that it is entirely possible to have both fascism and imperialism at the same time. The slogan was probably based on Lenin’s definition of both imperialism and fascism as embodied in “decaying capitalism.” We also had the illusion that capitalism would collapse in on itself (perhaps as early as 1974) giving us the opportunity to build a better world.

We posed the question to Jennifer Harbury: “What is going on with our government — political opportunism, nativism, or fascism?” Jennifer’s response draws on her family history, refugees from the Netherlands where 70% of the Jewish population was killed during the Holocaust. This webcast concludes the series. 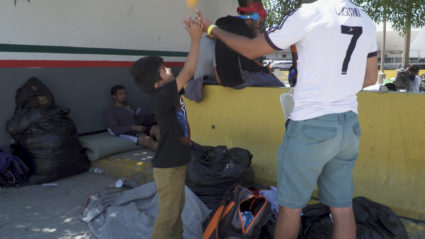 People are surprised, they become indignant. They say: “How strange! But never mind — it’s Nazism, it will pass!”

And they wait, and they hope; and they hide the truth from themselves… that they have cultivated that Nazism, that they are responsible for it, and that before engulfing the whole of Western, Christian civilization in its reddened waters, it oozes, seeps, and trickles from every crack.

We are, without question, in this together. Social change takes place when masses of exploited and oppressed people rise up in solidarity. That remains both possible and necessary, but only with organization, imagination, passion, intellect, culture, and morality. Our relationship with the refugees who petition for asylum at our border and our relationship with the countries where they originate will determine our own future.

1 Response to Anne Lewis :
STORY & VIDEO PODCAST | Asylum, terror, and the future #6: Nazis among us