Anyone Who Feels Disappointed Will Go Back 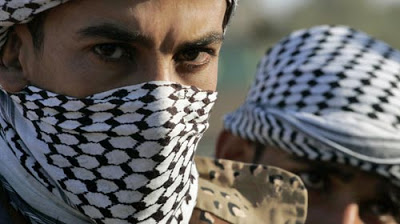 UNDER PRESSURE: Two Sunni Arab fighters in the Sons of Iraq look on this year during a military operation involving American and Iraqi forces south of Baghdad. The U.S. plans for the group to be “out of business” by June. Photo: Petros Giannakouris / Associated Press
Iraq seeks breakup of U.S.-funded Sunni fighters
By Ned Parker / August 23, 2008

Distrusted by the Shiite-led government, the Sons of Iraq face arrests and could return to insurgency. They have been key in helping calm the violence.

BAGHDAD — An emboldened Iraqi government has launched an aggressive campaign to disband a U.S.-funded force of Sunni Arab fighters that has been key to Iraq’s fragile peace, arresting prominent members and sending others into hiding or exile as their former patrons in the American military reluctantly stand by.

The Shiite Muslim-led government has long distrusted the fighters, many of whom are former insurgents. Senior Shiite politicians label some of the members murderers, and warn that there is no long-term obligation to employ them after their units are disbanded.

“The ones in Baghdad and Diyala province just changed their T-shirts. There are large numbers who were really Al Qaeda. We have to really look hard for those elements without blood on their hands,” said Haidar Abadi, a lawmaker from Prime Minister Nouri Maliki’s Islamic Dawa Party.

Amid fears that the Sunnis’ treatment could rekindle Iraq’s insurgency, the Americans are caught between their wish to support the fighters and their stronger ties to Maliki’s government, which has challenged the Sunni paramilitaries in recent months as it grows increasingly confident about its fledgling army.

“We want to have our cake and eat it too, support Maliki and the Sons of Iraq. . . . Maliki wants to make that as hard for us as possible. He wants us to choose him,” said Stephen Biddle, a Council on Foreign Relations defense expert who has served as an advisor on strategy to Army Gen. David H. Petraeus, the U.S. commander in Iraq. “What it looks like we are getting is a Maliki government that won’t behave itself and wants to crush the Sons of Iraq.”

The chief U.S. military spokesman here denied Maliki was targeting the Sons of Iraq, or that the Americans were tilting toward the government at the expense of the Sunni fighters.

“Just last week, the prime minister gave his personal commitment to the program,” Brig. Gen. David Perkins said. “They are well aware of the sacrifices the Sons of Iraq have made, that they were a critical element in bringing the security situation under control and that it is in their strategic advantage to assimilate them peacefully and orderly into Iraqi society.”

Maliki has grown powerful after successful military operations in spring against Shiite cleric Muqtada Sadr’s militia in southern Iraq and Baghdad. His transformation has provided the Americans a partner they can work with as they look for a way to hand over the reins in Iraq, the long-term U.S. goal here.

A Western advisor to the Iraqi government said the U.S. military couldn’t stop the Iraqi security forces now even if it wanted to — they are larger in size and have their own chain of command.

The Iraqi government first challenged the U.S. military over the Sons of Iraq program in the spring — basically freezing the activities of the Iraqi reconciliation committee charged with integrating the 99,000 fighters into the security forces and civilian jobs, according to a Shiite advisor to the government.

In July, Maliki informed the Americans that he wanted the entire program handed over to him as soon as possible, said Mohammed Salman, the head of the committee. In response, the U.S. military has drafted plans to dissolve the group by next summer, integrating 20% of its members into the police and finding the rest such jobs as mechanics, electricians and carpenters. The Americans want to slash the Sons of Iraq to 60,000 by the end of the year.

“Our goal is that by June 2009, the Sons of Iraq are out of business,” said Lt. Col. Jeffrey Kulmayer, who is charged with the Sunni paramilitary file.

Just over 9,000 of the Sunni fighters have been hired into the security forces so far. And the government has warned that any program to provide the majority of the fighters job training once their paramilitary units are disbanded will be temporary.

“We have the same problems around the country. We can’t just create a program to pay some people and not others,” said Abadi, the lawmaker.

Such comments raise concerns in U.S. military circles that the men will be pushed back to joining dwindling militant groups such as Al Qaeda in Iraq.

“If the government of Iraq doesn’t decide to employ all of them, you have jobless rates that skyrocket,” said a U.S. intelligence analyst who, like some others who spoke for this report, did so on condition of anonymity. “I don’t know what will happen.”

Many of the fighters are now on the run. The Iraqi military has mostly dismantled the group in the Baghdad suburb of Abu Ghraib, once a hub for militant attacks, and it has arrested Sunni fighters in Baqubah, 35 miles northeast of the capital. Influential Sunni paramilitary leaders, from the Baghdad and Baqubah areas, have gone into hiding or are in exile.

In the past, U.S. commanders had deflected arrest warrants for key fighters, but there has been an apparent shift. “We don’t have a ‘get out of jail free’ card for the Sons of Iraq. There is law and order in this country, and we respect the Iraqi government,” Kulmayer said.

The men feel increasingly vulnerable — they have been attacked by Al Qaeda and Shiite militias and subjected to Iraqi army raids. Since January, 462 of them have been killed in attacks by militants. If disbanded, their leaders warn, the men could revolt, but the Sons of Iraq are holding out hope that local elections, still without a date, will improve their lot.

“In the event that the U.S. military and government don’t live up to their promises, it could turn back to a violent form of resistance,” said a leader, Abu Abed, from the north Baghdad neighborhood of Adhamiya. “Every action breeds a reaction.”

Read the rest of it here. / Los Angeles Times

This entry was posted in RagBlog and tagged Iraq, U.S. Military. Bookmark the permalink.