Are Civilian Casualties in Gaza Higher Than Stated? 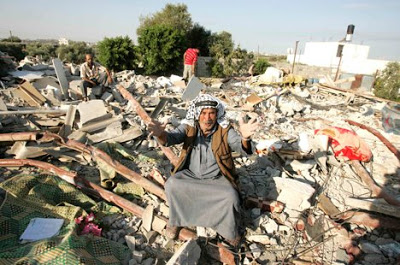 See video of Norwegian doctor describing conditions in Gaza below.

Is the UN Complicit in Israel’s Massacre in Gaza?
By Omar Barghouti / January 02, 2009

A friend forwarded to me the most original greeting for the New Year: “I wish in 2009 a horrible year for all war criminals and their accomplices.” I could not but think of whether some UN officials can be counted among such “accomplices.”

Over the last two days, various UN officials stated that the percentage of civilians among those Palestinians killed in the current Israeli war of aggression on Gaza is about “25%” and is “likely to increase.” Assuming the best of intentions, stating such a painfully low figure reflects shabby research or scandalous incompetence. At worst, it reveals intentional deception and misinformation that can only benefit the already massive and well-oiled Israeli PR machine.

The United Nations’ complicity in Israel’s propaganda war is the latest, albeit hardly ever mentioned, dimension of the international organization’s utter failure in defending its principles, foremost among which are the prevention of war and the promotion of peace, when performing such a duty is expected to stir the wrath of the US master and the uniquely influential Israel lobby. Not only has the UN General Secretary betrayed the very Charter of the UN and all relevant international law principles by failing to even condemn Israel’s massacre of civilians and targeting of civilian institutions and residential neighborhoods; the entire UN system has so far dealt with it as a “war” between two relatively symmetric forces, where the mightier side has sufficient justification to “defend itself,” but should do so more proportionately, while the weaker side is chiefly responsible for triggering the “armed conflict.”

Now, senior UN officials, excluding the particularly courageous and principled UN Special Rapporteur for human rights in the occupied Palestinian territory, Richard Falk, and a few others, are only focusing on “women and children” victims of the massacre, implying, even if unintentionally, that all Palestinian men in Gaza are fair game for the Israeli killing machine. The tens of Palestinian civilian policemen that were butchered in the opening hours of the massive Israeli attack by dozens of fighter jets were, thus, conveniently dismissed by such irresponsible UN figures of casualties as Hamas “fighters,” more or less, that may be targeted with impunity. This is not to mention the scores of male teachers, doctors, workers, farmers and unemployed who were killed by Israel’s indiscriminate bombing in their workplaces, public offices, homes or streets and were not accounted for as civilian victims of Israel’s belligerent murder spree.

Above everything else, this UN discourse not only reduces close to half a million Palestinian men in that wretched, tormented and occupied coastal strip to “militants,” radical “fighters,” or whatever other nouns in currency nowadays in the astoundingly, but characteristically, biased western media coverage of the Israel “war crimes and crimes against humanity” in Gaza, as some international law experts have described them; it also treats them as already condemned criminals that deserve the capital punishment Israel has meted out on them. I am not an expert on the history of the UN, but I suspect this sets a new low, a precedent in dehumanizing an entire adult male population in a region of “conflict,” thereby justifying their fatal targeting or, at least, silently condoning it. But this should surprise no one as the same UN leaders have for 18 months watched in eerie silence or even indirectly justified, one way or another, Israel’s siege of Gaza which was described by Falk as a “prelude to genocide” and compared by him to Nazi crimes.

If one wants to be truly magnanimous and give those UN officials the benefit of the doubt — not something I would recommend at all, given the scale of the massacre and their verifiable complicity — one has to assume that they are quite confused as to how best to categorize the thousands of Palestinian victims of Israel’s war on Gaza, whether those injured or killed. A casual overview of Israeli army press statements and human rights organizations’ reports, however, will immediately dismiss the possibility that the UN figure of 25% was the product of clinical incompetence or technical ineptness, widely recognized trademarks of the organization.

A recent article published in the Washington Post, for instance, quoted a senior Israeli military official saying: “There are many aspects to Hamas, and we are trying to hit the whole spectrum, because everything is connected and everything supports terrorism against Israel.” An Israeli army spokeswoman went further stating. “Anything affiliated with Hamas is a legitimate target.” Given that, in the ghetto of Gaza, Hamas is effectively the “ruling” party — it was democratically elected, after all — and its network of social and charitable organizations are the largest provider of social services to the impoverished and besieged population, all of Gaza’s civilian infrastructure, public schools, hospitals, universities, law and order organs, traffic police, sewage treatment and water purification stations, ministries providing vital services to the public, mosques, public theatres and many non-governmental institutions can technically be considered “affiliated” with Hamas.

Lest the reader feels that this is an exaggeration, today, in the first hours of the first day of the new year, the Israeli air force already bombed the following “targets” in Gaza: the Palestinian Legislative Council, the Ministry of Education and the Ministry of Justice. Earlier, several mosques were pulverised to the ground. So were main buildings in the Islamic University of Gaza, which serves 20,000 students. Ambulances and private homes were not spared either.

Even B’Tselem, Israel’s leading human rights organization that often issues sanitized, “balanced” or selective reports focusing on Israel’s less criminal behaviour in the OPT, was compelled to conclude that the Israeli army was intentionally targeting “what appear to be clear civilian objects” that are not “engaged in military action against Israel,” without making the distinction between male and female civilians. A statement from the organization on December 31st said:

For example, the military bombed the main police building in Gaza and killed, according to reports, forty-two Palestinians who were in a training course and were standing in formation at the time of the bombing. Participants in the course study first-aid, handling of public disturbances, human rights, public-safety exercises, and so forth. Following the course, the police officers are assigned to various arms of the police force in Gaza responsible for maintaining public order.

Another example is yesterday’s bombing of the government offices. These offices included the Ministry of Foreign Affairs and the Ministry of Labor, Construction and Housing. An announcement made by the IDF Spokesperson’s Office regarding this attack stated that, ‘the attack was carried out in response to the ongoing rocket and mortar-shell fire carried out by Hamas over Israeli territory, and in the framework of IDF operations to strike at Hamas governmental infrastructure and members active in the organization.’

Just to drive the point closer to home for an average western reader who may have internalized over the years a perception of Israelis — inaccurately and quite deliberately depicted by Israeli and western propaganda as part of the “west” — as full humans and Palestinians, along with almost all global southerners, as relative humans, perhaps the following mirroring exercise is necessary.

Imagine if the Palestinian resistance, in exercising its otherwise perfectly legitimate, UN-sanctioned right to fight Israel’s occupation and apartheid, were to regard all institutions “affiliated” with the Israeli government as legitimate targets, justifying the bombing of universities, hospitals, civilian ministries, publicly-run synagogues, neighborhoods where government or army officials live or work, and other civilian “targets,” killing in 5 days only 1,600 Israelis and wounding 8,000 (four times the current toll in Gaza, given that Israel’s population is four times as large). What would the UN do? Would UN officials only count Israeli women and children victims? Would they call on both parties to “exercise restraint” or to end “the violence”? Morally, and even legally, this is not even a fair reversal of roles, for Israel, no matter what, remains the occupier and settler-colonial oppressor, while the indigenous Palestinians remain the colonized and oppressed.

The truth is the UN leadership, in the unipolar world that we are still living in and is perhaps on its way to be transformed to more multipolar space, has effectively turned into a rubber stamp bureau for US dictates. Ban Ki-Moon will go down in history as the most subservient and morally unqualified general secretary to ever lead the international organization. The only question remaining is whether one day he and his senior staff will stand trial for being accomplices in Israel’s war crimes, together with leaders of the US, the EU and many Arab regimes. In a more just world, governed by the rule of law, not the US-dominated rule of the jungle, they should.

The Reality In Gaza