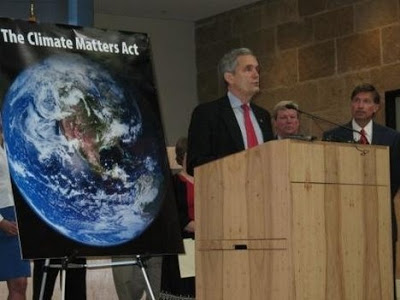 It’s over in the House.

The dog-pile of special interests, climbing all over each other to see whose cause benefited most, ended Friday, June 26, with a vote in the U.S. House on the American Clean Energy and Security Act (ACESA), which started life as the principled Waxman-Markey bill. What came out of the process is a veritable “Christmas tree” of giveaways, exemptions, federally-funded studies that lead to dead-ends, and lowered expectations. Gucci-gulch regulars connected to fossil fuels and big agriculture can rejoice, and afford a few more pairs of alligator shoes.

The American people on the other hand, should be wary. Yes, it’s possible, in the abstract, that the bill will be strengthened in the Senate — the house leadership’s promise to representatives who were reluctant to sign on because they feared the bill was too weak. It’s also possible the sun will rise in the West, in the abstract, and that clean coal, a concept not only pushed but well-funded in ACESA, will make the air around coal plants refreshingly minty. Truth is, the bill faces an uphill struggle in the Senate, and the opposition has declared that the percentage of carbon emissions cuts, already well below the minimum scientists say is needed to stand a chance of banishing climate change, must go lower still.

Austin’s own Lloyd Doggett led the fight to strengthen the bill in the House. His strategy, made known to a group of environmentalists who met with him three weeks ago in Schulenburg, was to hold out for a full debate — to delay the vote as long as possible, hoping that if the advocates of the present bill didn’t have the votes, they would be forced to include safeguards which he thought were necessary.

Doggett had written his own bill — the Safe Markets Act of 2009. In it, he made sure to address the blossoming derivatives market that he thought would emerge from the ACES bill — unregulated and on a clear-cut path to disaster. He also found fault with renewable energy standards, which he saw as too open to substitution with less-costly, less-effective means, at the whim of American governors. But primarily, he found the bill too weak to fulfill the minimum requirements that have been telegraphed to the United States as being necessary to hammer out an agreement in the U.N. Climate Change Conference to take place in Copenhagen later this year.

It wasn’t unreasonable for Doggett to assume that his opposition could make a crucial difference. After all — it was the holding-out of petroleum industry patron Gene Green of Baytown that resulted in so many provisions being inserted that would favor oil-and-gas, so why couldn’t one courageous environmentalist have the same effect?

But it was not to be. No one except Lloyd Doggett can say what pressure he was subjected to on Thursday and Friday as the votes were being tallied in back rooms, but everyone has seen the outcome. After giving an inspiring speech earlier about his “no” vote on the bill, he later changed his vote and weighed in with the Democratic majority, as a critical part of the 219-to-212 victory. It is known that his office was bombarded with phone calls, some of which apparently placed him in the same category as the climate deniers who made such fools of themselves before the camera on Friday.

A last-minute “manager’s mark-up” of the bill inserted a few, a very few, of the provisions that Doggett and others were pushing, but that would not have been enough to convince him to change his mind. It’s hard to imagine what kind of arm-twisting went on, but judging from the tired visage he presented on CSPAN late in the afternoon, it must have been substantial.

Perhaps this bill is a critical first step in the campaign to regulate greenhouse gases in the United States, and put this nation back in the global fight for a solution to climate change, but much more will have to be done to make certain that special interests do not eviscerate the provisions any further. And even then, the people of this nation will have to stand strong for real change, real efforts to rein in corporate interests, and real teeth in enforcement of the rules laid down.