The book traces author Steve Russell’s life from his dirt-poor
origins in Oklahoma. 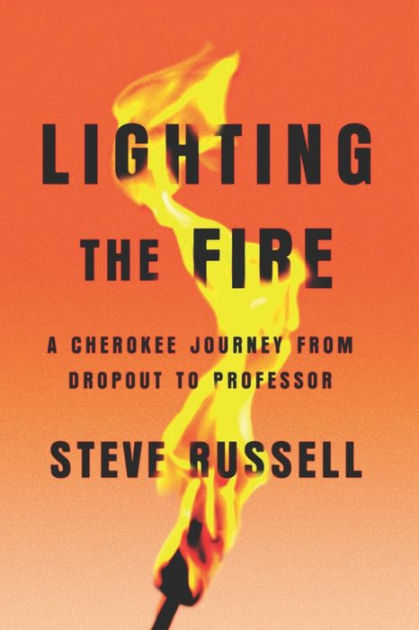 AUSTIN —Regular Rag Blog readers know Steve Russell as a witty and insightful commentator on current events with particular expertise in Indian affairs. Oh, and prolific as well. I tried to count his contributions to this fine platform and gave up at around 89 because I got tired of scrolling through pages and pages of them.

Russell wanted to be a writer from an early age, and has succeeded admirably. I know of his youthful ambition because I have just finished his memoir, Lighting the Fire. My objective in this review is to convince you to acquire and read it, for two reasons: 1.) I expect you will thoroughly enjoy it, as I have; and 2.) it is an inspiring testament to grit, determination, character, and the power of love, compassion, and community.

It’s a series of stories, and boy, can Steve
Russell tell stories.

The book traces Russell’s life from his dirt-poor origins in Oklahoma through a varied career as paperboy, musician, high-school dropout, airman, data processing operator, student, lawyer, judge, and finally, professor of criminal justice, with writer liberally interspersed throughout. It’s not a full autobiography; lots of details are left out. Instead, it’s a series of stories; and boy, can Russell tell stories!

Mistreatment as a young Indian boy; disappointment (to put it mildly) on a trip to see his estranged father; sexual initiation in Mexico with his mother’s boyfriend; an almost-fatal car accident; wide-eyed wonder at an intellectual party enhanced by lots of pot; honing his skills as a writer and scut worker at the noted underground newspaper, The Rag; talking his way into admittance to the University of Texas despite lacking a high school diploma; encouraging students to read by giving them pornographic novels; choking on tear gas at the Texas State Capitol; utter despair at the death of his wife followed by consolation at an Indian medicine wheel; mystical communication from bright red cardinals — the stories go on and on.

Russell is a master of wry understatement and succinct commentary. I read a few chapters to my wife, and we both burst out laughing (and occasionally crying) more than once. (This is a great book to read aloud, by the way.) Many of Steve’s remarks are just out-and-out hoots. Here are a few examples.

At age twelve or so, big for his age, he gets approached to play football. “I was happy to be invited to football practice, partially because football is the established religion of Oklahoma and Texas…”

‘I quickly learned that I had grown up with a
limited notion of bizarre.’

Introduced to a fundamentalist cult during a brief stay with his estranged father, he says, “I quickly learned that I had grown up with a limited notion of bizarre.”

During the days of protests against the Vietnam War, he gets arrested for the third or fourth time. “The arresting officers put me in a holding cell and told me to drop my pants and ‘spread em.’ And what would I have secreted up my ass while in the police car? I invited them to come in to the holding cell and make me, but they declined the invitation, as expected.”

A number of themes recur throughout the book, among them motorcycles, cars, dogs, musical instruments, romance, sex, and social justice. And overcoming adversity in the form of low expectations and racist stereotypes. Contrary to stereotypical opinions of Indians at the time, he is about as far from shiftless, lazy, and dumb as a person could possibly be. Nor is he, as his father complained, unmanly and “useless as teats on a boar hog.” That phrase occurs more than once in the book, and one gets the impression that the effort to prove his father wrong has been a driving force in his life.

College and writing were his ambitions.

College and writing were his ambitions, drilled into him by the grandparents who raised him after his father disappeared and his mother couldn’t handle him. At the time, none of them knew quite what college was all about except that it was a ticket to a better life, and none of them knew how to attain that lofty goal, having no money and no experience in the matter. It took a lot of scrimping and saving, a fair amount of fast talking, and many hours of concentrated study finally to meet his goal of graduation. It helps that he is wicked smart.

Other driving forces in his life were family and Cherokee culture. It’s difficult to overstate the effect his grandparents had on him. Strapped for money, they nevertheless found enough for anything he wanted so long as it was for school. His grandmother nurtured him, consoled him, taught him to read, and told him over and over again that he was smart and could go to college. His mother would come and go, but his mother’s parents were there for him unconditionally, so much so that later in life he took their last name rather than his father’s.

Cherokee culture and the culture of other tribes pop up throughout the book. Cherokee by birth, Russell was raised in Muscogee (Creek) territory and had lots of contact with other tribes. Customs differed, but there was something shared among tribes — perhaps a feeling of solidarity that comes from mutual oppression, perhaps an acquaintance with the Spirit that moves in all things, perhaps both — that allowed him not only to appreciate but to participate and be welcome in others’ observances.

Case in point: the reconstruction of an abandoned medicine wheel on Fort Hood property in Killeen. “My people are not of the Plains,” he says, “and we did not build medicine wheels, but we would keep a medicine wheel from harm because it is sacred to other peoples.”

The Indian cultures are a welcome and healing contrast to the ills of modern industrial civilization.

The Indian cultures are a welcome and healing contrast to the ills of modern industrial civilization. The image of sacred fire both opens and closes the book. The people of the Cherokee nation have kept a fire burning from time immemorial to the present, a potent symbol of survival in the face of steep odds. Russell wants his story to show that “indigenous blood is a blessing if you reject the spirit-killing garbage we all had to traverse on the journey to discovering our inherent value.”

Russell’s inherent value shines through every page of this book. Of course his work for social justice, rooted in the oppression he and his ancestors have had to endure and aided by discontented white students, is admirable. But it’s not big, public actions and pronouncements that show it the most, it’s little things.

Newly married, he and his wife rescue his baby nephew from an abusive half-brother in San Antonio and adopt and raise that child as their own. After years of neglecting her child and now in her old age, his mother needs care, and Russell takes her in. After his first wife has supported him through graduate school, it’s his turn to support her, but they are breaking up. Nevertheless, he provides the financial resources she requires.

If I didn’t know Russell’s disdain for “monotheistic patriarchal desert cults,” I would call these actions fine examples of Christian charity. I guess they are fine examples of Cherokee charity, but it’s clear that being a decent human being transcends religion and culture. Russell is more than just decent. Aristotle would call him a man of great soul. That greatness burns brightly throughout Lighting The Fire.

Lighting the Fire is available on Amazon. If you would like a copy signed by the author, send your mailing address and $25 to 127 Blazing Star Drive, Georgetown, Texas 78633. Or send $25 on Facebook Messenger to Steve Russell with instructions on where to mail it.

[Bill Meacham, PhD, is an independent scholar in philosophy and the author of the books How To Be An Excellent Human and How to Exert Free Will as well as numerous essays on philosophical topics as applied to everyday life. A former member of the Ragstaff back when The Rag was a print publication, he now ponders the deep questions posed by philosophy: What’s real? How do we know what’s real? And what shall we do about what’s real? His work is available on his website.]

9 Responses to Bill Meacham, PhD :
BOOKS | Lighting the Fire: A Cherokee Journey from
Dropout to Professor