Blackwater Is Staying in Iraq, Against Iraqi Wishes 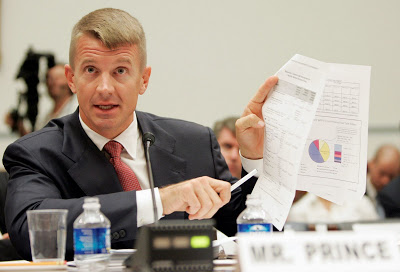 Days after the Baghdad government decided it no longer wanted the company then known as Blackwater in Iraq, the State Department signed a $22.2 million deal in February to keep the embattled contractor working there through most of the summer, contract records show.

The decision keeps Blackwater – since renamed Xe – in Iraq months longer than anyone has suggested publicly, while raising questions about why the U.S. would pay a contractor for work in Iraq if it may not be able to operate there legally.

The State Department has been under pressure from Blackwater critics, including several in Congress, not to renew the company’s contracts in Iraq. Much of the concern stems from a 2007 incident that left 14 Iraqi civilians dead and six former Blackwater guards facing manslaughter charges. One of the guards pleaded guilty, but the company was accused of no wrongdoing in the incident.

In late January, the Iraqi government said it would not renew Blackwater’s operating license and that the company would have to leave as soon as a joint Iraqi-U.S. committee completes its work on guidelines for the operation of private security companies. State Department officials said they would honor the decision.

On Feb. 2, a department spokesman was asked whether officials planned to renew one of Blackwater’s contracts past May. The spokesman, Robert Wood, said the department had told Blackwater “we did not plan to renew the company’s existing task force orders for protective security details in Iraq.”

But records available through a federal procurement database show that on that same day, the State Department approved a $22.2 million contract modification for Blackwater “security personnel” in Iraq, with a job completion date of Sept. 3, 2009.

“Why would you continue to use Blackwater when the Iraqi government has banned the highly controversial company and there are other choices?” asked Melanie Sloan, executive director of the nonpartisan Citizens for Responsibility and Ethics in Washington.

State Department spokesman Noel Clay said the contract modification involves aviation services. “The place of performance is Iraq, but it is totally different than the Baghdad one that expires in May,” he said.

Ms. Sloan called the State Department’s explanation of the Feb. 2 deal a “parsing of words” and said “they should just be straight with us.”

Xe spokeswoman Anne Tyrell declined to comment on the status of the company’s work in Iraq or the Feb. 2 contract modification. She said the company was aware that the State Department had indicated that it did not plan to renew its contracts in Iraq but that Xe officials had not received specific information about leaving the country.

“We’re following their direction,” she said.

The Iraqi Embassy in Washington had no comment on the Blackwater contract when contacted on Monday.

The State Department has given clear indications for months that the Iraqi government might not be renewing Blackwater’s operating license.

Harold W. Geisel, the State Department’s inspector general, told the congressionally mandated Commission on Wartime Contracting at a Feb. 2 hearing that officials were awaiting the outcome of an FBI report into the 2007 shooting incident before deciding whether to keep Blackwater in Iraq.

“The issue is not only one of, well, what we would like to do, but it also is to some extent what the department can do,” Mr. Geisel said of decisions about the future of Blackwater’s role in Iraq, according to a transcript of the hearing.

“Blackwater had certain assets that the department determined the other contractors did not have,” he said, citing the company’s 24 aircraft as an example.

Nonetheless, Mr. Geisel said his office did “advise the department that they better start planning for when the Iraqis say this is it with Blackwater. And without getting into diplomatic negotiations, I believe the department is planning for this eventuality, which is clearly not too far off.”

“This case highlights the fact that the U.S. government over-relies on contractors and that it isn’t in a position to hold them accountable,” he said. “Continuing to do new business with questionable actors flies in the face of spreading trust, peace and democracy around the world.”

The contractor, based in North Carolina, recently underwent a big shake-up. The company changed its name to Xe, pronounced “zee,” last month. Also, a subsidiary, Blackwater Lodge and Training Center, which secured the State Department’s $22.2 million contract modification, was renamed.

Mr. Prince has donated nearly a quarter-million dollars over the years to political causes. More than half of the donations went to the National Republican Congressional Committee and the Republican National Committee, according to a 2007 Democrat-led House committee report, citing data from the nonpartisan Center for Responsive Politics.

Blackwater also had spent hundreds of thousands of dollars lobbying Congress, according to Senate records. It contributed between $10,001 and $25,000 to former President Bill Clinton’s charitable foundation. Mr. Clinton released the donor information last year to avoid conflict-of-interest questions about his fundraising activities and the duties of his wife, Hillary Rodham Clinton, as President Obama’s secretary of state.

Despite any political good will that the company might have generated from its lobbying and political activities, it was unable to dodge fallout from the Sept. 16, 2007, shooting incident in Baghdad, in which prosecutors said six former guards went on an unprovoked rampage, shooting innocent Iraqi civilians.