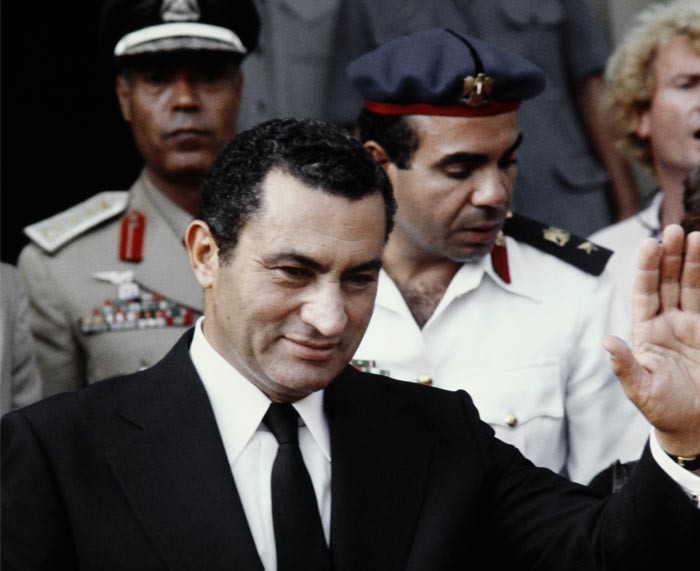 Mubarak after assassination attempt in Ethiopia, June 26, 1995. Photo from AFP.

As Jason Thompson’s A History of Egypt recalled, the Mubarak regime mostly tolerated the Muslim Brotherhood between 1981 and 1991, but in 1993 it “launched a major assault on the organization, denouncing it as “illegal,” and accusing it of having “ties to extremist groups” responsible for violently opposing the Mubarak regime; and “hundreds of suspects” were then “jailed and tried in military courts after successive rounds of arrests.”

As James Gelvin observed in The Arab Uprising: What Everyone Needs To Know:

The Egyptian Muslim Brotherhood was formed in 1928. Its last confirmed use of violence was in 1948 when its “secret apparatus” assassinated the Egyptian prime minister who had ordered the organization dissolved… After years of repression, the “supreme guide” of the brotherhood renounced violence altogether in 1972, and his successor renewed the pledge in 1987.

According to the same book:

In Egypt it was groups splintering off from the Egyptian Muslim Brotherhood or unaffiliated with the brotherhood that perpetrated the violence… The government responded to Islamist violence with heavy-handed repression. In the wake of the assassination of President Anwar al-Sadat, for example, the Egyptian government imposed an emergency law that entitled the state to restrict freedom of assembly, arrest and detain suspects without warrant, monitor and censor publications, establish exceptional courts to try those accused of violating presidential decrees…

According to a 1994 article about Egypt by Chris Harman, “20,000 troops with tanks and armoured cars” occupied “slum areas in Cairo, such as Imbaba,” in 1993, and “tens of thousands were arrested.” In addition, “death squads set out to kill those activists who escaped,” the “main mosques used by the radical Islamists were blocked with concrete,” and “parents, children and wives of activists were arrested and tortured,” according to the same 1994 article.

During the subsequent 1990s conflict between militant Islamic splinter groups in Egypt and the Mubarak regime, “over 1,200 people were killed, 10,000 wounded and scores of thousands detained under the emergency laws,” according to The Rough Guide To Egypt. In 2010 the same book also described in the following way the political and economic system that existed in Egypt under Mubarak’s U.S. government-backed regime between 1981 and early 2011:

Mubarak’s regime has long been a thinly-disguised military dictatorship allied to an oligarchy. Ex-military and police officers hold top jobs in civilian life; the army is a profit-making entity (owning farms, factories and construction businesses using conscript labour); and senior officials and wealthy entrepreneurs (often from the “Menoufi Mafia” promoted from the Delta governorate where Sadat and Mubarak were born) collude in a web of mutual corruption. Most Egyptians refer to the ruling elite as the “band of thieves”…

In addition, according to A History of Egypt, “the parliamentary elections of 1995” in Egypt “were particularly notorious for fraud and violence”; and in Egypt’s November 2000 elections, “Muslim Brotherhood candidates and supporters were hindered and harassed, and even physically blocked from entering polling stations.” The same book also indicated how the economic situation of most people in Egypt worsened under the Mubarak regime during the 1990s:

According to international standards, the percentage of the Egyptian population living in poverty increased from 20-25 percent in 1990 to more than 45 percent in 1997. The real wages of most workers have steadily declined over the past several decades. Unemployment has risen sharply, with published figures running between 9 and 10 percent, but those are underreported and almost certainly should be adjusted upward by at least an additional 5 percent.

The direness of the situation is further masked by widespread underemployment and low wages, compelling many individuals to find supplementary work and even full-time second jobs in order to support their families… Food prices have increased to distressing levels…