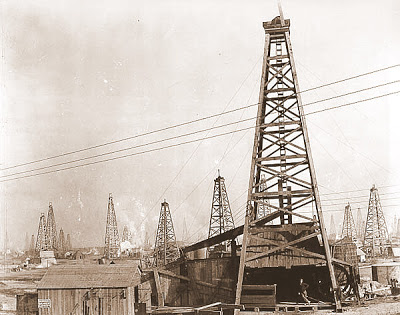 Burkburnett oil field, Burkburnett, Texas, circa 1920. Image from Texas in the 1920s.
The hidden history of Texas

[This is the second section of Part 10 of Bob Feldman’s Rag Blog series on the hidden history of Texas.]

In 1920 over 741,000 African-Americans lived in Texas. But given the level of KKK influence in Texas and the limited political and economic opportunities that white supremacist and institutionally racist Texas society generally provided most African-Americans between 1920 and 1930, “a good many African-Americans,” not surprisingly, “left the state in the 1920s,” according to Randolph Campbell’s Gone To Texas.

Although the number of African-Americans who worked for wages as farm laborers in Texas decreased from 75,000 to 41,000 between 1910 and 1930 (due, in part, to the increasing mechanization of agricultural work), 20,000 African-Americans in Texas still owned their own farms (on which most grew cotton) in 1930.

Most workers in Texas — whether white, African-American, or of Mexican descent — who attempted to organize themselves into unions were apparently exploited or repressed between 1920 and 1930 by the white corporate power structure in Texas. As F. Ray Marshall’s Labor in the South recalled:

The anti-union campaign was particularly vigorous in Texas. In San Antonio, for example, the chamber of commerce ran a free employment agency which placed over 2,000 non-union workers in 1920, by which time it had become almost impossible for union carpenters to get jobs. Mexican workers were brought in by the thousands, and special schools were set up to train non-union workers.

In San Antonio, the program defeated union electricians, carpenters, planning mill operators, butchers, printers and others. Beaumont, which had been a strong union town, became almost “open shop” after the anti-union attacks led by a member of the National Metal Trades Association. The anti-union forces in Dallas imported 1,500 strikebreakers, and even the printers were forced to accept non-union conditions. The Southwest Open Shop Association opened a trade school at Dallas to supply workers and persuaded the governor to send militia to Galveston to break the 1920 longshoremen’s strike.

But although “the ILA locals at Galveston surrendered their chapter in 1922, and company union was chartered in 1924” (and miners in Texas also “lost a 1926 strike against a 25 percent wage cut, and the United Mine Workers [then] disappeared” from Texas), “the open-shop movement” during the Roaring Twenties “was not completely successful, however, because the unions at Fort Worth and Houston were able to survive,” according to the same book.

Although most Texas farmers and workers in Texas did not enjoy much economic prosperity between 1920 and 1930, by 1928, “Texas for the first time led all other states in oil production with… nearly 20 percent of the total for the entire world,” according to Gone To Texas.

Besides producing super-profits for out-of-state, eastern corporate interests like the Mellon family and for some local Texas businessmen, politicians, and investors, Texas’s booming oil industry in the 1920s also began to produce super-profits for the “non-profit” University of Texas in Austin (a university that still discriminated against African-American people in the 1920s). As the same book observed:

Development of the Permian Basin… made the University of Texas… rich. The two million acres of land donated to the Permanent University Fund [PUF] in the 19th century had generated little income… But then in 1923 drillers brought in the Santa Rita wells on university lands in Reagan County…

Yet, although Austin’s “non-profit” University of Texas began to accumulate a lot of surplus wealth from its Texas oil industry property by 1927, in 1930 about 25 percent of Austin homes still had no indoor toilets, tubs, or showers, according to the same book.