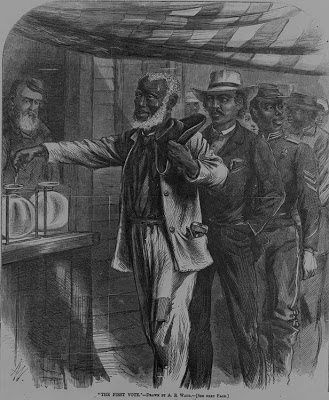 African-Americans voting in 1867. Image from the Texas Liberal.
The hidden history of Texas

[This is the second section of Part 7 of Bob Feldman’s Rag Blog series on the hidden history of Texas.]

According to Alwyn Barr’s Black Texans, after the Civil War “the vast majority of ex-slaves” in Texas “settled down to become sharecroppers or tenant farmers” by 1870, and only “a few had saved enough to buy their own farms.” Yet by 1870 a significant proportion of the residents in urban Texas cities like Galveston, San Antonio, Houston, and Austin were also now African-American.

And, as David Humphrey’s Austin: An Illustrated History observed, “while the number of whites in Austin increased by only 12 percent during the 1860s, the number of blacks grew more than 60 percent as hundreds of former slaves migrated to town in search of opportunity;” and by 1870 “three out of eight Austinites were black.”

According to F.Ray Marshall’s Labor in the South, “the first Texas longshoremen’s union was formed in 1866 and received a state charter of incorporation as the Galveston Screwman’s Benevolent Association [GSBA].” Its membership was “about one-third German, one-third Irish, and one-third native whites…” “It had 60 members shortly after its formation,” and by 1875, “the organization was strong enough to enforce the closed shop” on the docks.

But, “in 1869 the organization adopted a resolution not to work for anyone `who shall employ to work on shipboard persons of color.’” In response to the racism of the GSBA (which excluded black longshoremen), in 1870 the African-American longshoremen organized themselves into the Negro Longshoremen’s Benevolent Association, which “restricted its activities to the docks, while the GSBA worked aboard ship,” according to the same book.

A few months before, in December 1869, according to Black Texans, African-American workers in Texas had also sent delegates to the National Labor Convention of Colored Men, and in 1871, the National Labor Union (Colored) established a branch in Houston.

Although “the Laborers Union Association of the State of Texas invited white and black workers to its meeting at Houston in June 1871,” according to Black Texans, “only a few integrated or black unions could be counted among the limited number of weak unions which existed in Texas during Reconstruction.”

The same book also recalled that “as a result of Freedmen’s Bureau schools of the late 1860’s and the public school system instituted by the Republicans in the early 1870s” in Texas, the percentage of former slaves over 10 years of age who were illiterate decreased from 95 to 75 percent between 1865 and 1880. And, “to allow themselves greater control of local political, economic and social life away from constant white domination,” African-Americans in Texas during the late 1860s and the 1870s also began to create “at least 39 separate communities in 15 Texas counties at different times.”