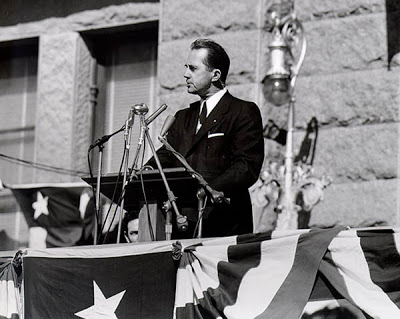 After a 1953 CIO-led strike in Port Arthur, Texas Gov. Allan Shivers, here shown addressing a campaign rally in Austin, led a move to make membership in the Communist Party illegal. Image from AlternativeHistory.com.
The hidden history of Texas

[This is the first section of Part 12 of Bob Feldman’s Rag Blog series on the hidden history of Texas.]

Membership expansion occurred in petroleum refining, and in the Dallas-Fort Worth area, where, in 1945, the CIO claimed 25,000 new members in one year. Important victories there included the organization of the huge North American Aviation Company to the UAW, the Armour plant by the packinghouse workers, Conroe Manufacturing by the ACWA, and several steel fabricators by the steelworkers. PWOC Local 54 and storehandlers’ Local 59 acquired bargaining rights under a master agreement with Armour. During the war [World War II], the packinghouse workers’ strength in Texas was confined largely to this plant.

By the 1942 convention, the oil workers’ organization committee had achieved significant results. The most important victory was the Texas Company at Port Arthur… In March 1942, the OWIU won an election at the Southport refinery in Texas City… It also signed up 84 percent of the workers at Standard of New Jersey’s Humble refinery at Baytown, Texas…

The UCAPAWA (Canning, Agricultural, Packing and Allied Workers)’s strongest base in Texas was in Houston, where it had 5 contracts covering over 600 Negro and Mexican-American workers, organized by March 1942. UCAPAWA contracts in Houston covered about 150 employees at the Houston Millinery Company and 400 Negro and Spanish-speaking workers in 4 cotton companies, three of which were owned by the Anderson Clayton company… In addition, UCAPAWA had locals among pecan workers at San Antonio, spinach workers at Mathis, and cannery workers at Sugarland…UCAPAWA…organized fruit and vegetable workers in the Rio Grande Valley of Texas, where its contracts covered 1,000 employees during peak seasons.

As Randolph Campbell’s Gone To Texas observed, “under the auspices of the National War Labor Board,” Texas labor movement “organizers unionized more of the state’s industries by 1945…” And during World War II, “workers at Shell in Pasadena, Texas” even “struck spontaneously” in June 1943 “to secure the reinstatement of a discharged union member,” according to Labor in the South; and there was also a strike by workers at a B.F. Goodrich plant in Texas in February 1944.

The white corporate power structure in Texas (and its ultra-conservative, white supremacist Texas political establishment in Austin) apparently then began to feel that this growing militancy and level of unionization of workers in Texas threatened both its class interests and its ability to continue to economically exploit and politically dominate most people who lived in Texas.

So after the CIO organized plant after plant across Texas in 1946-47,” the Texas “legislature responded in early 1947 by passing a right-to-work law that prohibited requiring union membership as a condition of employment,” according to Gone To Texas, and “the legislature also passed other anti-union laws, including one that prohibited pickets at strikes from being within 50 feet of each other or the entrance of the plant being picketed.”

Public employees in Texas were also denied the right to bargain collectively in 1947. And following a 1953 CIO-led strike in Port Arthur, the then-Democratic Texas Governor Allan Shivers even “called a special session of the legislature in the spring of 1954, which passed a bill making membership in the Communist Party a felony punishable by a fine of $20,000 and 20 years in the penitentiary,” according to the same book.

The public did not know about an even more significant business convert to Johnson, anti-union contractor Herman Brown who, with his brother George, ran the contracting and engineering firm of Brown & Root… A stream of gifts from the Browns to the Johnsons can be traced through the decade starting in 1940… Lyndon was Brown & Root’s kept politician…

By 1947 Brown & Root was so powerful in Texas it led a many-aspected campaign against unions which made Texas one of the most anti-union states in the Union and the only major industrial state that had a law prohibiting workers from voting to be all-union… The Brown brothers were largely responsible for the enactment from 1947 on, of the state’s anti-union laws.

War Department or Department of Defense contractors like Brown & Root apparently made a lot of money during World War II and the Korean War of the early 1950s from the U.S. government contracts that were thrown their way. But at the same time, “22,022 Texans died or suffered fatal wounds in battle” during World War II and “the Texas Division suffered one of the highest casualty rates of any in the Army — 3,717 killed, 12,685 wounded, and 3,064 missing in action,” according to Going To Texas.

In addition, “the 19th Division, a Texas unit… suffered nearly 18,500 casualties, including 2,963 killed, many of the deaths coming in close fighting in the hedgerow country of Normandy,” according to the same book. And around 1,800 people from Texas were also killed in action after the Democratic Truman Administration decided to intervene militarily on the side of the right-wing Syngman Rhee dictatorship during the civil war in Korea .

Of the 750,000 people from Texas who served in the U.S. military during World War II, about 88,000 were African-Americans from Texas and about 12,000 were women from Texas; and “Texas, which had 5 percent of the nation’s population, provided 7 percent of those who served,” with most Texans serving in the army and air force and “about one-quarter” serving in the navy, marines and coast guard, according to Going To Texas.