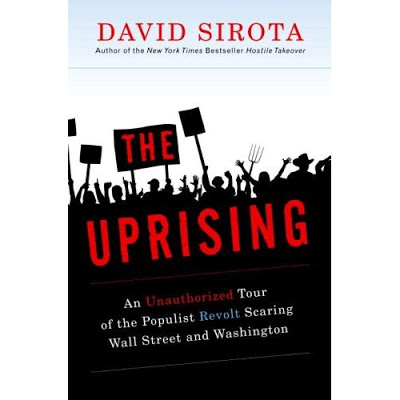 Sirota argues convincingly that the present moment, with its record-high levels of disenchantment with government, globalization, and politics-as-usual, is producing remarkable shifts in identity and activism across the country. The question he and his readers are left asking at the book’s end is whether these uprisings will coalesce into a movement for meaningful political change, or devolve into vicious paroxysms of xenophobia and anti-government backlash.

Many will be unhappy with Sirota’s book, and not just the CEO of ExxonMobil, Rex Tillerson, whom Sirota humiliated by uploading YouTube clips of him making “an evasive, Rumsfeldian ass out of himself on the subject of global warming.” (320) And not just Lou Dobbs, whose transformation into populist crusader, Sirota suggests, was “a mix of both principle and opportunism.” (193) Even mainstays of the progressive movement such as MoveOn feel the heat in The Uprising.

Sirota criticizes them both for having a relatively undemocratic internal structure and, more damningly, for pulling their punches against bad Democrats while trying to stop the war. Even more severe is Sirota’s criticism of AAEI, whom he blasts as partisan hacks more interested in ending Republicans’ careers than in ending the war in Iraq. AAEI, he says, “is fairly open about its desire to put on a smoke-and-mirrors show – and nothing more,” (61) using their substantial advertising budget to create the illusion of a coordinated grassroots antiwar effort, and then manipulating this image to attack Republicans. So while the group might promise to go for the throats of those responsible for starting and prolonging the war, Sirota says, “you can’t ‘go right at them’ if your uprising is led by a tightly knit consulting class that has dual loyalties and has been part of the problem from the outset.” (69)

What Sirota highlights throughout the book is the tension, and frequent contradiction, between playing the game of politics and actually solving problems. That tension haunts the Working Families Party in New York, whose use of laws allowing “fusion” voting (where a party can cross-endorse another party’s candidate, allowing voters to choose, say, Eliot Spitzer as governor using the WFP line) has enabled them to build an effective third party brand and organizational apparatus without running spoiler candidates that tip elections to Republicans. The WFP’s successes, however, brought dilemmas as leaders had to walk a fine line between sacrificing their ideals and building strong partnerships with Democrats like Spitzer. A similar dilemma confronted Jon Tester and other progressive Senators on the issue of whether to support a meaningless nonbinding Senate resolution condemning the war in Iraq.

These discussions touch on a deeply sensitive issue in American and progressive politics right now, which is that Democrats winning elections, particularly the presidential, will not on its own be enough to bring about meaningful change.

As Sirota argued on Colbert the other night, at best a politician might be a vehicle for the uprising, but never its culmination. And as Sirota and Naomi Klein argued on a panel at the Take Back America Conference this year, it is difficult to imagine real progressive change happening under an Obama administration if Obama marks the edge of acceptable left-leaning discourse in American politics; in other words, Obama may need to be challenged by a real leftist – a modern-day Huey Long, if you will – before he could become a modern-day FDR. Obama’s election, then, won’t defuse the uprising; in fact, it may put new wind in its sails. The disenchantment many Americans feel with Democrats after the disappointments of the current Congress should send a warning message to Obama and other Democratic leaders. Many voters have been willing to wait for Democrats to win the White House, but patience is not inexhaustible. If both parties continue to let Americans down, more and more may choose to join the uprising movements Sirota has brought to our attention.
One disappointing aspect of progressive politics that Sirota draws out, moreover, is that progressives have not achieved the level of coordination between our moderate and more radical wings in the ways that conservatives have. While Democrats, especially in the post-Vietnam era, have feared the influence of uprising politics over the party, Republicans have embraced it. Sirota notes that the GOP encourages primary challenges against moderate incumbents by movement conservatives in order to push incumbents rightward and maintain party unity, all while DLC-style Democrats have frantically attempted to cut down “uprising-minded candidates like Howard Dean and leaders like [Sherrod] Brown.” (138-9) The major challenge facing the progressive side of the uprising, then, will be how to engage with the “liberal Establishment” without being killed off or co-opted by it.

All this, I think, means that Sirota’s book leaves us with more questions than answers – a good thing, in my view, because those questions are the central ones of our current political moment. How long, and to what point, can progressives tolerate the shortcomings of the Democratic Party before they branch out to other alternatives? And, though Sirota leaves this question unspoken and merely implied, what good is electoral politics anyway? Perhaps the shareholder activists confronting Exxon on its own turf are the ones facing down the true powers that be, and perhaps the Minutemen who feel they “just need to DO something” are simply the first to tap into a feeling that awaits many more of us.

As Sirota says, it remains to be seen what the outcome of the uprising will be. Will we see new organizations, such as “an organization with the vast membership and internet savvy of a MoveOn that uses fusion voting to develop its own independent political machine like the Working Families Party, rather than playing Washington games in the media”? (337) I would probably rather vote for Barack Obama on that party’s ticket rather than as a mere Democrat. The possibilities offered by technology and plain old human creativity are breathtaking, but the lessons of history are daunting. The uprising activists of a hundred years ago and more gave us eight-hour work days, weekends, and protections over the food we eat – but at times it still feels like we’re stuck in the late nineteenth century, with big business pulling the strings to make our government dance. Sirota’s confidence in the ability of people, if given the chance, to make good decisions is one I share. The question is whether we will find a way to get there – to make our society, our movements, and our government more democratic, more responsive. The uprising has its work cut out for it.

It should be clear to Seminal readers that Sirota’s views closely parallel my own. For example, Sirota lays into the “walking stereotypes” at antiwar protests, and notes that antiwar protesters’

stunts are more likely to get television coverage, they are also more likely to get precisely the kind of circus-freak-show treatment that defeats the underlying purpose of event. If the goal is getting as many Americans as possible to join the uprising to end the war, then achieving that objective is not helped by garnering television coverage that depicts marchers, and thus the cause, as totally fringe and therefore culturally repellent to Middle America.

This kind of sentiment was the impetus for our experimentation with wearing suits to antiwar protests last fall, an initiative we dubbed Serious Change.

And like Sirota, I can sympathize with the efforts of third parties like the WFP, territory that would make many progressives uncomfortable. And hell, I can sympathize with all the manifestations of the uprising that he profiles. Some more than others, of course. But the disenchantment and frustration that runs through all of them has infected me too. I’m angry and I want problems solved.
To close, I’ll say that there are just a few areas where I would have liked to see Sirota go further. Perhaps most importantly, I would have liked to see more discussion of race. Issues of race and racism figure throughout the book, from Lou Dobbs to the Minutemen to the WFP, but as happens so often in American politics race is constantly slipping in and out of view, and rarely are we called to examine the phenomenon directly. The more I learn about American history, the more I feel that it is a history first and foremost of race relations, class relations reflected through prisms of race, and the exploitation of racism by politicians from the southern Democrats of old to Ronald Reagan and his Cadillac-driving welfare queen. I would have liked to see Sirota go further in discussing the ways in which discussions about race intersect with – or impede – discussions about social class.

And as a corollary, I would have liked him to include more nonwhite uprising movements in the book (aside from the WFP and perhaps the antiwar protesters, most of the groups he profiles are predominately white). Having been on a Dead Prez listening kick immediately prior to picking up Sirota’s book, I can say that white America isn’t the only place where an uprising is going on in our country.

These critiques aside, though, I strongly recommend The Uprising. This election cycle has produced a number of important books, but Sirota’s was the one I was most looking forward to reading. And I think that’s because while many others take up the important theme of how Democrats can win elections by being more courageous and better Democrats, Sirota moves to a deeper and more intriguing stratum of political life, showing that elections are just one aspect of a more profound struggle. In the whirlwind of politics, parts of the book have already become history: Spitzer is gone, and new uprisings (such as Ron Paul) have already arisen, and perhaps fallen, in the time since Sirota’s research was coming to a close. But the deeper sociological observations Sirota makes will be with us for some time, I suspect.

At a time when more and more uprisings will appear, thrive, and force change, this book will be a vital tool for anyone interested in American politics outside the narrow corridors of DC.

Find The Uprising on Amazon.com.

For all things Sirota.