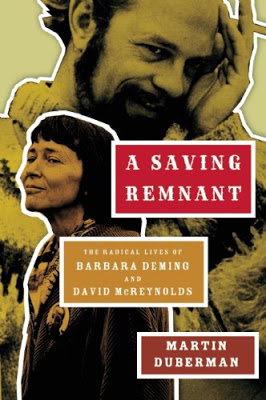 A Saving Remnant:
Two lives of courage and commitment

Barbara Deming and David McReynolds were ‘out’ pioneers of the left.

Martin Duberman, known as “the father of gay studies,” is a distinguished historian, playwright, essayist, novelist, and public intellectual, and any new book by him is an event in queer culture to which attention must be paid.

Such is certainly the case with A Saving Remnant: The Radical Lives of Barbara Deming and David McReynolds, an unusual dual biography by Duberman just published by the New Press.

Duberman is a distinguished professor of history emeritus at the Graduate Center of the City University of New York, where three decades ago he founded the Center for Lesbian and Gay Studies (CLAGS), the first such program in any American university, much emulated since. Duberman’s long struggle to establish that center is recounted in his third volume of memoirs, Waiting to Land, published two years ago (see this reporter’s October 15, 2009 review, “Queer Studies’ Essential Man.”)

Duberman first established his reputation as a historian with his groundbreaking work on the 19th-century anti-slavery movement, and later produced stunning biographies of Paul Robeson and Lincoln Kirstein, among others, a body of work that won him the recognition of his peers, who awarded him the American Historical Association’s Lifetime Achievement Award for Distinguished Scholarship.

Duberman was already well-known as an important public intellectual whose essays and articles engaged with “the passion and action of our time” (to borrow Oliver Wendell Holmes’ formulation), and as a prize-winning historian and playwright, when he became the first major intellectual of premier rank to come out and join the gay liberation movement in the early 1970s. As an activist, he went on to help found the National Gay and Lesbian Task Force and, later, Queers for Economic Justice.

With his new book, “A Saving Remnant,” Duberman returns to the preoccupation with social movements that has been at the heart of much of his work. And in choosing to recount the lives of Barbara Deming and David McReynolds [a contributor to The Rag Blog], Duberman has picked two openly queer Americans who devoted their lives to the struggles for peace and social justice. 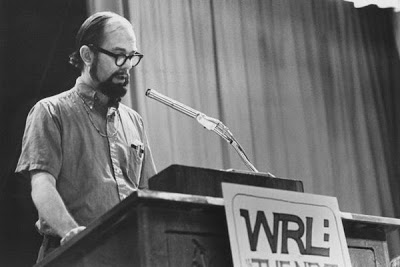 David McReynolds addresses a gathering of the War Resisters League, where, on the recommendation of Bayard Rustin, he worked late in his career, until his retirement in 1999. Photo from The New Press / Gay City News.
Nothing in their family backgrounds destined either Deming or McReynolds to become political radicals. Deming, a novelist, short story writer, and poet who was born in 1917 and died in 1984, was raised in Manhattan by upper-middle class parents with “traditional habits and opinions.” But at 16, she fell in love with her mother’s best friend (Edna St. Vincent Millay’s sister Norma) and boldly wrote in her journal, “I am a lesbian. I must face it.”

Thereafter, she refused to conceal her sexual orientation. After graduation from Bennington, Deming moved to Greenwich Village, worked at Orson Welles’ Mercury Theater, and had a brief affair with Lotte Lenya, the Austrian actress-singer who was married to composer Kurt Weill.

McReynolds, born in 1929 and still going strong today, was raised in Los Angeles as a devout Baptist by conservative Republican parents. But while in high school he read muckraker Lincoln Steffens’ autobiography and underwent a political conversion. McReynolds had his first homosexual experience in grammar school, and when he was 19 came out to his parents.

Although he had some guilt about his “deviance,” that vanished when he was a student at UCLA after an encounter in a notorious “queer bathroom” on campus with a young Alvin Ailey, not yet famous as a dancer and choreographer.

“Alvin’s guilt-free attitude toward homosexuality became a model for David (‘I came home walking on a cloud’) and the two became good friends, though never lovers,” Duberman recounts.

By this time, 1951, McReynolds had become deeply involved with the Socialist Party. Founded in 1901 under the leadership of labor leader Eugene Victor Debs, the party reached its peak of influence in 1912, when, with Debs as its presidential candidate, it won 6 percent of the vote; had 100 elected public officials, including several members of Congress; and a press with a readership in the millions.

But the party’s principled pacifism during World Wars I and II brought it government persecution and decimated its membership, and by the early ’50s the party, for decades led by Norman Thomas, was a shadow of its former self.

As a well-known, “outspoken and magnetic” campus radical “on the non-Communist side,” the handsome young McReynolds became a leader of the Socialists’ left wing, all while being open about his homosexuality with his party comrades in its somewhat Bohemian LA local, but “never taking any flack for it.”

McReynolds, already a committed pacifist, risked prison when he refused induction into the army for the Korean War, and it was then that he met Bayard Rustin, the field director of the principal pacifist organization, the War Resisters League, later famous as the organizer of the 1963 March on Washington under Martin Luther King’s leadership.

At the time of their meeting, Rustin had just been arrested on a “morals charge” for a homosexual encounter, and a long talk with Rustin about homosexuality helped further diminish any of McReynolds’ residual guilt feelings about his own same-sex orientation.

It is difficult to overstate the enormous courage and personal integrity required of Deming and McReynolds to be openly queer at a time in America when homosexuality was illegal, and homosexuals were condemned to barbaric tortures to “cure” them by medicine and loathed as degenerate outcasts by most of society.

This was especially true in the 1950s at the height of the McCarthyite witch-hunts, when government was purging both left-wingers and homosexuals from its ranks and those of academia and the labor movement, and when homosexuality was frequently identified with Communism in the dominant rhetoric of the red-baiters.

In 1955, McReynolds was fired from his job on account of being a “political security risk” and decided to move to New York where, with help from Rustin, he obtained a series of “movement” jobs (including a stint with the Brotherhood of Sleeping Car Porters, where he was the only white person in its Harlem headquarters) before joining Rustin on the staff of the War Resisters League, where he remained until his retirement in 1999.

Deming, while essentially liberal, had remained rather apolitical until the late ’50s, when on a trip to India she steeped herself in Gandhi’s writings and became a convert to his theory of nonviolence as the path to peace and change, eventually emerging as a leader of A.J. Muste’s Committee for NonViolent Action.

It was on her return to the U.S. from revolutionary Cuba that Deming began to put her body on the line and got arrested in a never-ending series of non-violent direct action struggles, both in the movement for black civil rights — she spent several harrowing months in jail in Albany, Georgia — and in the budding movement against nuclear weapons and for peace and disarmament.

As she later wrote of these militant actions, they “reverberated deeply a so-called ‘apolitical’ struggle I’d been waging on my own, in a lonely way up until then, as a woman and a lesbian: the struggle to claim my life as my own.” 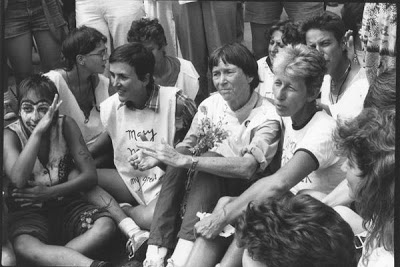 Barbara Deming (holding flowers) at the 1983 Seneca Women’s Encampment for Peace and Justice to protest the planned deployment of NATO first-strike missiles from the Seneca Army Depot. Image from The New Press / Gay City News.
Duberman writes, “Barbara would also come to believe that nonviolent actions are by their nature androgynous. Two impulses long identified as belonging to different genders — the ‘masculine’ impulse of self-assertion and the ‘feminine’ impulse of sympathy — come together in any individual, regardless of gender, who adheres to nonviolence.”

Duberman contrasts McReynolds’ focus from Deming’s, saying he “was no less committed than Barbara to nonviolence, but throughout most of the 1960s, until the rise of the feminist movement, he emphasized a somewhat though not absolutely different goal than she: his concern centered more on the need to transform social institutions than individuals.”

But the path of Deming and McReynolds increasingly crossed in their activism, as they participated in many of the same direct actions and causes. In the long struggle against the Vietnam War, McReynolds’ War Resisters League and the Committee for Non-Violent Action, in which Deming was a key figure, both played crucial roles.

A Silent Remnant recounts the history of all this activism with many details never before recorded. Deming left her extensive papers at Harvard’s Radcliffe Institute, and McReynolds not only has retained expansive personal files but is fortunately still around to add his personal illuminations to Duberman’s account of those years. The book is, as usual with this distinguished historian’s work, carefully footnoted, and includes several dozen photos of its principals and their activism.

There are chapters on the controversies over the U.S. New Left (including McReynolds’ debates about it with right-wing socialists like Irving Howe); on the burnout toll that activism takes on those who choose its demanding path (including McReynolds’ struggle with alcoholism and Deming’s eventually failed attempt to preserve her love affair of two decades with the artist and writer Mary Meigs); on the impact of the feminist and gay movements; and on the disagreements between the two sterling activists on such questions as pornography and patriarchy.

There are also fresh insights into the history of the Socialist Party and the debates and splits with which it has been riven over the last half-century. McReynolds went on to become the first openly gay presidential candidate as the Socialists’ standard-bearer twice, in 1980 and 2000.

Queers have always played an important role in all the movements for social justice and social change, and the lives of Deming and McReynolds are both eloquent testimony to that fact, but it has largely remained hidden history to heterosexuals on the left.

At the same time, as Duberman writes, “Radical gay people engaged with a wide variety of issues besides ‘gay liberation’ (like the continuing struggle against racial discrimination) do still exist in the gay community, but they lack the influence they once wielded in the half-dozen years after Stonewall.”

In A Saving Remnant, Duberman has given us an absorbing book, radiant with an emboldening and unquenchable humanity, that has meaningful lessons both for the left and for today’s single-issue gay activists.

Duberman notes, “I’m certain that my empathy, both political and personal, for both Barbara and David had a lot to do with my being drawn to write about them in the first place and may well have affected how I chose to narrate their lives. Although unsympathetic critics — especially those with a centrist or right-wing political bias — will perhaps accuse me of whitewashing my subjects, I’ve nevertheless done my best to recognize and record their foibles and shortcomings.”

That Duberman has succeeded in doing so renders this dual biography all the more meaningful and admirable.

[Doug Ireland is a longtime radical political journalist and media critic and an openly gay man. His work has appeared in many U.S. and French publications, including the New York Post (back in its liberal days), the Village Voice, New York magazine, The Nation, Bakchich, the Parisian daily Liberation, the LA Weekly, and Gay City News, the largest lesbian and gay weekly in New York City, where this article was first published.]