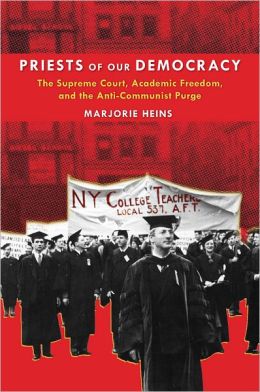 Priests of Our Democracy:
Marjorie Heins on Academic Freedom
and the Red Scare of the ’50s

“There were only a few exceptions to university collaboration in the Cold War heresy hunt.” — Marjorie Heins

In 1952, U.S. Supreme Court Justice Felix Frankfurter called teachers “the priests of our democracy” and noted that it was their special task “to foster those habits of open-mindedness and critical inquiry which alone make for responsible citizens.”

Frankfurter was an odd character, indeed, as Marjorie Heins shows in her fact-filled, balanced, and yet thought-provoking book about the battles for academic freedom that have been waged for decades in and out of classrooms, courtrooms, and in front of local and national investigating committees.

The battles go on; almost every week a book is banned by a school board somewhere in the U.S., though book bannings often don’t make it onto network news.

In an early chapter in which she profiles the members of the Supreme Court in the period after World War II, Heins chronicles Frankfurter’s epic journey from Austria, where he was born in 1894, to Ellis Island, the gateway to America, and from there to Harvard Law School and then to Washington, D.C. where he sat on the bench along with Hugo Black, once a Ku Klux Klan member, and William Douglas who came down on the side of the First Amendment and Freedom of Speech throughout his long judicial career.

It was an exceptional court by all accounts.

In 1952, when Frankfurter called teachers “priests,” priests were held in much higher esteem than they are today by the American public, and so were teachers. For the past 60 years, the church and academia have both lost much of the prestige and status that they once enjoyed in part because of scandals that have often involved sex and money. Remember Jerry Sandusky? Now, both academia and the church routinely go about cleaning their respective houses; they have to if they want to remain in business.

Once upon a time, teachers — including many that Heins writes about — believed that they were on a holy mission to foster “open-mindedness and critical inquiry.” Some of them were communists, others were pacifists, Quakers, Trotskyites, and plain old subversives.

They were often the best of teachers, so Heins suggests, and they were often the teachers most beloved by their students. But parents, politicians, and priests, too, viewed them with suspicion, accused them of heresy, disloyalty, and treason, along with minor crimes and misdemeanors.

Perhaps parents, priests in the Catholic Church, and virulently anti-communist politicians were jealous of the genuine bonds that existed between teachers and pupils and felt that they had to destroy them. Far more than ideology was at work here; pettiness, pride, and ego rose to the surface.

In the first nuclear age, The United States went berserk, though not everyone did, of course. Justice Douglas remained relatively sane and so did Justice Frankfurter. Their sanity is part of the picture that Heins paints. In the White House, Harry Truman lost his grip even as he tightened the screws; in 1945 he approved the dropping of atomic bombs on Japan, and in 1947 he made loyalty oaths obligatory for federal employees. The U.S. seemed to want to do what the Soviet Union had done under Stalin — “purge” anyone and everyone suspected of failing to worship the leader.

As Marjorie Heins — a long time civil liberties lawyer — shows Americans obsessed about loyalty and disloyalty in the era of President Harry Truman, Senator Joseph R. McCarthy, and a young California Congressman named Richard R. Nixon who made loyalty the name of the political game that catapulted him into the national spotlight.

Nixon, Truman, McCarthy, and dozens of local Nixon’s, Truman’s and McCarthy’s, demanded that the priests of the democracy prove their undying, unswerving fealty, and name the names of those whom they suspected of disloyalty — or whom they just didn’t like.

Heins writes about the activities of the House Un-American Activities Committee (HUAC) and those of the Rapp-Coudert Committee that operated in New York State and brought about the dismissal of outstanding teachers at City College of New York such as Philip Foner and his twin brother, Jack, both brilliant historians and both Old Lefties, though they were young lefties in the 1940s. Heins has a fondness for Old Lefties like the Foners and for the tireless lawyers of the Old Left such as Victor Rabinowitz and Leonard Boudin.

The historical period reeks with flamboyant characters and colorful cases. It has fascinated writers and scholars for decades, and no doubt will go on fascinating writers and scholars such as Heins who see it as a time that was put aside explicitly to hunt for heretics and then to purge them as unhealthy, unsavory, and un-American.

In Priests of Our Democracy, a suspenseful drama unfolds in which diabolical men persecute mostly good men and women, and in which the nine justices on the Supreme Court make momentous rulings that affect the lives of hundreds if not thousands of school teachers. Unfortunately, the justices were often too slow to act; they too were caught up in the hysteria of the period, and were cowed by politicians who were determined to root out so-called subversives. Political climate is a powerful thing, and Heins does an excellent job of mapping it.

To read this book is to live, or relive, the era of the Cold War, when American society as a whole reverted to the kind of Medieval thinking and acting that was prevalent during the fifteenth-century Spanish Inquisition. Indeed, historians such as Cedric Belfrage have called the phenomenon just that — “an Inquisition.” Hollywood screenwriter Dalton Trumbo labeled it “the time of the toad” and Columbia Professor Eric Bentley, a scholar of Berthold Brecht, borrowed from the language of the investigators themselves and counted it up as a disastrous “thirty years of treason.”

Others, such as playwright Arthur Miller — once Marilyn Monroe’s husband — likened it to a “witch-hunt” in his 1953 play The Crucible that lost him his career as a budding playwright for many years. Defending those accused of witchcraft and subversion was dangerous and guilt by association ruined many a career.

The virtue of Heins’s book is that it focuses on largely unknown, unsung teachers and librarians such as Harry Adler, Oscar Shaftel, Vera Shlakman, George Starbuck — who complained about “them damn loyalty oaths” — and Leon Josephson, an ex-communist and the lawyer for Harlem’s biracial nightclub, Café Society, where the likes of Billie Holiday and Lena Horne performed.

The Priests of Our Democracy mostly describes the anti-communist “crusade” (there’s another metaphor for you) that took place in and around New York in the 1950’s, and in and among the city’s Jewish population. Jews, many of them the sons and daughters of immigrants, tended to be union members and to believe in union solidarity.

Priests of Our Democracy also offers sections about earlier purges in American history — during the Civil War and the Red Scare of the 1920s — when politicians demanded absolutely loyalty from citizens. Then, too, crusades and inquisitions took place in other parts of the country, including New Hampshire and the State of Washington.

Heins is passionate about her subject, but levelheaded, too. She doesn’t romanticize communism, communists, the Old or the New Left of which she once was a part. Her research is compelling, the richness of the details absorbing, and the photos endearing. The index is excellent and the bibliography — which includes the pioneering work of Ellen Schrecker, author of No Ivory Tower: McCarthyism and the Universities — is helpful. Heins credits the work of pioneering authors in her field.

She points out the lingering affects of McCarthyism, the witch-hunts, and the purges — whatever you want to call them — on American culture as a whole. History, she understands, doesn’t move in a straight line and rarely follows the path of progress. “There were only a few exceptions to university collaboration in the Cold War heresy hunt,” she writes in a chapter she calls “The Laughing Stock of Europe.”

In her conclusion, she describes what she calls “the continuing vacuum in American political discourse” which she attributes to the purges, investigating committees, betrayals, and punishments. American teachers, Heins shows, paid a heavy price if and when they refused to play the game of conformity. Booted out of academia, they scrambled to survive at all kinds of jobs.

They were also, she points out, a resilient and a resourceful group of people who were proud that they refused to knuckle under to the demagogic anti-communists who posed as idealists but who aimed to promote themselves and their careers. Some fired and discharged teachers were exonerated, and even honored — decades later.

I lived through the period of the 1950s and remember it well. My aunts worked for the pubic school system in New York and were investigated as Communists. My father, who was a lawyer, defended them and succeeded in preventing the board of education from firing them.

My college roommate, Eric Foner, now an illustrious historian, is the son of Jack Foner, and the nephew of Philip Foner. I spent my college days in the company of the Foners who continued to conduct research, write, and teach. It would be fair to say that they were my mentors and role models.

Many of my own teachers at Columbia had been radicals in the 1930s; by the 1950s they were no longer on the Left and no longer Marxists. In fact, they wanted to convert us to Freud and to Freudian concepts and to have us understanding that the U.S. was the best of all possible worlds.

I recommend this book to students, scholars, and citizens who care about academic freedom and about the fate of public discourse in America. I also recommend Priests of Our Democracy to those who worry that the war against terror has become in part a war against civil rights and civil liberties at home. Several states, including Ohio brought back loyalty oaths in the wake of 9/11.

When I first went to work for the State of California as a college teacher I had to sign a loyalty oath. I did so without protest. I wanted the job. The muckraking reporter, Jessica Mitford — whom I knew in Oakland — didn’t sign the oath when she was asked. She took on the oath itself and the administrators who enforced it as a matter of moral principle. She had far more resources than I and her husband, Bob Treuhaft, was an outstanding civil liberties lawyer. I might have asked my own father to take my case — and he would have been happy to do so — but he died long before I was hired.

The Priests of Our Democracy is also meant for those who work for colleges and corporations and at hospitals, radio stations, and elsewhere and who feel that in order to keep their jobs they have to censor themselves. Heins offers a telling quotation from Edwin Harold Eby, a lefty professor, who spoke for many Americans when he said, “If I was going to make a living in the U.S. I had to shut up — that was part of the job.”

Self-censorship is, as Marjorie Heins knows, perhaps the most effective and noxious kind of censorship on the face of the earth, and, unfortunately, it’s alive and well today from New York to Moscow and from Cairo and Los Angeles to Shanghai and Caracas.

[Jonah Raskin is a professor emeritus at Sonoma State University, where he taught First Amendment law. He is a regular contributor to The Rag Blog and the author of For the Hell of It: The Life and Times of Abbie Hoffman, and American Scream: Allen Ginsberg’s Howl and the making of the Beat Generation. Read more articles by Jonah Raskin on The Rag Blog.]