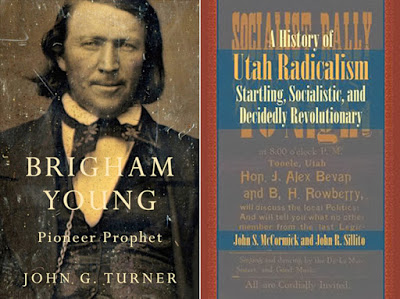 The reds under Romney’s bed

The image of the Red Cavalry going into battle with the Book of Mormon in their saddlebags is quite a stretch; most of us, on the contrary, would probably vote for Mormon ‘socialism’ as the ultimate oxymoron.

In 1884 the journalist Edward Bellamy, struggling with an idea for a utopian novel, visited the only actually-existing communist society on earth: Utah. More precisely he spent a week in Brigham City, seat of Box Elder County, where Apostle Lorenzo Snow, who would later become the fifth LDS president (and the last to have personally known Joseph Smith), showed him the workings of a dynamic community based on pooled wealth, producer and consumer cooperatives, and the use of labor scrip instead of money.

Bellamy, like many previous Gentile visitors, was greatly impressed by the Mormon gift for disciplined cooperation. A decade earlier the celebrated explorer-scientist, John Wesley Powell, had championed the Mormon principle of communal water-management in his landmark but controversial Report on the Lands of the Arid Region of the United States. But Bellamy — like Lincoln Steffens returning from Russia in 1921 — was even more enthusiastic: he had seen the future and it worked.

Looking Backward (1888), Bellamy’s portrait of a prosperous but authoritarian socialist America in the year 2000, became a bestseller and seeded the “Nationalist” club movement that was an immediate precursor of the Socialist Party of America. (The iconic Bradbury Building in downtown Los Angeles was built by a wealthy Bellamy supporter as an anticipation of the architecture of that socialist future.)

The similarities between Bellamy’s collective commonwealth and the Mormon ideal of “consecrated” community, as well his “Industrial Army” and the semi-military organization of Young’s Deseret, have ignited controversy for more than a century. Indeed one rabidly anti-Mormon website currently makes the claim that as Brigham City influenced Looking Backward, so did Bellamy’s novel influence Bolshevism, thus implicating the Romneys through their church in “the horrors of communism.”

But the image of the Red Cavalry going into battle with the Book of Mormon in their saddlebags is quite a stretch; most of us, on the contrary, would probably vote for Mormon “socialism” as the ultimate oxymoron. But millenarian ideologies — whether the Sermon on the Mound, the revelations of Joseph Smith, or the ideas of Karl Marx — have an unfortunate tendency to be coopted by advocates of antithetical values.

John G. Turner’s new biography of Brigham Young — a scholarly and judicious book that is unlikely to be burned in Temple Square — portrays a social experiment, the most ambitious in American history, that until Young’s death in 1877 explicitly rejected the core values of Victorian capitalism: possessive individualism and Darwinian competition.

He emphasizes, for instance, that while “the nexus of American evangelicalism was individual salvation, Young’s theology, like that of Joseph Smith, centered around extended families.” “For Brigham Young, like Joseph Smith, the chief end of humankind was eternal fellowship and familial glory. ‘[If] men are not saved together, they cannot be saved at all.’” And Smith famously vowed that he would rather go to hell with the Saints than to heaven without them. [161]

Moreover classical Mormonism, like Pentecostalism in the twentieth century, was a religion of the poor and the ruined: hard-scrabble farmers, rural laborers, artisans and downwardly mobile craftsmen, failed small businessmen, and, most strikingly, an army of refugees from England’s Satanic mills that Young and others led to America.

Dickensian England was the major target of early Mormon proselytism. Young arrived in Manchester, capital of the Industrial Revolution, in 1840 in time to witness the formation of the National Charter Association, the first working-class political party, amidst epic social turmoil.

Like Friedrich Engels two years later, Young was appalled by the living and working conditions of the factory working class as well as the servility of the poor. Lancashire, Turner tells us, was already over-run with itinerant preachers and tiny sects broken from Methodism, but Young and his companions were more eloquent egalitarians, offering economic as well as spiritual solutions to proletarian misery.

“Mormon missionaries focused on evangelicalism rather than on politics or socioeconomic analysis, but with no ties to British elites or the established order they unflinchingly lamented the poverty of the labouring, classes, denounced the monarchy’s conspicuous consumption, and promised their converts land and employment in Illinois.” [70]

After the exodus to the Great Basin and the establishment of the briefly independent state of Deseret, Young tirelessly preached the impossibility of coexistence between the communitarian values of Zion and the greed-driven capitalism of Babylon (the United States). Indeed even before the Saints’ wagons had reached Salt Lake City he had repulsed mutineers who wanted to keep going to fat valleys and gold fields of California, straight into the open maw of Mammon.

The driving of the Golden Spike in 1869, however, flooded Utah with cheap Eastern goods as well as outlaws, mineral prospectors, and Gentile immigrants. A few years later the Crash of 1873 demonstrated that Utah was no long insulated from what Young denounced as “the oppression of monied monopolies.”

“The sooty misery of working-class England,” Turner explains,” had left Young with a lingering belief that capitalism could produce an existence worse than chattel slavery.” Convinced that the Kingdom of Saints was now threatened with moral and economic absorption into a society run by Robber Barons and stock jobbers, Young launched a Mormon Cultural Revolution: the United Order of Enoch.

Under the Order, “the Latter-Day Saints would consecrate their property and resources to common management, divide labor according to specialized ability, and eliminate disparities of wealth.” (399) Young, although old, fat, and in declining health, spent most of 1874 and 1875 passionately — and sometimes threateningly — shepherding his people into lives of deeper generosity and unity. The original template was Brigham City, but some of the poorer frontier Mormons “attempted to fully live out Young’s communitarian vision.” (399)

The most complete embodiment was Orderville, east of Zion National Park, where private property had been abolished, members ate in a common hall, and there was no trade with the Gentile world. Turner quotes Wallace Stegner’s estimation of Orderville as a “communism of goods, labor, religion, and recreation such as the world has seen only in a few places and for very short times.” [400]

Although Orderville, Brigham City, and a handful of other Mormon kibbutzes survived through 1880s, the United Order encountered intractable resistance from an emerging upper class of Saints, some of them in lucrative business partnerships with Gentiles. A mining boom, meanwhile, diverted the loyalties of many working-class Mormons. Despite Young’s ceaseless campaigning, public enthusiasm for the United Order died within a few years.

This was the major political and spiritual defeat of Young’s reign. At the dedication of a new temple in St. George, the same southern Utah town where he had launched the United Order only three years earlier, the LDS President gave a fierce speech against the corruption of the Morman soul by capitalism, railroads, and mines. He warned his People that they would “go to Hell” unless they repented materialism and greed. For emphasis he pounded the pulpit with his gnarled hickory cane. Six months later, in August 1877, he died.

MacCormick and Sillito’s fascinating history of the Utah Socialist Party in the early twentieth century (it won 115 state and local elections ) includes a detailed account of the Church’s eventual embrace, after Young’s death, of the capitalist civilization and rule of money that he and Smith had so abhorred. This great U-turn was partly driven by heightened inequality, even class conflict within late-Victorian Mormon society. It was also compelled by the Edmunds-Tucker Act of 1887 which confiscated the Church’s assets, as well as disenfranchising women in the territory (they had won the vote in 1870) and disinheriting the children of plural marriages.

Washington’s message to the LDS was simple and implacable: abandon polygamy and open the doors to eastern capital or face destruction. Brigham Young doubtlessly would have defied the Republicans in Congress, taking his people into the mountains or moving to Mexico, but his successors capitulated: abolishing plural marriage in 1890 and sending church leader Heber J. Grant to Wall Street to establish a credit line for the Church. After statehood, moreover, they moved the LDS hierarchy into the ranks of its former archenemy, the Republican Party.

“Thereafter,” write MacCormick and Sillito, “Church leaders would not only feel increasingly at ease with the ways of American capitalists, but they would be beholden — at least in the short run — for their services. Within another decade these influences would go so far that muckraking journalists would begin to cast the Church in the role of a Wall Street plutocrat.” [383]

After three generations of persecution, migration, and backbreaking labor to achieve an egalitarian Zion, the conservative reformation in Salt Lake City was deeply disorienting to many Mormons. As original research for Utah Radicalism has established, at least 40 percent of the Socialist Party membership in Utah before 1920 were Mormons, most of them devout.

Many were the children of the United Order, like Lillie Engle who grew up in Orderville and became a Socialist candidate in Emery County in 1912. (In a poignant reminiscence, she equated the “sorrows that only the domestic servant, the widow, the ‘Mormon,’ the unpopular socialist, and the poor oppressed workers of the world know.”)

Despite increasing attacks by the Church on “satanic” socialism, a number of well-known Socialists were able to play prominent roles in both of their faiths, like Bishop Alexander Matheson in Cedar City or Gottlieb Berger, a Socialist who served on the Murray City commission from 1911 to 1932 while president of his ward’s High Priest Quorum. But the most potent individual link between repressed Mormon communism and Debsian socialism was Virginia Snow Stephen, the daughter of Lorenzo Snow of Brigham City fame, who campaigned to save the life of Joe Hill in 1915.

Gentiles, especially evangelical Christians, have obsessed for 175 years about the occult internal doctrines and practices of the Mormons. But secret handshakes and passwords can be found in any Moose Lodge, weird underwear is widely en vogue, and washings, annoitings, and sealings are just so much boilerplate religious mumbo jumbo. The real scandal of the modern Church is that its so-called Prophets refuse to hear Brigham Young, hammering on the ceiling of his tomb with his hickory cane and demanding the overthrow of Babylon.

A version of this article will be published by the Los Angeles Review of Books.