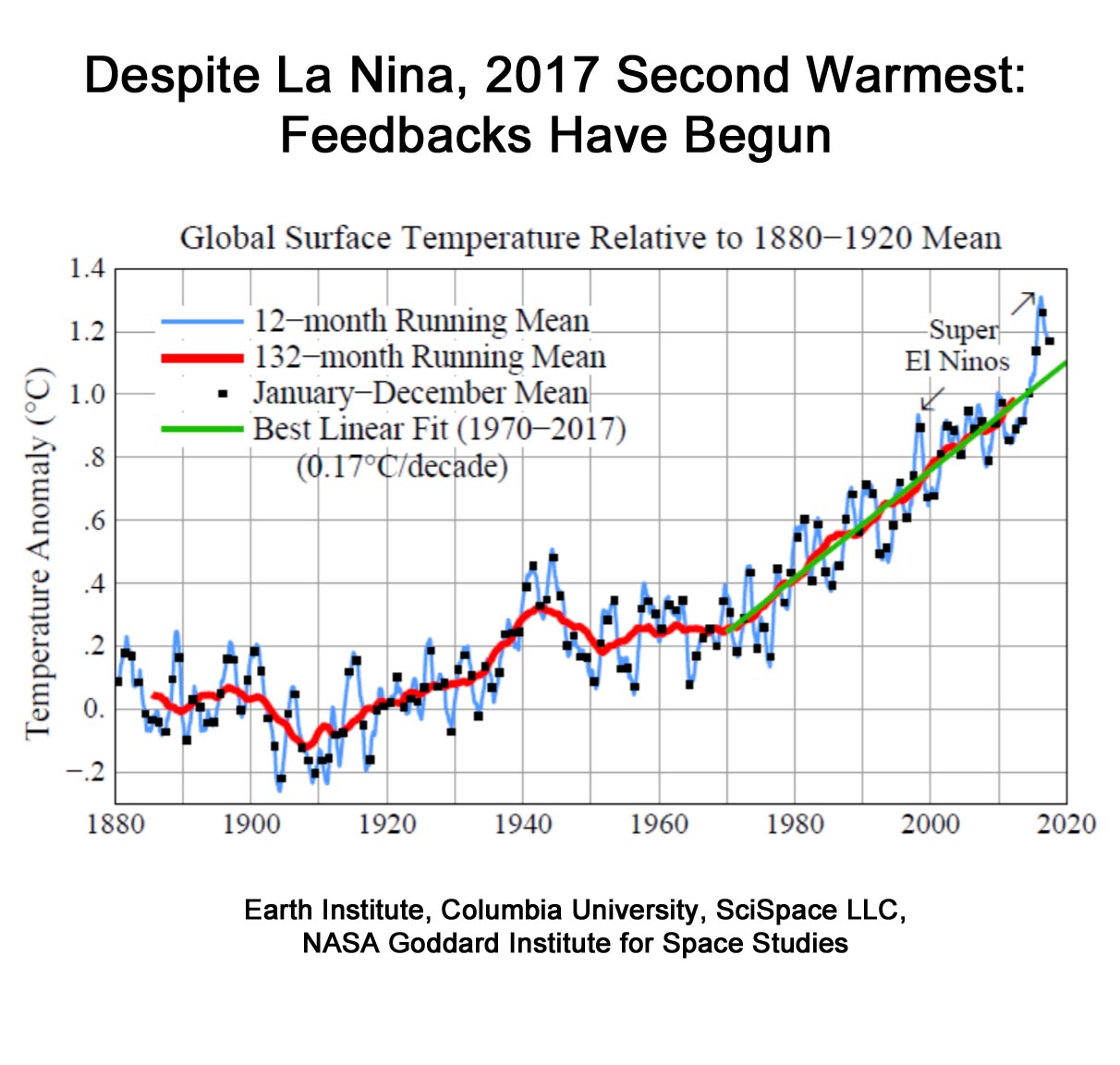 “Mean” is the statistical term for “average. The “running mean” averages each successive periods like, January through December, February though January, March through February, etc. The 12-month running mean shows the peak of El Nino in early 2017 at about 1.34 C.

NOAA, the UK Met, and World Meteorological Organization (WMO) have all stated that 2017 was third warmest. But these three organizations use data that only averages temperature in the Arctic out to 150 miles from reporting stations. This is a big problem when thousands of miles of Arctic Ocean have no weather reporting stations and we know from those reporting stations that the Arctic is warming at least twice the global rate.

In 2010, NASA began using a polar temperature averaging approach that looks out 750 miles from reporting stations to better capture polar warming. The result is that other estimates are biased warm and therefore the reason why NASA ranks 2017 second warmest instead of third.

Planet Earth gives up heat grudgingly. Our most recent Super El Niño played a role in Earth’s temperature, but now the question is, why are we still so warm? El Niño warming started in late 2014 and was back to zero by mid-2016, but the 2017 temperature was marginally warmer than the first year of our most recent Super El Niño in 2015. And In November 2017, the National Weather Service announced that we were officially in a weak to moderate La Niña, with cooler than normal Southern Pacific surface temperatures.

NASA’s Global Temperature in 2017 likely has an answer. The report says:

…the 2017 global temperature remains stubbornly high, well above the trend line, despite cooler than average temperature in the tropical Pacific Niño 3.4 region [La Niña]… Conceivably this continued temperature excursion above the trend line [the 2017 global average temperature] is not a statistical fluke, but rather is associated with climate forcings [emissions] and/or feedbacks. The growth rate of greenhouse gas climate forcing has accelerated in the past decade. There is also concern that polar climate feedbacks may accelerate.

Very important to this discussion is a major report in 2009 (referenced in the NASA quote above by Sommerkorn and Hassol) telling us that human-caused warming has impacted the Arctic earlier than previously projected. Arctic feedbacks “are beginning to accelerate global warming significantly beyond the projections currently being considered by policymakers.”

The snow and ice feedback in the Arctic is just one of many and it works like this: snow and ice reflect up to 90 percent of sunlight harmlessly back into space. Soil, plants, rocks, and water absorb up to 90 percent of sunlight and change it into heat where it is trapped on Earth by the greenhouse effect. A little warming melts a little ice that traps more heat and creates more warming that traps even more heat until all the ice is gone.

The report says that “recent observations strongly suggest that climate change may soon push some systems past tipping points, with global implications.” They tell us that as Arctic sea ice melts, the additional heat absorbed by the Arctic Ocean is accelerating local and regional warming and preventing sea ice from recovering. They also say that “[These] arctic feedbacks may increase regional or global warming significantly enough [so] that it would alter other climate feedbacks.”

Global feedbacks already arising from arctic climate change suggest that anything but the most ambitious constraints on greenhouse gas concentrations may not be sufficient to avoid such interference [as further feedback warming.]

Climate change in the Arctic is affecting the rest of the world by altering atmospheric and oceanic circulation that affect weather patterns, the increased melting of ice sheets and glaciers that raise global sea level, and changes in atmospheric greenhouse gas concentrations (by altering release and uptake of carbon dioxide and methane).

The author’s conclusion in 2009 is now 10 years old. Climate change has been accelerating since this work suggested as is evident in the increasing number of recent unprecedented extreme weather events and the increasing extremeness of these events.

In 2009 the authors said climate warming would continue to outpace projections because of feedbacks even in the face of continuing lesser projections.

This assessment of the most recent science shows that numerous arctic climate feedbacks will make climate change more severe than indicated by other recent projections, including those of the IPCC 2007 assessment. Some of these feedbacks may even interact with each other. Up-to-date analyses of the global consequences of arctic change highlight the need for ongoing critical review of the thresholds of dangerous human interference with the climate system, and demand increased rigour to stay below these thresholds through an ambitious global effort to reduce atmospheric greenhouse gases.