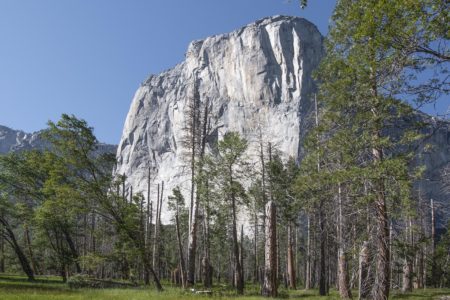 Bruce Melton will discuss his recent environmental expedition to Yosemite National Park at Thorne Dreyer’s 74th Birthday Bash, a benefit for the New Journalism Project which takes place this Thursday, August 1, 6-9:30 p.m., at The High Road on Dawson. Bruce and his Climate Change Band will perform at the event, as will jazz singer Sarah Sharp.

As of 2017, 2.4 million trees have been killed by bark beetles in Yosemite National Park.

Some say it’s a natural occurrence, and it is. It happens every time our climate changes abruptly.

This story is a part of Climate Change Across America, an epic filmmaking effort to document the ongoing extreme impacts of climate change already happening across North America. This is our fifth year of production and we have driven 52,500 miles in our quest so far, from Brownsville to the North Slope of Alaska, short on money, camping almost always. (See Beach Report 2019, 2018 Photo Tour, 2018 Trip Log, 2018 Instagram, Permafrost 2018, Beach Report 2017, The Desert 2017, The Beetles 2016, and more at ClimateDiscovery.org.)

We are documenting what no others are documenting: sea level rise beach erosion that has already eroded away much of our wild barrier island beaches; unprecedented beetle-killed forests across North America from a native bark beetle; permafrost melt that has caused Alaska to flip from a carbon sink to a carbon source; flooding that has increased to the million-year storm intensity with Hurricane Harvey; and the 14,000 catastrophes in one day when a climate change-maddened wildfire swept through Paradise California.

What we are documenting is remarkable in that, when it makes the media it is often portrayed as being “natural cycles.” This is an explanation that sounds good, but it simply is not good sound science. The perceived debate has taken its toll and our country’s most precious resources are imperiled and currently in various states of egregious collapse. This installment of our story is about climate change in Yosemite National Park. (See our Instagram videos from 2019 here.)

2.4 million mature trees have been killed by native bark beetles inside the park.

Yosemite National Park, California, July 2019: 2.4 million mature trees have been killed by native bark beetles inside the park. The beetles have overpopulated as winter temperatures have risen and the summer beetle breeding season has lengthened. Real drought and perceived drought, where warmer temperatures create more evaporation even with normal rainfall, has caused trees to create less sap, which is the main method that trees use to repel bark beetle attacks.

Across North America, 96 million acres of forest have been mostly killed by bark beetles since the turn of the century. This area is the size of New England, New York, and New Jersey combined, dwarfing any previous known attack. The kill in California peaked in the mid-twenty teens with their worst drought ever recorded.

The culprit is a tiny grain of rice-sized native bark beetle driven berserk because of warming. The beetles thrive on drought-stressed trees and create astonishing attacks that can kill 95 percent of the trees in a forest. The attack in Yosemite hasn’t been this extreme, but it remains ongoing and even the best-case warming target of 1.5 C allows triple the warming that allowed this global beetle pandemic to begin.

The beetles in Yosemite are active between about 3,000 and 4,500 feet in elevation, on about 18 percent of the total park area of 748,000 acres. Badly impacted is the central Yosemite Valley.
The National Park Service is cutting 5,000 trees per year to help keep campers safe and for good reason. A wood fungus accompanies the beetle making the dead wood extremely brittle, greatly enhancing the risk of visitor injury if the dead trees are not promptly cut in popular areas.

Who knows that our national treasures are collapsing?

But who sees it? Who knows that our national treasures are collapsing? The media certainly isn’t dwelling on it. Part of the reason is that the dead trees literally disappear back into the forest. Their dead sticks are only about 10 percent as visible as when they were leaved. And besides, dead trees are just a normal part of the forest, right?

It’s hard to see unless you are looking. I ask tourists all the time, “What do you think about all the dead trees?” They respond with, “Oh yeah, what do you call those pretty red pine trees?” Then, in the most visible areas where the most tourists are located, the Park Service cuts down the dead trees quickly to keep from killing tourists.

Like last year in Yosemite, the beetle kill was nowhere near epidemic attack levels after two years of banner winter snow. But new beetle kill persists. Some say it’s from stress because of Smokey Bear fire suppression policy but the facts are that if it were not for warming, and nonlinearly increasing stress from warming, these attacks would be no bigger than they were before the turn of the twenty-first century when climate change warmed beyond natural variation. 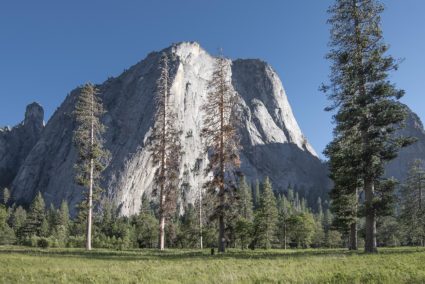 Two ponderosas fallen to beetle kill this year despite two banner years of snow in a row. Photo by Bruce Melton / The Rag Blog.

The Sentinel, Half Dome, El Capitan, Bridal Veil, Yosemite Falls… I shot some climbers on El Cap, framed by beetle kill ponderosa in the foreground. Out national treasure should not have to exist with a destroyed forest at their feet, but they do.

National Forests are dying at a rate that is twice as fast as they are growing.

U.S. National Forest Service data now shows that U.S. National Forests, on average, are dying at a rate that is twice as fast as they are growing. Warming to 1.5 C targets will dramatically increase forest mortality, and these forests will not grow back. Not until we not just limit warming to 1.5 C, but until we restore our climate to the evolutionary boundaries where our ecosystems evolved.

Please help us get this story out. Our national treasures and treasures across the world are at grave risk. We must change the rhetoric in our climate change culture from one of dangerous climate change avoidance with 1.5 C, to climate restoration where we restore our climate to the temperature range where our global ecologies evolved, where these unprecedented climate change impacts cease.

Our climate warmed beyond natural variation about 2000… This is really when climate change became real, when our climate statistically warmed more than what can be expected as with normal variation in weather. In general, temperature extremes began emerging from natural variation in some parts of the world about 1980, and will conclude across most parts of the world by 2020. Therefore the average time of anthropogenic emergence is about 2000.
King et al., The timing of anthropogenic emergence in simulated climate extremes, Environmental Research Letters, September 10, 2015.
https://iopscience.iop.org/article/10.1088/1748-9326/10/9/094015/pdf

Forest mortality exceeds growth for the first time… US National Forests are dying at a rate that is twice what they are growing.
Forest Mortality Exceeds Growth In America’s National Forests, Forest2Markets, May 31, 2018.
https://blog.forest2market.com/forest-mortality-exceeds-growth-in-americas-national-forests
Data: Forest Resources of the United States, 2017: A technical document supporting the Forest Service 2020 Resource Planning Act (RPA) Assessment.
https://www.fia.fs.fed.us/program-features/rpa/docs/2017%20RPA_TABLES%20Federal%20Register%20Review%20Draft%20032917-pdf.pdf

[Bruce Melton, a longtime contributor to The Rag Blog and guest on Rag Radio, is a professional engineer, environmental researcher, filmmaker, author and CEO of the Climate Change Now Initiative in Austin, Texas; the oldest, independent climate science education organization in the world founded in 2005. The Climate Change Now Initiative is a nonprofit outreach organization reporting the latest discoveries in climate science in plain English, using global warming psychology to communicate this new science on the right side of the brain. The Initiative’s science reporting, films, music and images of climate impacts happening now can be found at ClimateDiscovery.org.]