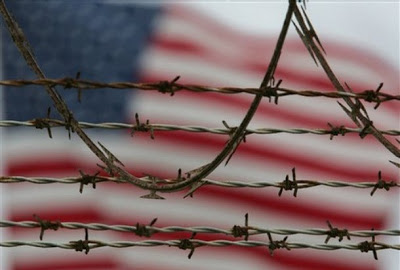 A flag waves behind the barbed and razor-wire at the Guantanamo Bay detention center. Photo by AP.
Richard Klingler:

‘the wartime framework underlying [these tactics] have settled well within the mainstream of the American tradition,’ setting the stage for ‘a broader recognition of the established legal basis for indefinite detention.’

At the Senate Judiciary Committee hearing this morning titled “The Legal, Moral, and National Security Consequences of ‘Prolonged Detention,’” it was actually Richard Klingler, a former lawyer in the Office of White House Counsel under President George W. Bush and former general counsel on the National Security Council staff, who presented the dilemma most starkly in his testimony. From his prepared remarks:

The debate over indefinite detention often wrongly focuses on Guantanamo Bay. The current practice is considerably more widespread, and any limitations on indefinite detention would have correspondingly wide implications. The U.S. military indefinitely detains enemy combatants, including members and supporters of al Qaeda and other terrorist organizations, on a wide scale in Iraq and Afghanistan, as well as at Guantanamo, and press reports indicate that U.S. officials work closely with our allies to detain al Qaeda members in other countries.

“Prolonged” detention is thus not something proposed for the future, for just a small subset of Guantanamo detainees. It is, instead, a practice that this Administration is already conducting on a widespread scale, will continue to pursue, and has already defended repeatedly in federal court. No matter how Guantanamo detainees are handled, this Administration will continue, directly or indirectly, to detain hundreds if not thousands of enemy combatants indefinitely in many places for many years to come.

The upshot of all this, said Klinger, is that “the wartime framework underlying [these tactics] have settled well within the mainstream of the American tradition,” setting the stage for ” a broader recognition of the established legal basis for indefinite detention.”

That was clearly not what Sen. Russ Feingold (D-Wis.) hoped to establish by holding today’s hearing, which also included testimony from a range of established international law and human rights experts about the dangers such tactics have created. But Klinger’s testimony, although perhaps framed to legitimize the Bush administration’s actions now under assault, did make clear the importance of Congress taking a hard look at what the current administration is doing under its watch.