BushCo Demands Are Unacceptable to Many Iraqis 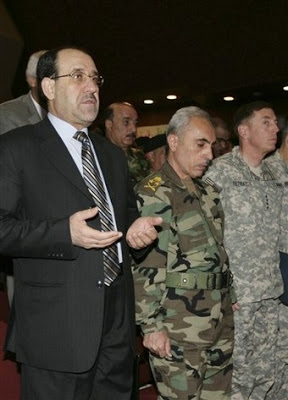 Negotiations are underway between the two countries to decide how long troops will stay. The U.S. is scaling back its forces.

BAGHDAD — Officials in Prime Minister Nouri Maliki’s ruling coalition are questioning whether Iraq needs a U.S. military presence even as the two countries press forward with high-pressure negotiations to determine how long American forces will remain.

Some officials in Maliki’s Islamic Dawa Party and his larger Shiite United Iraqi Alliance bloc, which has cooperated with the U.S., have spoken in favor of imposing severe restrictions on U.S. forces after the United Nations mandate authorizing their presence expires at the end of the year.

Maliki and President Bush last year outlined goals for an agreement covering military, trade and cultural relations. They pledged to return Iraq to full sovereignty and said the agreement was expected to be finalized by July 31.

According to Iraqis, Americans supported a draft of the agreement that called for allowing U.S. forces to detain Iraqis and conduct missions without the government’s permission. They have also said the Americans required up to 58 permanent bases, control of Iraqi airspace and immunity for troops and contractors.

American officials have refused to disclose their negotiating stance and have accused their critics of deliberately distorting U.S. positions.

David Satterfield, the State Department’s senior advisor on Iraq, said Tuesday that the U.S. remained committed to an agreement by late July. He denied that the U.S. was pushing demands that infringed upon Iraq’s independence.

“We want to see Iraqi sovereignty strengthened, not weakened,” he said.

U.S. forces are scaling back from a massive troop buildup last year known as “the surge,” which helped put the brakes on Iraq’s civil war. U.S. troop levels are expected to drop to an estimated 140,000 by July as the Americans evaluate the effect of their military reductions on Iraq’s security. It remains to be seen whether the fragile peace between the country’s Shiite majority and onetime Sunni elite will hold if the Americans quickly leave the country.

United Iraqi Alliance lawmaker Sami Askari, who is considered a member of Maliki’s inner circle, said the changes in opinions in many cases are gradual.

“There is the camp who still believe that we need the Americans to stay and the other camp that says we don’t need them anymore,” Askari said. “You can’t draw a line, even within the Dawa Party, even within” the alliance, he said.

Shiite officials like Askari have warned there is no way any Iraqi politician could back the current U.S. security agreement proposals.

“If I’m from the group that believes in the need for the Americans to stay, and then they face me with such a draft, then I’ll say, look, I’d rather go with the others,” Askari said.

Iraqi Foreign Minister Hoshyar Zebari, a Kurd, has defended the agreement. “The recent statements you’ve heard, the recent politicking you heard by different groups has really been very unhelpful,” he said. “There has been no agreement yet.

“Secondly, most of the statements are coming from people who are unaware or not involved in the heart of this negotiating procedure. It has really been used for political brinksmanship,” Zebari said.

Senior Iraqi politicians and Western officials confirmed the friction and debate within the alliance about an agreement.

“Of course there are some people who are against it, no doubt,” said Deputy Prime Minister Barham Salih, who is a leading negotiator on the Iraqi side. Salih vowed that the Kurds, Maliki and the country’s presidency council would get approval for a bilateral agreement despite any opposition within the alliance.

Others warned that some Dawa members were seeking to sabotage a long-term deal.

“There is a lot of misrepresentation. It is deliberate. Some people don’t want this on principle. Some people may have ideological problems with this. Now they are showing their true colors,” said a senior Iraqi official who did not wish to be identified because it could endanger his position.

He warned that even Maliki’s backing was not a given. The prime minister is faced with pressure within his party. In the past, officials have described Maliki as flip-flopping on government decisions.

The official described Dawa members as having become overconfident after successful military campaigns this spring in the southern port of Basra, Baghdad’s Sadr City and Mosul that relied heavily on U.S. air support to defeat Sunni and Shiite armed groups.

Read all of it here. / Los Angeles Times