After allowing George W. Bush into Canada to speak, it is telling that the same government would bar the British MP George Galloway. 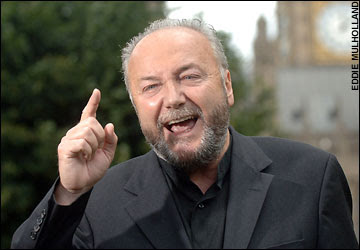 George Galloway, the Respect MP, reacts angrily outside the Commons
in July 2007 after being told he faces suspension.
British MP Galloway barred from Canada over ‘supporting Hamas’
By DPA / March 20, 2009

Outspoken British anti-war member of parliament (MP) George Galloway Friday denounced as “outrageous” a decision by the Canadian authorities to refuse him entry on the grounds of national security.

Galloway, a former Labor politician who has now set up his own political party, said in London that he would not accept the ban imposed ahead of a speech he had planned to give in Toronto.

The 54-year-old maverick politician, who left Britain’s ruling Labor Party in protest at its support for military intervention overseas, was refused entry to Egypt in 2006. He is an MP for his Respect Party.

“All right-thinking Canadians, whether they agree with me over the wisdom of sending troops to Afghanistan or not, will oppose this outrageous decision,” he said in London Friday.

He was due to speak at a public forum entitled “Resisting war from Gaza to Kandahar” in Toronto on March 30.

According to the Press Association Friday, a spokesman for Canada’s immigration minister, Jason Kenney, has made clear that the decision will not be overturned.

Galloway had been deemed “inadmissible” to Canada under section 34(1) of the country’s immigration act.

Kenney’s spokesman, Alykhan Velshi said the act was designed to protect Canadians from people who fund, support or engage in terrorism.”

“We’re going to uphold the law, not give special treatment to this … street-corner Cromwell who actually brags about giving ‘financial support’ to Hamas, a terrorist organization banned in Canada,” Velshi was quoted as saying by the British Press Association.

This entry was posted in RagBlog and tagged Canada, Great Britain, Peace Activists. Bookmark the permalink.