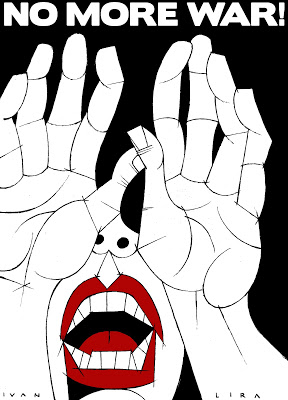 War will exist until that distant day when the conscientious objector enjoys the same reputation and prestige that the warrior does today. — John F. Kennedy

I lost a friend recently with whom I’d grown up. As adolescents, we’d shared enthusiasms, and death-defying leaps into Lake Michigan off the Adler Planetarium, and chased the same girls. He had a puckish sense of humor, sometimes ghoulish, the kind of stuff you laugh at only when you’re 15.

He could crick his neck with a loud snap, as if being hanged from a gallows, a party trick that revolted grownups but we thought hilarious. He could pick out a tune on a banjo on first hearing and sing political parodies of pop songs. As we grew up, we shared a history, not only of our acne-scarred, ego-obsessed selves, but something broader and deeper I best call anti-fascism.

We ran wild in the streets of Chicago itching for showdowns with anyone who disagreed with us — we were young Communist-fronters and couldn’t wait to enlist or be drafted. In the middle of the second world war, it was patriotic to be a red — “communism is 20th-century Americanism,” went the slogan.

Passion, not cynicism or detachment, was our deal.

With his death, I’ve lost a big part of the thread, a connection to the original meaning of things. I’m not alone in this broken thread on Memorial Day.

If you’re in the United States while reading this, try a little test: ask someone, anyone, what Memorial Day memorializes? I’ve queried several friends and none could tell me that Memorial Day, once called “Decoration Day,” began in the aftermath of the civil war to honor the more than 600,000 dead Confederate and Union soldiers — the deadliest war in U.S. history.

Once, Memorial Day was a fairly solemn occasion when local communities lowered the courthouse flag to half-mast in salute to the “fallen,” with jamboree parades to follow. In the 1960s, Congress changed the date to the last Monday in May so that people might have an extra day off on the weekend. Hence the current barbecues and shopping mall mania — and national amnesia.

Except for the boy and girl Scouts, who still place little American flags on grave sites in our veterans’ cemeteries, like the one almost within sight of my house, and a few soldiers’ and sailors’ relatives who come to visit, the original meaning of it has fallen into dust.

Curious, this. Because the publishing industry continues to pump out torrents of civil war books to feed a niche audience with pop biographies of bearded generals and Pickett’s charge-type battle studies. Historians continue to debate the core cause of the war, and movies get made like Glory, Gettysburg, Cold Mountain, and Robert Redford’s recent The Conspirator.

No matter, most of us like to go on a Memorial Day shopping spree, warm up the coals, pull out the cooler and slap shrimp tacos on the broiler.

I don’t care how Memorial Day is spent, whether in a relaxed holiday mood or a visit to the dead. I’ve walked through the military graves at my nearest military graveyard, the 114-acre national cemetery near UCLA with its huge adjacent Veterans Administration hospital and old soldiers’ home, full of sick and traumatized ex-combatants, and a homeless encampment of veteranos under the 405 freeway, a grenade’s throw away from cemetery where some of their buddies lie under white crosses or stars of David.

Meaning no disrespect, but on this “war heroes’ weekend,” isn’t it time to also honor those who have “fallen” in a different battle — against the slaughtering wars?

Over time, my attitude to conscientious objectors and deserters has shifted. Once, I held them in contempt. But the Vietnam war, when I came into contact with war resisters, changed me. I saw then, and see now, that often it takes a different kind of moral and, yes, even physical courage to resist a call to serve your country in a war you believe is a crime, when all your family, friends, teachers and the vast American majority support joining up.

When I was called to my war, I went with shining eyes and revenge in my heart and couldn’t wait to get my hands on a .30-calibre machine-gun to wipe out those Nazi bastards.

But what about those “cowards,” “traitors,” and “slackers” who don’t want to kill other people? They’re an odd breed who count among their number such as Muhammad Ali, Mahatma Gandhi, Sergeant York, David Hockney, three U.S. weapon-refusing combat medics who won the medal of honor, and the 27 Israeli air force pilots who refused orders to “track and kill” civilians in Gaza and the West Bank.

I continue to be amazed at the stupendous bravery of any currently serving soldier or marine who goes out on foot patrol in Afghanistan knowing beforehand that his command — after spending $20 billion on an “anti-IED” project — still has no clue how to protect him from a cheap roadside bomb that causes 80% of our casualties. (On Wednesday, seven Americans on a single patrol were blown up and killed by an IED in Kandahar province.)

But what kind of guts does it take for war objectors, whether they’re Quakers, Jehovah’s Witnesses, Mennonites, or secular, who simply don’t want to kill?

On this Memorial Day, it might be a time to think about the outcasts who refuse to take life.

[Clancy Sigal, is a screenwriter and novelist in Los Angeles. Chicago-born, he has worked precincts for Democratic candidates since his teens. He emigrated to the UK during what David Caute calls the “Great Fear” and returned to America after the 1984 miners’ strike. He is a reformed Fleet Street journalist. This article was distributed by AlterNet.]