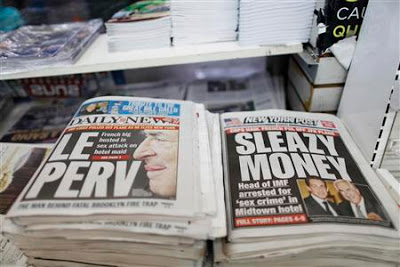 [This is the second in a series of dispatches from France by The Rag Blog‘s David P. Hamilton.]

PARIS — When I planned to write a series of articles from France, discussing the justice system was not on my list of topics. But given that the scandal involving Dominique Strauss-Kahn is on every front page, it’s unavoidable.

In anticipation of critical reaction, allow me preface my comments by saying that I regard rape as prima facie evidence of misogyny and thus a hate crime deserving enhancement of already justly severe punishment. Furthermore, despite my favorite economist, Joseph Stiglitz, writing recently in praise of Dominique Strauss-Kahn’s leadership of the IMF, DSK was hardly my favorite candidate to become the next president of France.

He represents the right wing of the Socialist Party and in a partisan political sense, I’m glad he’s gone. In addition, if I were forced to bet on DSK’s actual guilt or innocence, I would have to put my money on the former.

It must also be said that France is hardly a paragon of virtue when it comes to the issue of women’s rights. French women were only granted the vote in 1945. As reported in The Guardian (London),

Simon Jackson, an English historian at Sciences Po, the elite political studies institute in Paris, shares the view that, in France, male attitudes to sex lag behind Britain in terms of equality. “I think that’s in large part the product of serious and continuing deficits in the opportunities women enjoy professionally, educationally and socially in France, which is one of the least gender-equal countries in the EU.”

Nonetheless, I believe that DSK’s right to a fair trial has been irreparably violated by actions on the part of the NYC police, prosecution, and media. Hence, his case should be dismissed and he should sue every media outlet that contributed to his pretrial humiliation, particularly the New York’s Daily News and Rupert Murdoch’s New York Post.

It is simply preposterous to argue that parading a disheveled DSK in handcuffs surrounded by a phalanx of police in front of hordes of photographers did not compromise his prior presumption of innocence. This is not only true in relation to DSK, but also in the case of anyone else abused by this unnecessary practice.

In France, such police behavior is quite specifically illegal. The Daily News plastered the DSK’s photo on its cover with the caption “Le Perv,” as in pervert. It cannot be argued reasonably that the potential jury pool in NYC was not thereby tainted.

Such behavior on the part of the police in France or the UK would result in the dismissal of the case on the basis of police misconduct and the resulting libel suits would likely never go to court because they would be such an obvious two-handed slam dunk for the plaintive.

In this, the Europeans are quite correct and the U.S. justice system is again revealed as fundamentally flawed.

This flaw is so obvious to Europeans that the French woman who has come forth since the incident in New York with allegations that DSK assaulted her during an interview eight years ago, now says, through her lawyer, that she does not “want to be manipulated by the American justice system, or help out in any way so that these two cases might be linked.”

The woman IMF employee with whom DSK had an affair while head of the IMF has said she felt pressured to sleep with him. This is the case in any situation where a boss hits on an employee. It may or may not have included physical force, although she did describe him as “a rutting chimpanzee.”

DSK was reprimanded and publicly apologized, but was allowed to continue as leader of the IMF without further consequences. Reprehensible as that is, no legal system regards such pressure as rape unless violence or threats thereof were involved. It is certain that she is now under pressure again, this time to testify against him. If she is willing to testify and indicates force was involved, and if the judge allows that testimony in court, DSK is very likely going to prison for the rest of his life.

As a result of his purposeful public humiliation and the resulting pretrial publicity, DSK will eventually get a change of venue if he wants it. But given the magnitude of this case and the fact that it has now been on the cover of every newspaper in the world, that solution, itself a compromise of justice, will not suffice to rectify the abuse of his right to the presumption of innocence or the consequences he will have suffered otherwise.

By the time that happens and he gets a trial, his opportunity to run for president will be a distant memory. He must declare his candidacy within a month and the Socialist Party nomination will be determined in November. The first stage of his trial is not until September. He has already been forced to resign from the IMF. The loss of his powerful job, his reputation and the near certainty he would be the next president of France has already been accomplished and cannot be seen as insignificant punishment, regardless of the trial’s outcome. 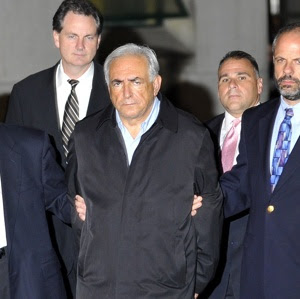 The perp walk. Photo from AP / Getty Images.
Given the defect in American jurisprudence that allows the pre-trial exposure to public humiliation of the accused, it is hardly surprising that France is not willing to sign an extradition treaty with the U.S. The recent Supreme Court decision allowing police to stage home invasions if they merely smell marijuana present only adds fuel to this perception of American justice being heavy handed if not brutal.

With the highest rate of incarceration in the world — mostly poor nonviolent drug offenders without access to good legal representation — the evidence of the U.S. system’s innate injustices is, in fact, ubiquitous.

The principal inherent fallacy in the U.S. legal system is that justice is a commodity. You can get it if you can pay for it. Ironically, this helps DSK because he has the money required. Without other women stepping forth to substantiate the accusations, the case becomes “he said vs. she said.”

The defense lawyers will endeavor to bar the testimony of other women who might step forward with similar allegations against him. With his high paid lawyers, he will likely be able to influence the jury selection in such a way as to find at least one juror who will doubt the case against him.

But why would anyone but sexists doubt DSK’s guilt besides the fact there has been no trial — except in the media, which has already given its guilty verdict despite not having access to the evidence? One possible answer is that polls have consistently shown DSK to be the strongest Socialist Party candidate in the field to defeat Nicolas Sarkozy in next year’s French presidential election. The most recent poll (April 20, 2011) showed DSK beating Sarkozy by 61-39 in the second round run off, a better showing than any other potential Socialist Party candidate.

One of Sarkozy’s aides came out shortly after the arrest saying that there had been previous similar incidents with DSK at that same luxury French-owned NYC hotel, but that the management had covered them up. One might wonder why very wealthy French hotel owners would protect the leading socialist candidate for president who was the clear favorite to displace the right-wing Sarkozy who has promised to Americanize the French economy.

Given DSK’s reputation as a womanizer and the fact that he would soon have to declare his candidacy, the possibility of a “set up” becomes plausible, however remotely, leading one to suspect there might be more here than meets the eye. A poll of 1007 French adults just found that 57% believe that a set-up was either certain or probable.

The other potential conspiracy stems from his attempts to supplant the dollar as the international reserve currency. Others who have advocated a similar goal have included Saddam Hussein and Mouammar Kadhafi. Given its past history of “black ops” it would be naïve to dismiss these kind of activities on the part of the U.S. government out of hand.

It is certain that the U.S. government would find a socialist president of France at least inconvenient. This is not to say these conspiracy allegations have any merit, but they provide a foundation for “reasonable doubt” in the mind of jurors and we are likely to hear more about them from his defense attorneys.

I am actually a big fan of “perp walks,” but only for those who have been convicted in a fair trial. Here, that is anything but the case. In the U.S., the media rushes willy-nilly to convict. It sells newspapers and improves the profit margin, the paramount consideration in a capitalist dominated culture.

There are other potential issues here. DSK’s defenders are being accused of blaming the victim. (Katha Pollitt in The Nation.) But in most press accounts and statements by his defenders, the victim has largely been ignored, that being facilitated by her disappearance. She is no longer on the job or even at home. Were I DSK’s defense lawyer, I would be curious to know who she is talking to besides her family, the police, and the prosecutor.

Then there is the issue of personal matters, such as infidelity, being illegitimate topics in public discussions of politicians. In the U.S., this is not the case. In France, a politician’s private life is usually off-limits. This is a “middle path” issue. Perhaps the U.S. becomes too focused on such private behavior and the French are too protective of their elite.

The principal legal issue remains the maintenance of the accused’s pre-trial presumption of innocence. That is the cornerstone of any reputable system of justice. The U.S. system gives it lip service and then routinely violates the principle. The EU is much more serious about it. Perp walks of those accused of crimes and other similar practices are unnecessary violations of fundamental rights and they should be banned.