Democrats Have Turned Sharply to the Left 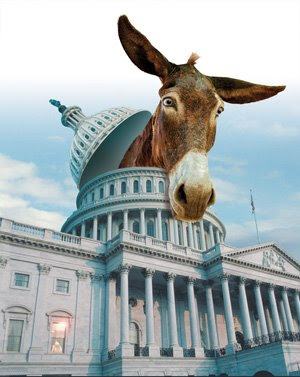 ‘They are more liberal than at any time in a generation’
By Steven Thomma / August 22, 2008

DENVER — As they meet for their national convention Monday through Thursday, Democrats are poised to shift their party’s course — and the country’s.

They’re turning to the left — deeply against the war in Iraq, ready to use tax policy to take from the rich and give to the poor and middle class, and growing hungry, after years of centrist politics, for big-government solutions, such as a health-care overhaul, to steer the nation through a time of sweeping economic change.

They are, in short, more liberal than at any time in a generation and eager to end the Reagan era, which dominated not just the other party, but also their own, for nearly three decades.

“Every generation . . . there are changes in people’s relationship with government,” said Sen. Charles Schumer, D-N.Y. This, he said, is such a time.

The shift of the party also reflects a change in much of the population — evidenced in the policy positions advocated by rank-and-file voters as well as the party’s presumptive presidential nominee, Sen. Barack Obama of Illinois.

“Government SHOULD do more, especially when you’re spending tens of billions of dollars in Iraq protecting the interests of millionaires,” said Rebecca Washington, a Democrat and an accountant from Cleveland Heights, Ohio.

“We’ve got to revoke the tax cuts for the wealthy,” said Vicki Balzer, a Democrat and retired teacher from the Cleveland suburb of Berea. “We definitely need to do something more for the economically disadvantaged. . . . We’ve allowed big corporations to take millions for corporate leaders while workers get nothing.”

Nationally, 40 percent of Democrats in the 2006 midterm elections called themselves liberal, the highest since the American National Election Studies program started asking in 1972.

At the same time, the number of Democrats who support a government safety net for the poor — such as guaranteeing food and shelter for the needy and spending to help them even if it means more debt — jumped by 14 percentage points from 1994 to 2007, according to the Pew Research Center.

That’s a remarkable change since the mid-’90s, the decade when centrist Bill Clinton dominated the Democratic Party, signed a welfare overhaul into law that forced recipients to work, expanded free trade against the wishes of organized labor and famously declared the era of big government to be over.

“During the era when Bill Clinton was president, there was a clear re-centering of the party,” said Democratic Gov. Kathleen Sebelius of Kansas.

Today, she added, “there is a growing understanding that government can play a positive role in investing in our country.”

* The Iraq war lasted longer, cost more lives and money, and proved deeply unpopular. A few years ago, Obama was a rare voice in the party opposing the war; today he’s one of a chorus.

* Anxiety about a slowing economy resurrected fears about American jobs and paychecks in the global economy. Promises to change trade deals such as the North American Free Trade Agreement punctuated the Democratic primaries.

Also, Obama promises a dramatically different tax policy, one that would raise taxes on the wealthy, cut taxes for the middle class and offer new “refundable” tax credits to the working poor that would wipe out tax liabilities and deliver anything left over in the form of checks.

He also wants to tax oil companies and use the money to give checks to the poor to pay for high fuel costs, or anything else.

* Many Americans recoiled at the weak federal government response to Hurricane Katrina in 2005.

* Republican George W. Bush turned into one of the most unpopular presidents in modern history. Just as American revulsion at Democrat Jimmy Carter in 1980 helped usher in the Reagan era, rejection of the Bush era could help swing the pendulum the other way.

At the same time, the party has new power centers in liberal groups such as Moveon.org and blogs such as dailykos.com, where antiwar fever and anti-Bush anger are magnified.

They helped propel Howard Dean to an early lead for the 2004 Democratic nomination, lost, then regrouped to help defeat pro-war Democratic Sen. Joseph Lieberman of Connecticut in a 2006 primary, though he went on to win re-election as an independent.

“Enormous dissatisfaction with the Republican Party has brought out the base more,” said Democratic Gov. Bill Richardson of New Mexico.

Ever more vocal and influential heading into this year’s election, that base fed the sense that the party should “return to its core values,” Richardson said. “The rise of the Internet and bloggers have made the party more progressive.”

Schumer also thinks that it’s all part of a historic cycle in American politics — or at least he hopes it is.

He said Americans encouraged and grew accustomed to an activist federal government during the Great Depression of the 1930s, one that Democrat Franklin Roosevelt delivered and Democrat Lyndon Johnson accelerated in the 1960s.

They grew disenchanted with that big government by the 1970s, a government seen as corrupt in the Nixon days, unable to stop oil crises or runaway inflation, and unable to rescue Americans whom Iran had taken hostage.

That sentiment drove U.S. politics for years, helping Republicans win five out of seven presidential elections and giving the Democrats two victories only when they nominated a Southern centrist in Clinton.

This year, however, Democrats rejected Hillary Clinton, who, while arguably more liberal than her husband, was to the right of Obama on big issues such as tax policy and had a history of being more hawkish on national security.

Perhaps it’s because Obama was simply a more appealing candidate. But it also might be because times are changing.

Now, Schumer said, Americans feel shaken by big forces such as globalization, terrorism and a sputtering economy. “The whole world changes, and people feel a little bit at sea, and they need help,” Schumer said.

Whether the country will turn to a resurgent-liberal Democratic Party to navigate that less-certain world won’t be known until November. But for Democrats watching their national convention, it’s clear they want something very different.